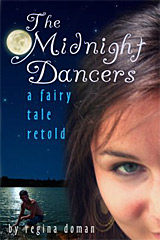 It truly is delightful to see your favorite fairy tales given new life. I always liked the story of the Twelve Dancing Princesses and I like it even better as a novel, I think, than as a fairy tale. Did I just say that? Yes, I think I do like it better for the novel plunges into the depths of the story and teases out a Christological significance in the soldier’s role.

Like the other novels Regina Doman’s Fairy Tale series, Midnight Dancers is based on a classic fairy tale, and like them it is a story about ordinary people in an extraordinary universe.

In this incarnation of the tale, the twelve dancers are the teenage daughters of Colonel Robert Durham and his wife, Sallie. It’s a Brady Bunch scenario times two: He’s a widower she’s a widow, they each had six daughters when they married. The girls now range in age from 11 to 18. There are also two much younger brothers, the product of this second marriage. The girls live a fairly circumscribed existence, their life centers around the church they attend. They aren’t readers except for the occasional Christian romance novel. This leads to a general boredom and malaise. Until one night they discover a secret stairway, a remnant of the Underground Railroad, that leads from their attic dormitory to a small cave on the beach below their house and thus begins their night-time adventures.

The story is told from the point of view of a soldier, Corporal Paul Fester, who met Colonel Durham (and saved his life) on an unspecified Middle Eastern Army base, and the eldest of Colonel Durham’s daughters, Rachel. Colonel Durham suspects that something is going on with his daughters and invites Paul to try to discover what it is. Rachel and the other girls suspect Paul to be in league with their father. Rachel at first resists him, then finds him useful, and finally is challenged by him to question her preconceptions about the world and about herself.

Rachel is not only the oldest, she’s naturally the leader of all the girls. She resents that her parents give too much of their time and attention to their church, making it the center of the family’s life to the detriment of family life. She’s a sad soul who thinks that goodness is boring and is looking for some excitement and to break free from a life that gives her energy and passions no creative outlets.

Paul is Catholic, a juggler and an army medic who plans to go to medical school. He is mature for his age, comes from a good family, has a solid formation in his Catholic faith and a good grasp of the spiritual life. Because the Durham family are fundamentalist Protestants, some tension develops between Paul and the girls, some of whom have convinced themselves that Catholics are pagan goddess-worshipers. Paul takes on a role as mentor and protector to the girls and dispenses advice to Colonel Durham, the well-intentioned father who doesn’t quite know how to get a handle on his crumbling family situation.

Although I thoroughly enjoyed the novel, found the characters engaging and the story fast-paced and quite gripping, I thought this tension between the good Catholic boy and the rebellious Protestant girls was possibly a weak spot in the novel. Not so much a weakness in plotting or character development, it unfolds quite naturally. However, because the novel is aimed at Catholic teens I wonder if it might tend to create an false impression that Catholics, merely by virtue of being Catholic, have it all figured out, have no communication problems within their families, no problems with poor formation in the faith, etc while, on the other hand, Protestants are lost and need Catholics to rescue them. I think I’d have preferred the girls’ family to be Catholic as well so that the issues that arise don’t seem to be a Catholic vs. Protestant thing. It worked well on the level of the story, but I’d worry on the attitude it might inculcate in young readers, a sort of Catholics are better mentality. Objectively speaking, of course, the Catholic Church has the fullness of God’s revelation which the Protestant churches lack; but on the level of individual beliefs it’s a much more mixed bag. Many individual Protestants are much more solid both in family life and in their relationship with God than many individual Catholics.

That said, I thought the spiritual struggle at the novel’s heart was quite gripping: the girls think goodness is boring and rebel against their church simply because faith has not been presented to them as something daring, exciting, dangerous and romantic (as it truly is if one really dares to live it).

The themes and situations the novel develops are mature and I’d use caution with younger readers, but I don’t feel they are inappropriate. The novel portrays the world and its dangers as they really are. And it shows that people cannot flirt with evil and escape unscathed. A price must be paid for the girls’ deception and flirtation with danger and Paul steps in as the sacrificial victim to bear the blows.

The Midnight Dancers is an exciting story of good and evil, a romance and an adventure story both that makes goodness seem truly exciting and attractive and shows evil to be ugly and vicious. I think it will appeal to young readers and to older ones, to girls especially because of the romance elements, but also to young men who are looking for strong male role models who display spiritual and physical courage in the face of adversity as well a mental agility and an ability and eagerness to explain and defend the faith.