Excitement of the Day: A Field Trip and a Storm
Add comment
Share:FacebookTwitter
Uncategorized

Excitement of the Day: A Field Trip and a Storm

We just returned from a family outing, Bella’s first experience of a movie in the theater. With some carefully planning and a strategic feeding just before we left we were able to watch the entire film, X-Men III with no interruptions, no fussing, no need to leave the theater. Thanks, Bella!

I enjoyed the movie, a fun action flick, just what I expected it to be. While we were in the theater we missed a huge thunderstorm. As we were buckling Bella into the carseat lightning flashed across the sky and thunder cracked. There must have been a big hit because a firetruck passed us going in the direction of the firestation. At least a two alarm fire, then.

When we pulled into the driveway at home I got an idea of just how big: hailstones in the planter roughly the size of quarters. That’s why there we so many leaves on the streets! Paul, who lives a couple of blocks away, just IMed Dom a picture of the hailstones right after they hit. Easily the size of golfballs!

There was a report not too long ago of a funnel cloud up in Topsfield, heading north, away from us. Now a nother storm cell moving in, it’s dark, heavy rain, dramatic lightning, more hail, the size of peas. Makes me feel like I’m in Texas. We don’t really get thunder storms very often in Massachusetts. 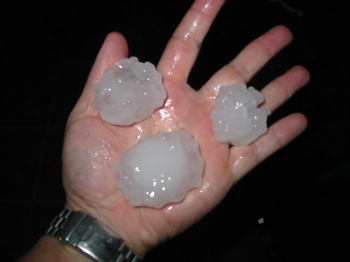