By Melanie Bettinelli on February 14, 2020 in books 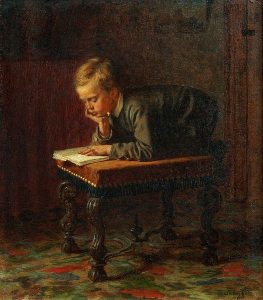 (I’m still, perhaps madly, hoping to maybe catch up on my reading notes for the last few months of 2019, but in the meantime, I put together this list for a friend and thought I’d share it here.)

My favorite books that I read in the past year:

1. I re-read The Brothers Karamazov (Richard Pevear and Larissa Volokhonsky translation) and enjoyed it so much more this time. One key difference was that I read it with a Facebook group book club, which kept me accountable and gave me people to discuss the book with. Often I was reading a week or so behind the group, but even then other reader’s questions gave me a question to have in mind as I read and that helped to focus my reading. Also, I read a different translation (last time I read the Constance Garnett translation). I found the Pevear and Volokhonsky translation much more enjoyable. It felt clearer, more colloquial, and just flowed better. Also, I was not postpartum this time. I’m not sure which of those made the most difference; but I suspect not having baby brain was a distinct advantage.

2. Can You Forgive Her? by Anthony Trollope, part of his Palliser series, but worked well as a stand-alone novel. This one I also read with an online book club and I kept reading ahead because it was a can’t put it down book.

3. Like by A.E. Stallings– my favorie poetry book of the year. I love her work. She’s an American poet who lives in Greece, married to a Greek journalist. She does translations from Latin and Greek but also write very fun and clever verse. She’s a formalist who always amazes me with her ability to match form to content.

4. Craeft by Andrew Langlands, non fiction book by an archaeologist who is famous for consulting on British living history shows. He looks at traditional crafts and it’s a fascinating read, hard to describe or summarize, but I really loved it.

5. Emily Wilson’s translation of The Odyssey— I listened to this one as an audiobook. I really loved it. Very fresh and modern and yet also very respectful of the original text. And her translator’s notes were pure gold too.

6. The Art of Biblical Translation by Robert Alter I didn’t get to finish this one, it was a library book. But I plan to go back to it soon. I really loved his insights into the Bible as literature, as poetry, and to the art of translation, what is gained and what is lost. And why it’s important that translators read contemporary literature in their target language– aka, why translators who don’t know modern English literature make stupid mistakes about what does and does not work in English.

7. Reamde by Neal Stephenson– A techno-thriller with a heart. It managed to be a novel of ideas, that was also fast paced and action packed and had interesting characters, particularly interesting women characters. And unlike most of Stephenson’s novels, I didn’t hate the ending.

8. The Buried Giant by Kazuo Ishiguro– I didn’t know what to expect in this novel and it was interesting to wrestle with genre and narrative voice. Set in Medieval Britain, but the narrator is strongly modern and keeps reminding the reader of the strangeness and unknowability of the medieval world. I really liked the meditations on memory and identity and love.

9. The Sparrow Child by Meriol Trevor (out of print) — Meriol Trevor is one of those authors I have fallen in love with in the past couple of years and I’m hunting down as many of her books as I can though many are out of print… She writes both children’s books and novels for adults and biographies. She wrote a definitive biography of Cardinal John Henry Newman (who was canonized last year.) I still have yet to meet a book of hers I do not like. This one is reminiscent of many of her other children’s books. A boy arrives to stay with relatives he’s never met, they are all older and live in an isolated house in Cornwall. There is a girl there, the daughter of the cook/housekeeper, and legends of a lost chalice that might be the Grail itself. There is a very complicated web of relations and an old mystery, hints of perhaps attempted murder. There’s a ruined chapel and a threat and through it all runs those hints at the Grail legend. I love how the most of her characters are Catholic, but it never feel like she’s making their faith the point of the story. It’s just one strand, an important one at times in terms of motivation and theme, but not intrusive and never preachy.

10. Proust and the Squid by Maryanne Wolf– A fascinating nonfiction book about the history and neuroscience of reading. The first section traces the ‘natural history of reading’ and the evolution of the reading brain. It tries to unravel how our brains acquired the ability to encode and decode meanings with markings and what fundamental structures were adapted to make our brains capable of reading. The second section looks more closely at the neurology of reading, tracing the various regions of the brain that the process uses and in what order, a complex almost instantaneous process in those who are fluent. The third section looks at what happens when people are not able to acquire reading skills easily, attempting to pinpoint the neurology of dyslexia, or rather the neurologies because dyslexia isn’t just one thing but many related things. Wolf is a very clear writer, one who weaves literary allusions through her text and who is as conversant with Mark Twain and Proust as she is with Dick and Jane and Frog and Toad.

11. Goldengrove Unleaving by Jill Patton Walsh– Originally published separately as two novellas, they were later combined into one volume and really they work well together as two halves of one story. I grabbed this because of the Hopkins allusion. It’s an interesting story that’s sort of hard to describe. The first part is a sort of coming of age story and the second is an end of life retrospective. The second half has some hard themes and I don’t want to give away plot points, but if you’re sensitive about death/danger of a child, give it a pass.

12. The Young Wizards series by Diane Duane. Simply the best fantasy series I’ve read in a long time. They’re technically juvenile fiction; the protagonists are 13 and 12, I think. The series predates Harry Potter and in my opinion is much better. It follows two young Long Islanders who become wizards and have to save the world. The magic is very science friendly, as in they always have to work with and through the physical laws of the universe and magic is always work and requires energy. I love the fight against evil which is framed in terms of working to preserve life and fight against entropy and works with the idea of a magical speech which allows the wizard to speak a language which works because it corresponds to the deepest nature of things.

5 Responses to Favorite Books of 2019