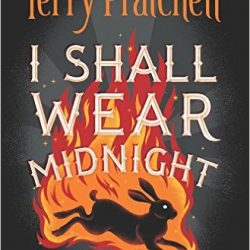 By Melanie Bettinelli on January 28, 2017 in books

Terry Pratchett’s five Tiffany Aching novels, a subseries of his Discworld fantasy novels, are written for a younger audience. The heroine, Tiffany, is nine at the beginning of the first book and ages about two years between volumes, being in her late teens in The Shepherd’s Crown. As seems typical with this sort of series […]