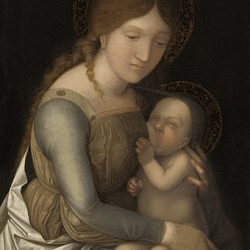 “On Uriel there had been the magnificent creatures. On Camazotz the inhabitants had at least resembled people. What were these three strange things approaching? They were the same dull gray color as the flowers. If they hadn’t walked upright they would have seemed like animals. They moved directly toward the three human beings. […]