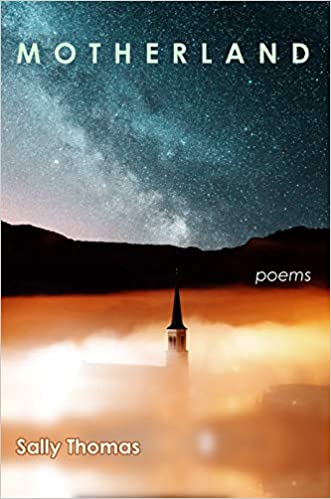 Last month– is it already last month?– I had the privilege of listening to a poetry reading by my friend Sally Thomas, whose new collection, Motherland has just been launched. While this crazy pandemic time of social isolation is a hard time to launch a book, through the wonders of the internet I got to sit in on a delightful reading which I might not otherwise have had a chance to experience. (You can watch the recording here.)

Confession, I did sort of nod a few times because listening to poetry on a warm Friday afternoon is mildly soporific. But not at all because of the poems themselves or because of Sally’s reading, which was engaging and really quite riveting– I encourage you to check it out, you will not be disappointed.

As you might expect from the title, many of the poems in the collection explore the theme of motherhood. Thomas is a mother of four. I first encountered her writing via a delightful essay on homeschooling in First Things and then in other essays and then, more personally, in homeschooling circles where she’s become something of a mentor.

David Middleton’s Foreword sums up the various meanings of the title better than I can:

“The title of her collection—Motherland—- captures, in a single word, this fuller world: Thomas’s own motherhood; Mother Nature; the maternal birthing of poems; English as Thomas’ mother tongue (she lived for some years in Cambridge, England, the Mother Country, where some poems are set; Mother Church (Thomas is a convert to Roman Catholicism); and Mary as the Mother of God, especially as Mary is seen in the remarkable sequence, Richeldis of Walsingham, which closes the book.”

The first poem in the collection, “Change Ringing,” is also one of my favorites. It details a mother’s thoughts as she nurses her baby and listens to nearby church bells. I love the connection of the church bells and nursing because it reminds me of an essay I read once comparing motherhood and monastic life that compared the demands of motherhood to the monastery bells, as demands that pull us out of ourselves and into service of God. But in Change Ringing the nursing and the bells are both framed as a memory, looked back on from some much later date. “You remember” it starts:

“You remember church bells, mainly
A wordless shape-note singing
On the sky. Nightly, daily,
As the baby fed, their ringing.”

It’s a poem about motherhood, about the rituals of motherhood– and perhaps it is also a lovely imitation of the hazy wandering thoughts of sleep-deprived nursing mothers– but also a poem about the strangeness of memory which doesn’t always latch onto the things we think are most important:

“ . . . You try
To sort through images cluttering
Your mind’s dark attic, and
That’s what you come up with: bells.
Not your baby’s fisted hand,
His warm and varied smells,”

I love ‘the mind’s dark attic’– and more and more as I age I find my own mind is a dark attic, my own memory frustrating and unreliable. This poem resonates with me on so many levels.

Other poems probe the further boundaries of memory. “Hindsight,” for example, has a lovely image of memory compared to a seagoing boat that travels “down the world’s hazy curve is lost to sight.”

“My memory likewise sets out from the known
World of things I’m sure I saw and heard,
Into murky unmapped waters.”

It occurs to me that this also seems a good description of many of Thomas’ poems: setting out from the known world of things into murky, unmapped waters. I love how she captures both the concrete, physical details of a specific time and place and also the intangibles like the sometimes frustrating workings (malfunctions?) of memory:

“I remember how things looked, our narrow flat,
the lane rain-silvered. I can almost hear
Wind shivering through our windows. More than that?
It isn’t there. It isn’t anywhere.”

Or “Aunts” which ponders a photograph and muses about what we cannot know about the past:

“It was long ago, and they are dead.
I never knew them, but I think about them,
The story left untold becomes a story
I can tell myself until it’s true.”

In the book’s final poem sequence, Richeldis of Walshingham, the lines between past and present blur as poems move backward and forward in time, each a small glimpse of a particular place— the shrine of Walsingham, at a different moment in time, and yet all of them linked like pearls on a string. It reminds me of Eliot’s Four Quartets and the exploration of the intersection of the timeless with time, the moment outside of time and the elusiveness of memory.

Another of my favorites in the collection is “Sonnet for Ash Wednesday” (On a tomb in Little Saint Mary’s Church, Cambridge). An occasional poem, the poet is (presumably) in church for Ash Wednesday and trying to read the partially obscured inscription on a stone that is partially covered by a carpet.

“Here lyeth . . . (Sarah?) Drake beneath the floor,
A Persian carpet lapped across her stone,
So all you see is —rah and Cambridgeshire
And that she was the cherished wife of someone. . .”

This “cherished wife of” ties this poem in nicely with the theme of marriage which the collection returns to again and again. Marriage, is of course, the ground in which motherhood flourishes and in many of the poems there is a lovely first person plural, we, the voice of a wife whose identity is rooted in and nourished by her marriage.

Also it serves a memento mori, whose final couplet echoes the traditional exhortation of Ash Wednesday: Remember, man, that thou art dust and to dust thou shalt return.

“. . . And is her name
Written where it matters, legibly,
Or will we all, given the same name— Dust—
Forget at last who was forgotten first?”

Ritual, both public and private, religious and familial, is one of the threads that binds this collection together. I especially love the attention to the domestic rituals that make a family a family.

‘Anniversary’ celebrates a marriage by reveling in the mundane rituals of making a bed, of laundry, the small gestures by which a married couple affirms their long-lasting love.

One of my all-time favorite poems on motherhood, which I quote frequently, ‘For You’ is about a familiar parent-child ritual of question and answer. The child asks “Am I your favorite?” What is a mother to do who wants to affirm that child and yet not create sibling rivalry by playing favorites? Addressed to the child in the second person, the mother answers yes in a way that elegantly threads the needle:

“ As every breath I take’s
My favorite breath. If, say, you’re eight, that makes
You my favorite eight-year-old.”

I love the playfulness of the affirmation and the side-step: you’re my favorite eight-year-old because you’re my only eight-year-old; but at the same time, you really do occupy a place that isn’t secondary or lesser. Most of all the poem probes into the mystery of parental love, which is never diminished by a multiplicity of objects but rather grows as the family grows:

“You are my favorite child right now, because
You stand before me, asking that my heart
Declare, You first, you always. And it’s true.
It works this way. Love’s strange elastic laws
Grant each child its undiluted part,”

‘Lamplight’ is another poem in which the mundane– the house, in this case — is revealed as something more, and that more touches on the mystery of Home. The poet steps out her door and in the contrast between the starry night and the veiled glow coming through the windows has a moment that ‘makes strange’ as Seamus Heaney says. Like many of Thomas’ poems it has a lovely attention to natural detail in the “dry/ Black stalks of the Black-eyed Susans beneath the window”. But I think what enchants me most is the self-conscious correction that points to something more than the mundane in the lines:

“And stood in the garden looking in—
Or not in, exactly. The curtains hid
Bookshelves, wardrobe, mirror, turned-back bed,
All the room’s clear features.”

The hidden life of home, revealed as a mystery even as it is concealed by the curtains, is a delightful paradox and in that paradox, that glimpse of mystery, there is also a widening of vision that broadens the poet’s perspective from the personal to the universal, from the ordinary to the wondrous. This seems to me the Catholic imagination at work, the mystery of God incarnate in ordinary flesh leads to a sense that any ordinary object can become a channel of grace, a path into the mysteries of the universe.

If you can’t tell by now, I highly recommend this collection. I’ve now been working on this review for two weeks and am just about come to the conclusion that I should just stop and call it enough. I could keep going and telling you about more and more poems and moments and fill up more pages than you might care to read, but I think it’s about time to put this review, and myself, to bed.