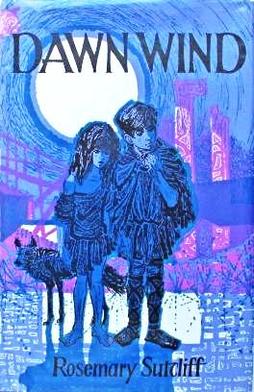 Dawn Wind by Rosemary Sutcliff is a historical novel that takes place in the years after the British have lost a decisive battle to the Saxon at Aquae Sulis. The novel ends as Aethelbert consolidates his power as king of the Saxons in the south and the monk Augustine arrives as a missionary from Pope Gregory in Rome. The protagonist is a young Roman-British boy, Owain, a Christian who speaks both Latin and the Celtic tongue of the British tribes, who by this point have largely been driven into Wales, Cymru. Owain’s father and brother were killed at the battle of Aquae Sulis and Owain is left an orphan to make his way alone in the world. He takes from his dead father’s hand a ring with a dolphin on it, which fans of Rosemary Sutcliff’s novels will recognize from her Roman Britain books about the Aquila family: Eagle of the Ninth, The Silver Branch, and The Lantern Bearers. Owain, then is a descendant of Marcus the legionary who in Eagle of the Ninth decides to stay in Britain rather than returning to Rome.**

After the battle, a wounded Owain stumbles north, heading for the city of Viroconium from whence the tribes, under the king Kyndylan had set off for Aquae Sulis. he is accompanied by one of the dead king’s hounds, whom he calls, simply, Dog. Sick and feverish, Owain winds up fainting on the doorstep of Priscus and Priscilla, an old Roman couple who nurse him back to health. They want to adopt Owain as their son and leave him their farm, but he is fixated on the idea of Viroconium, he can’t let go of his hope that others survived the battle and returned to the town.

When he finally gets to Viroconium, the town is deserted and in ruins, having been sacked by the Saxons. Owain and Dog camp in Kyndylan’s deserted palace and there they find Regina, a girl who refused to run away with the other British and has been living on what she can scavenge in the ruins. Regina was already an orphan and a beggar before the Saxons came she never knew her family and lived with an old woman who made her beg for her. She attaches herself to Owain and when he decides to leave she goes with him. They decided to head south to the coast, to try to find a boat they can steal to go across the sea to Gaul, to Armorica where there are Britons.

But they never make it. Regina gets sick from hard travel, bad nutrition, and getting stuck outdoors in the cold and the rain too many times. They find shelter with a Saxon family, the mistress of the house begins to kindly nurse Regina. Then Owain trades his freedom for Regina’s safety. The master of the house does not want another British thrall, but there is a stranger staying at the house because his horse threw a shoe who agrees to take Owain on as his thrall and pays the master of the house a gold coin to look after Regina. Owain agrees and leaves Regina there because he thinks the mistress of the house will be kind to her, and because he doesn’t have much choice.

Owain’s new master, Beornwulf, is impressed by his courage (evidenced by his war wound from Aquae Sulis) and his willingness to sacrifice for Regina, who he confesses is a stranger who he has known for only a matter of months. So Owain travels far from Regina to Beornwulf’s farm on the coast. He becomes a member of the household with the iron thrall ring bound around his neck to signal his servitude, and yet he is more and more trusted because Beornwulf sees that he is smart, capable, and sound in judgment. He is a companion to Beornwulf’s son, Bryni, and he helps a runaway mare to give birth when the time comes.

Eventually he saves Beornwulf’s life when he is shipwrecked and thereby wins his freedom. But Owain exchanges another six months of servitude for a sword. He wins his sword and his freedom, but agrees to accompany Beornwulf into a battle against Ceawlin of Wessex, the leader of the Saxons who defeated Kyndylan and his father at Aquae Sulis. He swears an oath to fight with the Saxons under the leadership of Beornwulf’s foster brother, King Haegel.

And then Owain finds out too late that there is a British emissary to Haegel, the British tribes have agreed to join forces with the Saxons against Ceawlin— if he’d only waited, Owain could have been fighting alongside the British instead of with the Saxons. And yet… the British emissary, Einon Hen, begins to discern that there might be a greater pattern at work in Owain’s decision to fight with the Saxons out of a kind of friendship with Beornwulf. This becomes more and more clear over the course of the novel as again and again Owain chooses to delay his freedom in order to take care of Beornwulf’s family. First, when Beornwulf is dying, he agrees to mind the farm until Beornwulf’s son, Bryni comes of age. Then he agrees to another year so that he can protect Beornwulf’s daughter from an unwanted marriage, which her mother doesn’t have the strength to push back against. Einon Hen sees the beginnings a bridge of trust that has been built between the Saxons and the British, in Owain’s choices and it leads him to hope for the future of their two peoples.

Sutcliff plays on the light imagery in The Lantern Bearers, the novel in which Roman Aquila sees the Legions leave Britain for the last time, marking the beginning of the Saxon conquest of Britain. Aquila despairs at the thought of the light of civilization going out with the advent of the Saxon barbarians. But in Dawn Wind Einon Hen sees the coming of Augustine as the sparking of a new flame of civilization:

“We spoke together… of looking back through the storm and darkness of these years, to see the last gleam of lantern far behind; and I said something to you then, I think, of the hope of other lights as far ahead. For the space of two men’s lives at least, we have stood alone, we in Britain, cut off from all that Rome once stood for, from all that we once thought worth dying for. And today we have joined hands with those days of the Long Wandering, before the Saxon-kind became the things again— a light clasp as yet, and easily broken, but surely it will strengthen, both by the ways of statecraft, and with every man and woman who comes— as they will come, though the time for the Queen’s multitude is not for a long while yet— to Augustine and the Christian Church. . . . Not the dawn as yet, Owain, but I think the dawn wind stirring.”

Augustine makes a similar observation, after wa
tching Owain gentle the wild white horse that is sacred to the Gods:

“The high King was telling me a while since, how in the elder Saxon-kind, whenever the people sought new pastures, they would send a white horse ahead to lead them. And not the White Horse leads them again, out of old things into the new. . . . Say to Aethelbert of Kent for me that I have seen Frey’s Horse, who was far beyond all other men’s handling as though he were the North Wind, bend his neck in acceptance under a Christian hand; and that I take it joyfully as a sign from my God.”

I really like Sutcliff’s long-ranging view of history and Dawn Wind was one of my favorite novels in the sequence, Partly, I suppose I like that it has more explicit reference to Christianity, both in terms of theme but also personal practice. But also because I really like Owain’s ability to defer his own wants and desires for the sake of serving others: first Regina, and then Beornwult and his family.

And I really really liked the ending of this one: Owain and Regina meeting again in the ruins of Viroconium and her returning to him the dolphin ring. It really was quite perfect.

** According to Wikipedia, the whole sequence of books which traces the destiny of the Aquila family is nine novels long: Eagle of the Ninth, The Silver Branch, Frontier Wolf, The Lantern Bearers, Sword at Sunset, Dawn Wind, Sword Song, and The Shield Ring. But in a larger sense, I think all of Sutcliff’s historical novels could possibly be read as one long sequence, developing themes and motifs about invasion, conquest, assimilation. Someday I’d love to have a full collection of her novels and read them all in chronological order to trace the development of these themes over time and place.