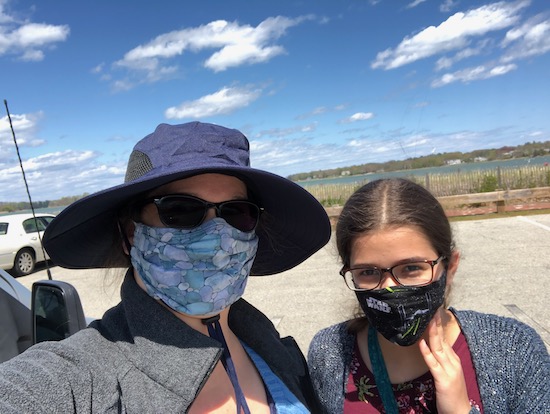 I was very resistant to wearing a mask. I don’t like the feeling– I’m asthmatic and anxious. I can’t breath. Last time I had to wear a mask at the doctor, I almost had a panic attack. I had to take it off.
But even before our town’s health department made it a local ordinance about half the people I saw in the stores were already wearing them (Massachusetts is a pretty hot zone, you know). I knew it was coming.

And, to be honest, I was starting to feel almost as uncomfortable not wearing a mask as wearing one. I don’t want to make the people who work in the stores who have to be breathed on by strangers all day even more uncomfortable. So I got a mask and debated about wearing it but couldn’t quite bring myself to get over my discomfort and actually wear it into the store.

I went into the store with a bandana around my neck in case I was asked to wear a mask, but I just left it around my neck. Or I kept the mask in my pocket.

Then our local health department required it and honestly it was kind of a relief because I already felt I probably should be doing it for the sake of other people’s comfort.

Honestly, I still don’t love it. But I’ve now worn a mask for three or four big grocery shopping trips (each takes me about an hour and a half) as well as for more outings to the pharmacy. I’m getting used to it and don’t feel nearly so strangled as I expected I would. Having to do it helped me get over that choking feeling. I still don’t love the glasses fogging but I’m dealing. (Having to take my glasses off to see my shopping list, sometimes, but dealing.)

So here’s where I am now: I think wearing as mask at times like this is something I can do for other people to make them feel I’m not a threat. It’s a small sacrifice. And having it be mandated by the health department and then by the state doesn’t make it less of a sacrifice. But I’m consciously choosing to make it a sacrifice of love. Offering it up as I was taught to offer up all pain and discomfort on behalf of others.

I’ve been thinking about medical workers who have no choice. Who have to wear masks and work long hours in them despite the fact that many of them likely find it as unpleasant as I do. If they can do it, so can I. I think about the patients who are sick, of those who are dying. And I can do it for them. I can offer my discomfort as a sacrifice and as a prayer for all those doctors and nurses who sacrifice for others.

But… maybe you can think of the person behind the counter and wonder if you’re being called to overcome your own discomfort for their sake. A person working at a grocery store or pharmacy who might be scared of getting sick, but who desperately needs the paycheck. Who might feel more comfortable if you aren’t breathing on them. Maybe you can think of it like St Therese, offering up a discomfort for someone else? Maybe it seems too hard. But what if doing a hard thing for someone else is worth it?