On Saturday Bella and Sophie participated in the BSA polar challenge. They had to be up at 5am so they could ride to the event with the other girls in their troop.

Their scout troop is really small, only four girls– that’s including Bella and Sophie. Too small to compete as a full patrol (which has a minimum of five scouts). So they teamed up with another girl troop from a neighboring town. Bella and Sophie joined one patrol and their troop-mates joined a different patrol.

They were only there for a half day because their scout master, who drove them, had been sick and wasn’t up for a full day. But they were able to participate in five events: build a shelter, orienteering and semaphore, track identification, ice rescue and first aid (in which they had to rescue a scout trapped on the ice and then give her first aid, including a splint and crutch for a broken leg), blindfold building (in which the whole patrol was blindfolded except for the leader who had to direct the other scouts in putting up a tent).

They had a great time and came home bubbling over with stories. Evidently, according to the scout master, Bella was rocking it on the animal track identification and semaphore. 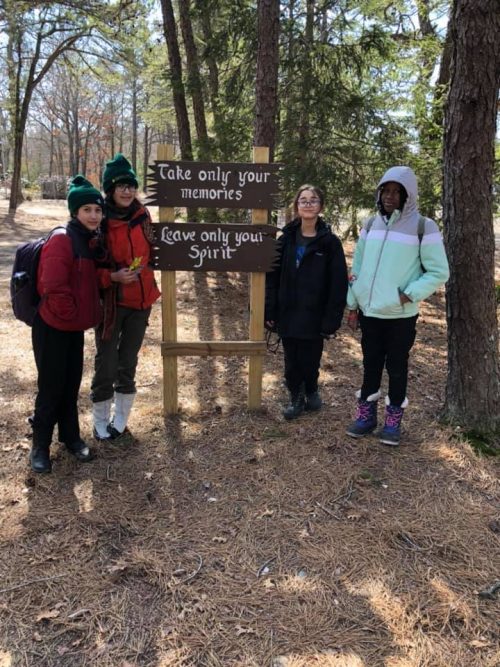 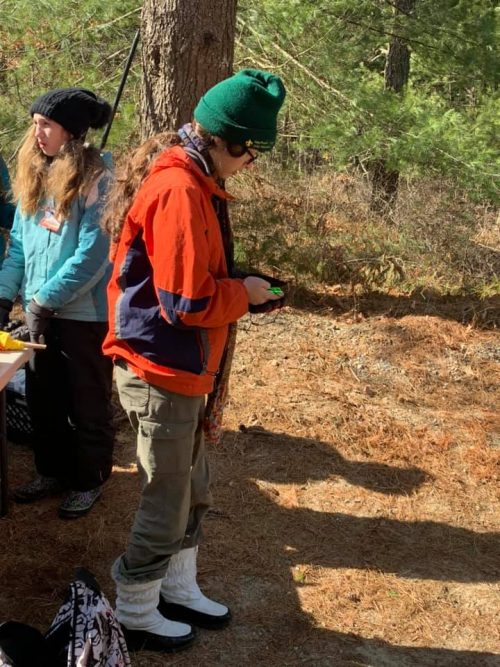 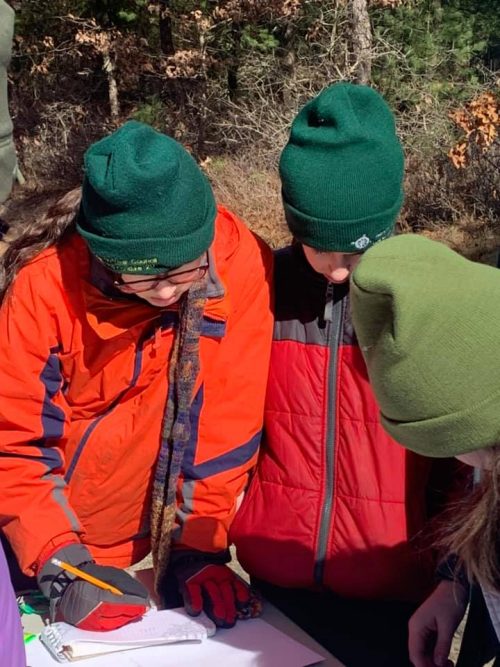 One of my most recent food discoveries has been the meat pasty. I mean discoveries in terms of cooking, not eating. I had my first meat hand pie in England in the late 90s. But making them had always seemed like a lot of work. I’m intimidated by pastry. But we had a lot of leftover pulled pork in the freezer which no one wanted to eat and one day we were pondering what you could do with it. And somehow we got the idea of putting it into pastry as hand pies. But I never got around to it.

And then one day a few months ago we had a bunch of leftover pot roast which had been in the fridge and no one wanted it. And I thought again about making something like a Cornish pasty. I looked up some recipes and found one that called for leftovers. And I did it– added some potatoes and peas and mushrooms and carrots and made my own pastry crust… and they were very good, but too big, like huge calzones. The next time I tried it with some pulled pork and I made them half the size and that worked better, but the filling was a bit lacking in flavor. I thought: it needs some pineapple.

So today was my third attempt at pasties. I had some lamb that we’d grilled last summer, which was good, but there had been too much of it and no one, including me, really wanted the leftovers. So I put it in the freezer. And there was some more pulled pork in there too– one of those times when I made too much and we were too busy to eat the leftovers. So that too was in the freezer. I made the dough yesterday since I had a bit of time. It’s a huge batch: six cups of flour, four sticks of butter and that takes a while to blend and roll into separate dough balls. I really like this dough recipe I found that uses chicken stock in place of water. But am annoyed because whoever wrote the recipe obviously didn’t scale up the liquid when they wrote the recipe and it’s laughably too little liquid. So I’m having to experiment to figure out how much broth I should use. Between the chicken broth and the butter, it sure is a tasty dough.

I sautéed a bunch of carrots, onions, and celery, added some garlic, white wine, and some pan drippings from the last time I made roasted chicken. I diced some potatoes and steamed them in the microwave and then added them to the vegetables and cooked until they were almost soft. I divided the vegetables in two and added half to the chopped lamb and half to the pork. To the lamb I also added oregano, rosemary, and a sweet mint sauce. I meant to add peas, but forgot them. To the pulled pork I also added some minced pineapple, brown sugar, Aleppo pepper, and some tangy Japanese tonkatsu sauce.

I’m still learning how to work with pastry, but this time I think was better than last. I brushed them with egg wash and baked them in a hot oven. They came out really well. Next time I’m going to put more pineapple in the pork and put peas in with the lamb. 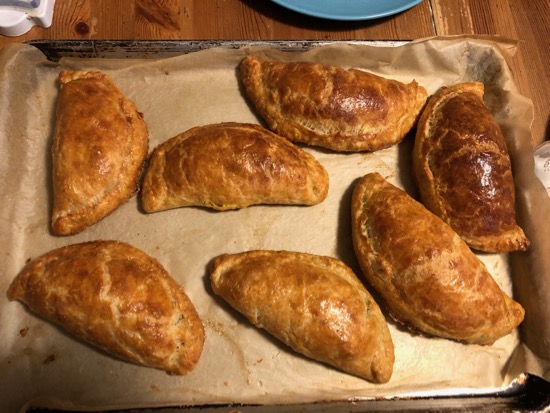 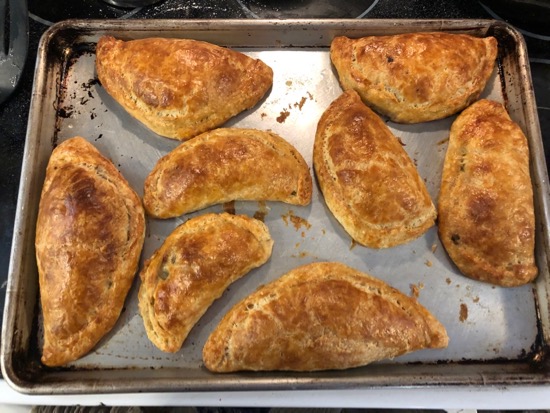 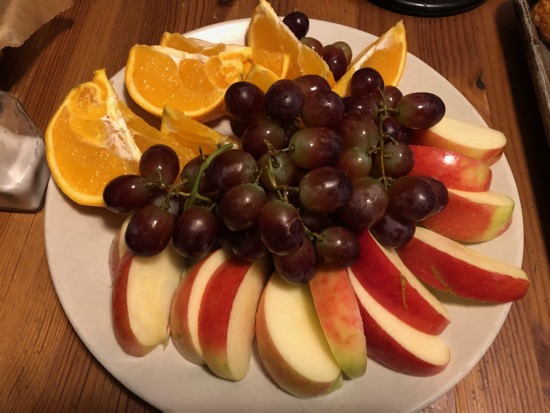 6 cups all-purpose flour (I subbed 1 cup of whole wheat flour)
3 teaspoons salt
2 cups vegetable shortening (I used butter), cut into small bits and chilled in freezer at least 1 hour
1 2/3 cup cold or beef chicken broth (still not sure about the amount, the recipe as written is skimpy on the instructions)
2 tablespoons cider vinegar

In a large mixing bowl, sift together flour and salt.

Set aside 1 cup of flour mixture in a small bowl.

Using a pastry blender or two forks, cut cold shortening or butter into the large bowl of flour until mixture resembles coarse crumbs.

Add broth and vinegar to the small bowl of flour; stir to make a paste.

Add the paste to the large bowl; stir with a fork until dough comes together in a ball.

Turn dough out onto a floured board, flatten the ball a little, and cut dough into 8 wedges. (I prefer 16 wedges for smaller pasties.)

Shape each wedge into a ball, flatten slightly, and wrap individually with plastic.

Chill in refrigerator at least 1 hour or up to 3 days.

Alternatively, the dough may be frozen at this point and thawed before rolling. (For space reasons I put half my dough in the fridge and half in the freezer. It took a while to defrost, but I found the dough from the freezer was easier to work with.

Place a metal cookie sheet or jelly-roll pan in refrigerator (or freezer if you’re like me and have a very crowded fridge).

Remove one piece of dough from the refrigerator. Lightly dust counter with flour and cornmeal.

Place dough on counter, cover with the plastic it was wrapped in, and roll dough into a 9- to 10-inch circle, about 1/8 inch thick. (I think my circles were about 5-6 inches and a little thinner.

Brush a one-inch border of egg white onto the bottom half of the circle.

Spread 1/4 cup of filling on bottom half of the dough, keeping clear of the egg white.

Fold top half of dough over filling, bringing edges together to form a half-moon shape. Pinch edges of dough to seal, brush border with egg white, then fold border toward filling and pinch again. (I also crimped it with a fork.) Place on cookie sheet in refrigerator.

Repeat with remaining dough to form 8 (or 16) pasties. Refrigerate pasties at least 20 minutes, or freeze.

Preheat oven to 425 degrees F. If you have a pizza stone, place it on a rack in the middle of the oven. Place sheet of pasties on top of pizza stone or on rack.

Before baking I brushed my pasties with the remaining egg wash, giving them a nice golden color.

Cover with a clean tea towel and keep warm until ready to serve.