Scrabbling of the Wind? 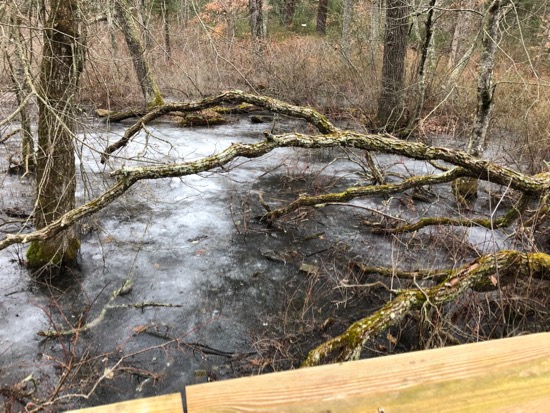 I’m having a hard time focusing tonight. There’s a heavy wind and it keeps making uncanny sounds. It sounds like something is scrabbling at the house, trying to get in. It’s not steady enough for me to ignore it. Rather it’s just infrequent enough to startle me every time it happens. Keeping me on edge. I’m pretty sure it’s really the wind since we always hear that sound when it’s windy and never when it’s not. But I don’t know exactly what is making it, so it bothers me. There isn’t a tree at this end of the house that could be tapping against it when the wind blows. And the sounds don’t coincide exactly with he other wind sounds, they happen when I can’t hear the wind in the trees. Maybe it really is rats or mice or something. I cannot even fathom what is making that sound. So I can’t stop worrying at it.

Also, for a great start to Lent, our dishwasher broke yesterday and now we are handwashing all the dishes. As annoying as it is to have to wash everything by hand, it’s also sort of soothing in a way. So I’m having a hard time being as upset as I could be. I also had a chance to introduce Dom to a hack my sister used to use long ago when she lived in an apartment with a broken dishwasher: she always used the dishwasher as a dish rack, putting the wet dishes into it to dry. It saved counter space. The kids are amused at putting clean dishes into the dishwasher. But it works.

Tonight we had rice bowls for dinner, a family favorite that everyone loves and a good way to use up leftover meats. I make a big pot of rice and season it with soy sauce, sesame oil, and sesame seeds. I serve it with lots of little bowls of toppings: scallions, bell peppers, radish sticks, carrots, avocados, cilantro, mint, mushrooms, celery, cucumbers, chopped romaine. And tonight we had some leftover steak, chicken, and salmon, too little of each to really make a meal out of but enough to add some protein to everyone’s bowl. The kids love making their own individualized bowls. I make mine as a salad with only a very little rice. We had furikake, kewpie mayonnaise, and sriracha which when mixed together made my salmon bowl taste a bit like a spicy salmon maki.

Of course rice bowls make a lot of dishes to do: all those little serving bowls with various toppings. But like I said, it was rather soothing. I washed, Dom dried. Somehow it felt rather cozy.

The Midwives Feared the Lord

While I was prepping dinner I was listening to the Office of Readings and I had a chance to ponder, as I chopped carrots into matchsticks, this passage from Exodus:

The king of Egypt told the Hebrew midwives, one of whom was called Shiphrah and the other Puah, “When you act as midwives for the Hebrew women and see them giving birth, if it is a boy, kill him; but if it is a girl, she may live.” The midwives, however, feared God; they did not do as the king of Egypt had ordered them, but let the boys live. So the king summoned the midwives and asked them, “Why have you acted thus, allowing the boys to live?” The midwives answered Pharaoh, “The Hebrew women are not like the Egyptian women. They are robust and give birth before the midwife arrives.” Therefore God dealt well with the midwives. The people, too, increased and grew strong. And because the midwives feared God, he built up families for them.

I just love that bit about how the midwives, because they feared God, did not do what Pharaoh ordered.

This reading put into context for me one of those things that always niggles at me: the Fear of the Lord. Yes, it’s one of the seven Gifts of the Holy Spirit. I certainly know people who were raised to fear God in much the same way that small children fear monsters and sharks and tigers. God was a scary rule giver, a stern judge waiting to punish. But that wasn’t the God I had encountered as a child or as an adult. So then… what do I do with this idea of Fear of the Lord?

And I always go back to a particular day when we were visiting a church that was new to us and I was pointing out a stained glass window to the kids and it had the seven gifts and I was trying to explain Fear of the Lord. It’s the one most people don’t quite get. God is good, God is love. He’s not the monster under the bed. So why should we fear Him?

And that’s where the midwives come in. Pharaoh orders them to kill the babies. They refuse because they fear God. Yet obviously they fear Pharaoh too, or else why would they concoct the story about the babies being born before they could get there. They fear the consequences if Pharaoh realizes they have disobeyed his orders. They do what they can to placate him. But… they fear God more than they fear Pharaoh. They fear God more like I fear hurting my husband or fear letting my children down or fear disappointing a friend. I fear breaking that relationship. And the consequences thereof.

After the Office of Readings and Evening Prayer, I put on the Daily Poem podcast. Dom was in the kitchen by that point– making rice, slicing steak and celery, helping set the table. It wasn’t today’s episode, but one from earlier in the week, Lisel Mueller’s “Monet Refuses the Operation” (You can read the poem here.) Dom said he really liked the poem and we had a lovely conversation about it.

Doctor, you say there are no haloes
around the streetlights in Paris
and what I see is an aberration
caused by old age, an affliction.
I tell you it has taken me all my life
to arrive at the vision of gas lamps as angels,
to soften and blur and finally banish
the edges you regret I don’t see,

The painter’s vision, his insight, is gained at the cost of suffering and infirmity. And so it is with poetry too. We gain knowledge of beauty through our illness and pain and the trials we endure. Wordsworth’s daffodils dance even more beautifully because he is recollecting them from the couch where it seems he is alone or ill or depressed. So often the artist stares into the abyss, goes down into the underworld of death and grief, and the art is the hard-won fruit of his toil and hardship.

And oh I love the imagery of the gas lamps as angels and the cathedral as parallel shafts of sun and:

The Story of God’s Love

This Bible story book was Bella’s favorite when she was younger. She begged for it to be read to her over and over and over again. When my dad came to visit, especially, she’d plop down next to him and have him read it cover to cover and back to the beginning to start over again as soon as he reached the end. It spoke to her so deeply.

But I don’t think Lucy has ever had it read to her. So this Lent, I’m reading it to her as a bedtime story. And when we read the introduction and first chapter tonight, it chimed so nicely with our discussion of St Patrick’s Summer, that I know it was the right choice. She really liked it.

Letting Swift River Go by Jane Yolen was Ben’s choice for bedtime story. It’s the story of the making of the Quabbin Reservoir, which supplies Boston with its water. It’s a sad story of a little girl who lived in one of the towns in the area which was flooded, the story of her losing her home and watching everything she loved be destroyed… and returning as an adult and learning to let it go. I confess my eyes were not dry.

The pictures by Barbara Cooney are lovely. She’s one of my favorite illustrators and oh she capture’s the beauty and the heartbreak of the story.