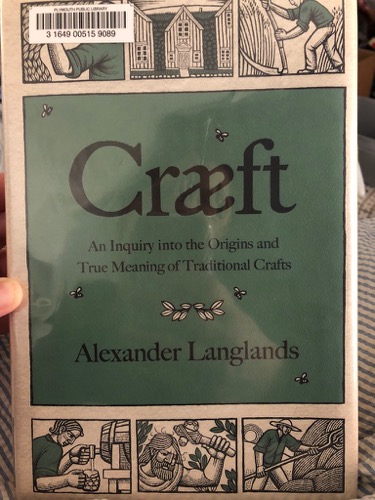 But even in today’s versatile use of the word craft there is only the faintest overlap with the definition craeft had when it first appeared in written English over a thousand years ago. The Oxford English Dictionary can find no one word to exchange like for like, for Old English craeft, and instead offers an amalgam of ‘knowledge, pwer, skill,’ and an extended definition where a sense of ‘wisdom’ and ‘resourcefulness’ surpass in importance the notion of ‘physical skill’. It would seem that we can’t quite put our finger on exactly what craeft was.

It is this inability to assign a precise contemporary meaning that justifies the ideas out forward in this book of a lost knowledge and of how traditional crafts, as we know them, are about so much more than just making. We don’t have craeft in our lives any more. Our Angl-Saxon ancestors certainly had it but at some point we mislaid it and with it its true meaning.

I went out for a rare dinner date with a friend this past December and after we ate our sushi she and I found ourselves with still more to say to each other so we headed for the nearby bookstore where we could browse and chat.

One book especially caught my eye: Craeft by Alexander Langlands. The unusual name with the ligature (a and e combined to form a single letter), the inviting green cover, the charming woodblock prints. I flipped through it and read the first paragraph and a few random paragraphs from various places in the book.

I looked at the table of contents: Making Hay, Sticks and Stones, the Skep-Making Beekeeper, Taming the Wilds, Weft and Warp, Under Thatch, The Shoe and the Harness, Seed and Sward, the Oxna Mere, Fire and Earth, The Craft of Digging, Baskets and Boats.

Oh yes, I need to read this one. I snapped a photo of it with my cell phone and when I got home I put it on hold at the library. 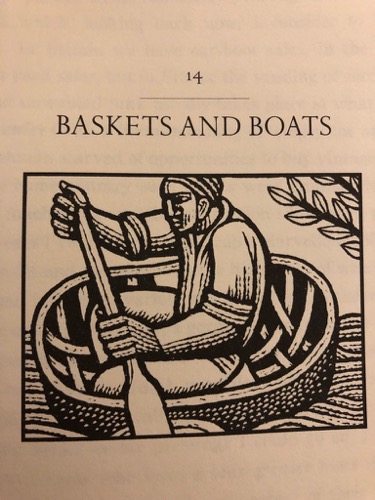 Now that I’ve finished it I think I’m going to have to buy a copy after all because it’s the sort of book I think will have value for my children as well. Bella has already dipped into it here and there, delightedly.

Craeft is more than just a celebration of traditional crafts by an archaeologist who became famous working with the BBC to help interpret the past in their historical farm series: Tales from the Green Valley about a farm in the 1600s, Victorian Farm, Edwardian Farm, Wartime Farm (I haven’t seen any of these, but I’d love to watch them one of these days). Craeft certainly investigates the history and development of various traditional crafts like pottery, basket weaving, and thatch making. But more than that it investigates an underlying philosophy of craeftiness, which Langlands defines at length in several introductory chapters. It’s also an idealistic and somewhat nostalgic polemic about sustainable economics. 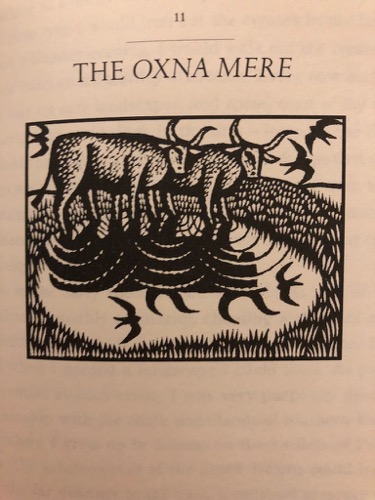 The book reads rather like a series of loosely connected essays. Some of the chapters feel a little underdeveloped. Some of them, like the chapter about Langlands’ visit to a traditional farmstead in Iceland feel like half finished thoughts and some feel like they could easily be developed into whole books in their own right, as they probably could.

The chapters I was most intrigued by were those that were about thatching, hedge making, and the Oxna Mere, the drinking pond for oxen. Langlands’ discussion of these crafts gets to the heart of what this book is about: these aren’t crafts that make a product that can be sold or given away, they are about living in a particular place and adapting the environment to meet one’s needs. My favorite part of the thatching chapter is his discussion about resourcing local material, adapting the craft to the local environment and the materials available therein. This theme comes up again and again. Craft in about a relationship with a place, about using what is at hand, about being part of a natural cycle of growth and death. Hedge making likewise is about shaping the environment to suit your needs, And some English hedges have been in place for centuries, man-made and yet also natural, living things. The oxen pond is a fascinating construction, a man-made drinking hole that has a mystery at its heart. 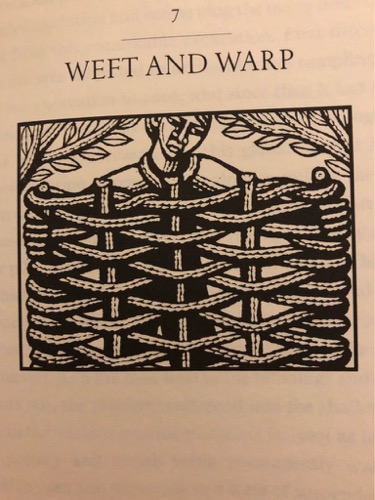 The chapter about warp and weft discussed production of woolen and linen cloth. It also had an interesting history of Nike making shoes from Harris tweed. And then it had a whole section on the making of hurdles, woven panels of wood. I know of hurdles from two places in my reading: the Irish name for Dublin, Baile atha Cliath, means ‘Place of the ford of the hurdles’ and from the lives of the English martyrs, like St Edmund Campion, who were dragged to the place of their execution upon hurdles. But I didn’t have a clear understanding in my mind what exactly a hurdle was. My mental image was much more like the bundle of sticks that the English call a “faggot” (Langlands describes learning to make those as well in the chapter on thatching). The only hurdles I know of from my American context are the things runners jump over in races. Landlangs takes us into the woods to meet with a hurdle maker and to watch him work. We learn about hurdles discovered at archaeological digs, and their importance in sheep farming and crop rotation.

Every chapter was a revelation to me, as Langlands steps in to get his hands dirty and to learn firsthand, hands-on, how to make. He’s a fascinating character, an author totally in love with his subject, a little crazy about it at times. And that passion makes Craeft a real joy to read.

Landlands concludes with a rather radical screed about sustainability and economics that I found at once a little over the top and at the same time charming and intriguing. We live in a perpetual growth economy: grow or die. It isn’t sustainable in the long run. So how do we shift directions? What will sustainability look like. Langlands is an archaeologist so of course his answer is to look at the past. Is it really feasible to return to horse-drawn plows? Perhaps if we fail to find sustainable, renewable energy that is one place we might have to look? But can we realistically feed todays’ populations using pre-modern farming techniques? It seems a rather romantic notion. Still, I’m something of a romantic myself. Sometimes. A little bit. At least Craeft is the kind of romance that does appeal to me. At least in books.

Now I’m going to go look up those BBC shows. 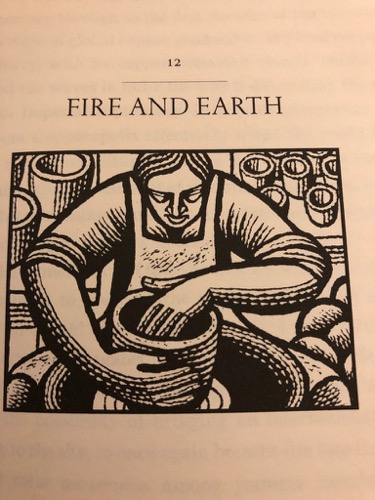