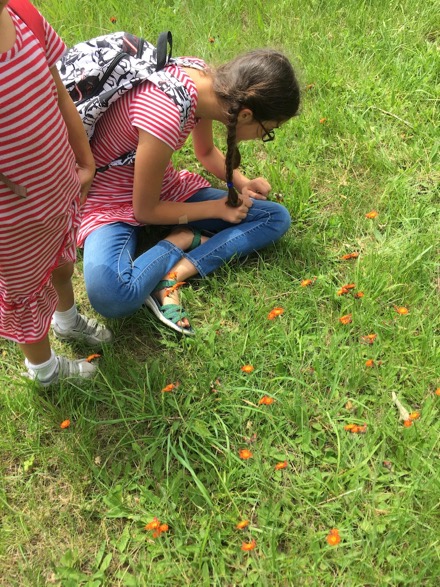 Last Friday (June 15) we went for a hike and picnic lunch at one of my favorite favorite places. I wrote up a reflection at the end of the day. Might as well share it with some photos. I love going on hikes like this, always wonder why I don’t do it more often. But it takes so much energy to get everyone out of the house…. 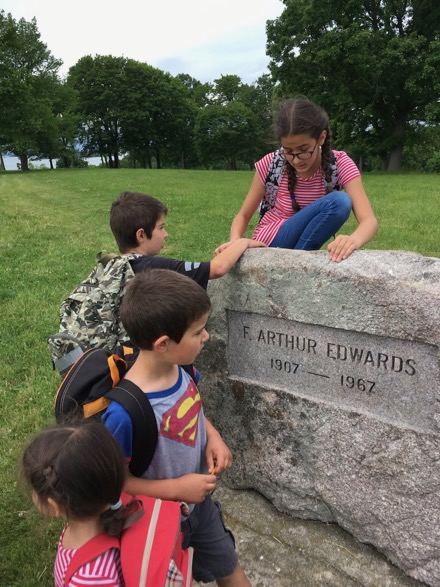 A perfect day, mid sixties, not hot, not cold. Mostly cloudy. Occasionally a few little sprinkles of water, just enough that you’re not quite sure if you felt it or not, but you probably did. Some lovely patches of warm sun just when you most wanted them. Far off over Boston the clouds were low and a brooding blue, looking like someone, somewhere was getting some rain. Occasionally the breezes would blow a waft of brackish salt water smell, but the predominant smell was mown grass and a sweet floral smell I couldn’t quite place (maybe the tulip trees?), and of course the wild roses. 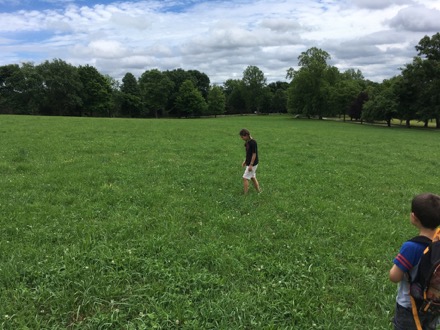 As we crossed the bridge over the tidal marsh we saw cormorants flying over the harbor. All along the trails we saw robins, dozens of them, hopping in the grassy margins, fluttering off into the trees, signing their cheerful cheerios high in the treetops. We passed under maples and oaks, tulip trees and hickory, pines and cedars and a few I wasn’t quite sure of. One conical cedar reminded me so much of a Van Gogh painting. Red wing blackbirds skirmished in the fields and swallows swooped. I saw one swallow entering and leaving a nesting box several times. I think I saw a northern flicker dashing from tree to tree, but it was too far away for me to get a positive id. We spotted a bright oriole, a shocking golden orange color with black markings. Dancing and bobbing in the grass. 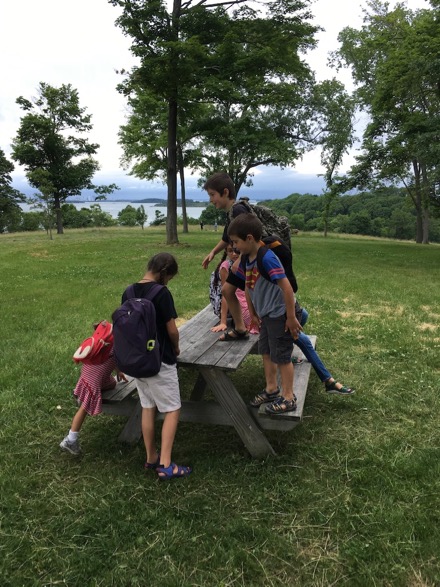 When we crested the big hill we found a patch of bright reddish-orange flowers that looked a little like dandelions. Sophie picked a bouquet of wildflowers, purple and white clover, buttercups, the orange-red flowers, and some white ones I didn’t recognize. She clutched it in her fist all the day. She was in a wild strange mood, wanting to be alone, chasing butterflies and moths across the field when we stopped to eat, deliberately lagging behind as we walked and running away or grunting when we turned back and came too near. A few times she sat herself down in the path or along the side and wouldn’t budge, but she seemed content somehow, too. Lost in fancy or daydream, a desire for a lonesome wildness. She was mad, though when we saw a couple deer in the woods— Bella spotted them— and Sophie was too far behind and they were gone by the time she caught up. When we crossed the Bar, the small spit of land that connects the furthest part of the little peninsula, the kids threw stones into the water, picked up shells, watched a quartet of geese with goslings, spotted some herons in flight. Anthony found a large horseshoe crab shell and carried it around for the second half of our hike. 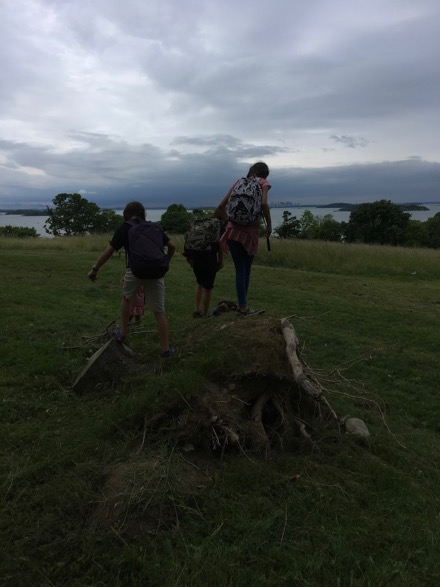 We walked across sunny hills with tall grass on either side, the rustling almost like the waves of the sea, which made no waves at all against the shore, so protected is the spot in the calm harbor. We walked under a tree tunnel in the deep valley between two drumlins, the banks thickly grown with wild roses, mostly white, occasionally pale pink, wafting a delicate smell as we trudge past. A chipmunk darted across the path and scampered along the ditch for a while and eventually dove into a hole. 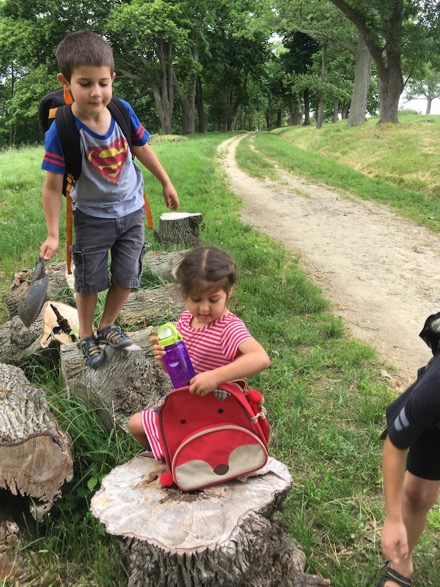 Sometimes I walked hand in hand with Lucy, occasionally with Sophie, when she wanted comfort and not isolation. Their hands were a bit cold with the coolness of the day. The boys ranged all over, mostly with sticks in hand. Bella was here, there, and everywhere, identifying birds and bugs and plants. 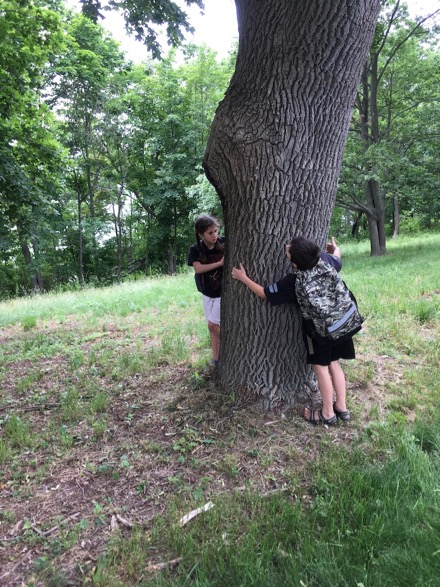 We found a huge puddingstone boulder and the children swarmed all over it. The climbed over stumps and a few times tried to climb a tree. 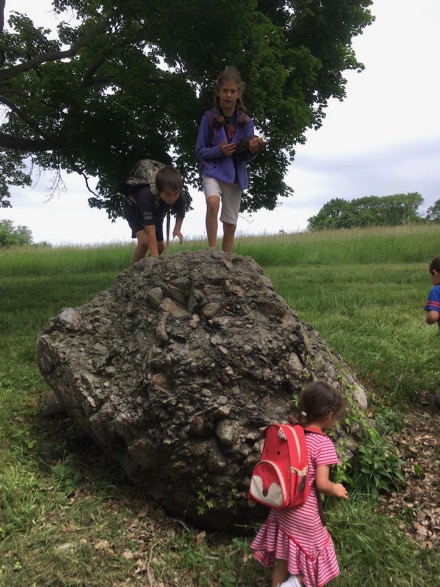 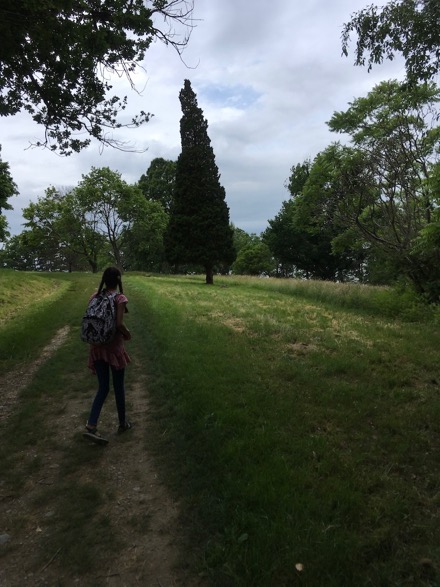 We saw a few families with children, a handful of couples, a trio of retirees from Virginia. But mostly it felt like we had the place to ourselves. 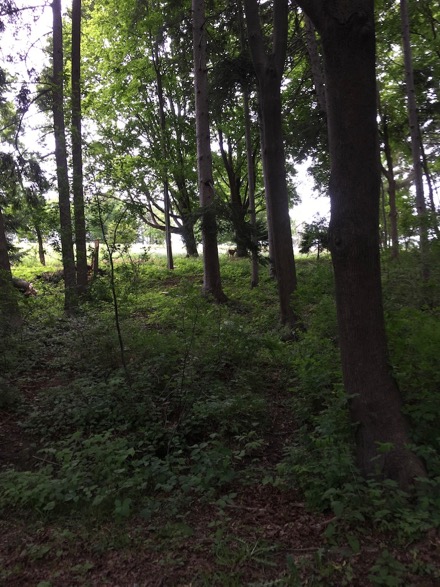 World’s End is one of those magic places you find that somehow resonate in the deepest part of you, the ones that C. S. Lewis said speak of fairyland, or heaven. To me it’s something like Yeats’ Innisfree. A peaceful corner of paradise. We’ve only gone a handful of times and yet it has a disproportionate place in my heart. Today I was thrilled to go further, to finally cross the neck to that distant hilly almost-island. I want to go back again and do the furthest loop. But today we went further than we’ve ever gone, almost three miles. The children are old enough to do a little more, to let themselves be pushed, even if they complain a little too. But despite the complaints of weary feet and sore legs, I know they loved it as much as I did. A day like today is worth many books, so I count it as no loss at all that we didn’t get in our chapters. Today nature was our book and our poem and we drank deep from that nourishing volume. 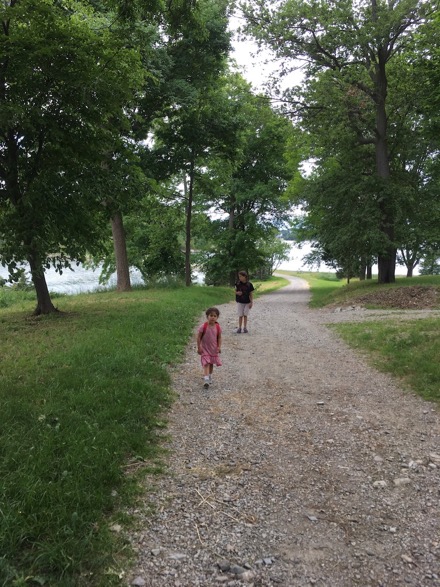 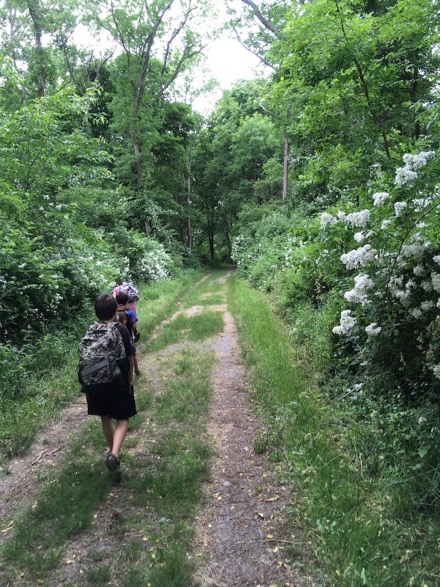 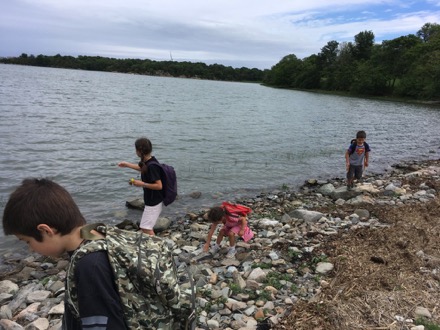 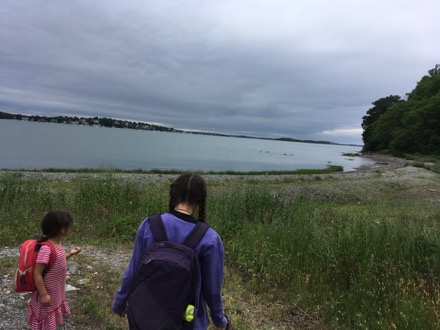 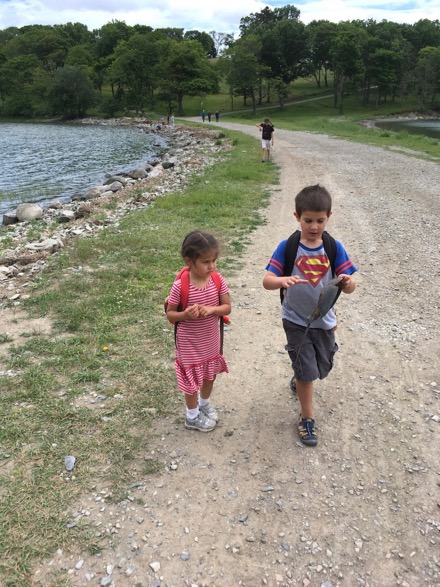 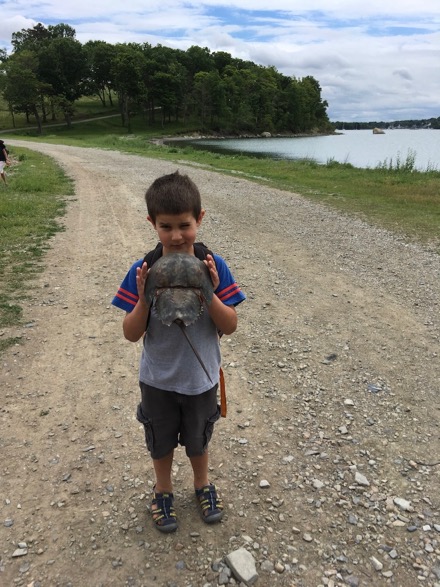 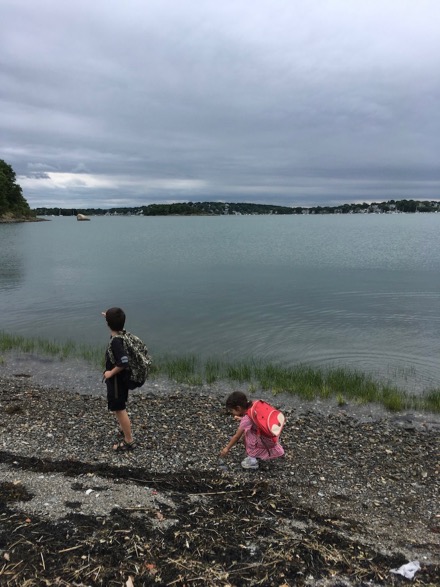 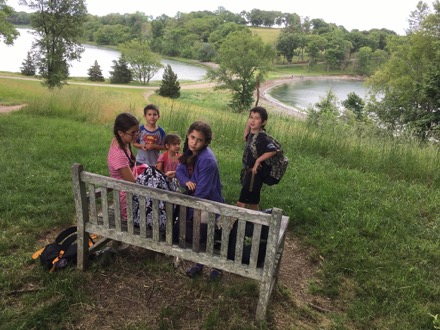 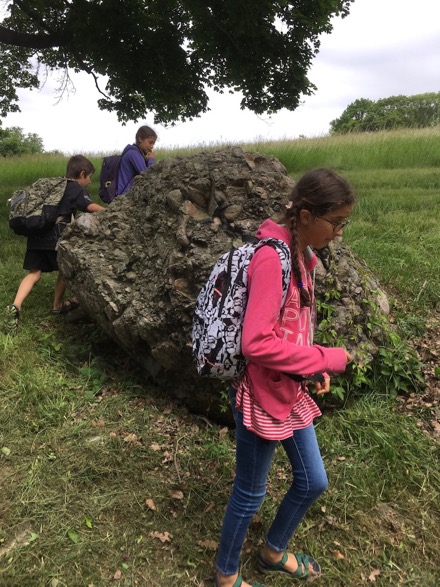 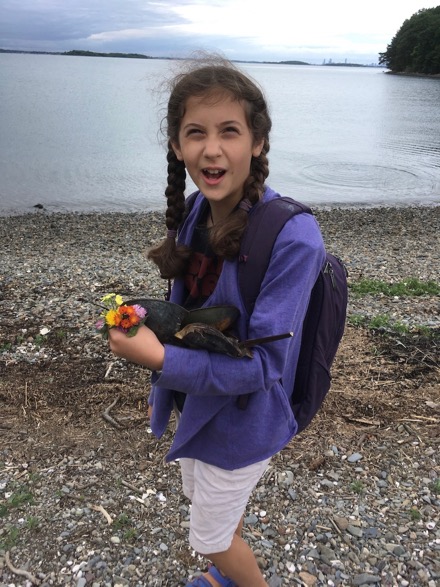 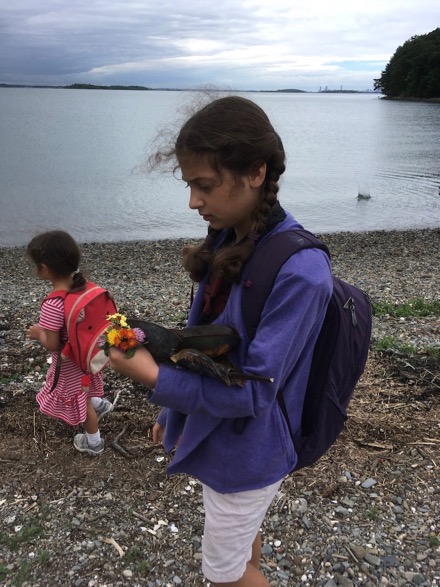