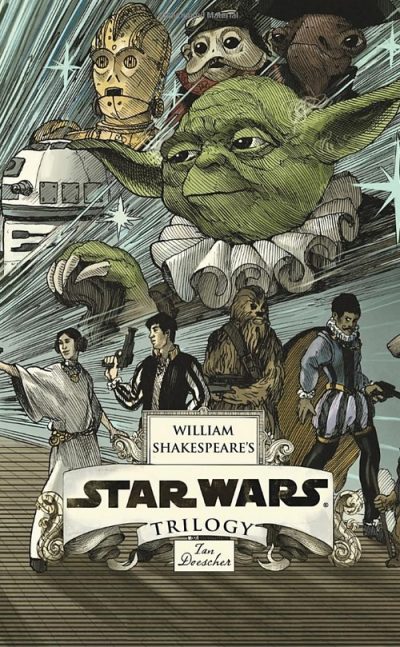 We got this box set last year, but I never remembered to write a review (so many books, so little time!): William Shakespeare’s Star Wars Trilogy: The Royal Imperial Boxed Set: Verily, A New Hope; The Empire Striketh Back; The Jedi Doth Return.

When I first saw mention of this series, I wasn’t sure what to think. Probably gimicky re-writing of Star Wars in fake Elizabethan English… bah. But then several people whose taste I trust told me they were really good. So I took the plunge and ordered the first three, the original trilogy, for Ben’s birthday. I was blown away at what a hit they were. The kids adored them. And I think they’re excellent quality, really quite good Shakespearian pastiche.

It’s not just that Ian Doescher rewrites Star Wars in Elizabethan English, it’s that he so aptly lifts whole lines and speeches straight from Shakespeare, highlighting parallel moments but also sometimes adding depth to the characterizations of Star Wars, as glosses on the movies they are quite brilliant.

The first scene of Verily a New Hope opens with C3PO echoing and reversing Glouster’s famous speech in Richard III:

Now is the summer of our happiness
Made winter by this sudden, fierce attack!
Our ship is under siege, I know not how.
O hast thou heard? The main reactor fails!

Or, later Luke, spying the projected image of Leia echoes the famous balcony scene in Romeo and Juliet:

LUKE —But O, what now? What light through yonder flashing sensor breaks?”

The first is funny and clever and of course picks up on one of the most misquoted lines in Shakespeare. It doesn’t add that much to C3P0’s character, though. And the Romeo and Juliet line is quite apt to capture Luke’s infatuation with Leia. But consider how Luke, echoing Hamlet’s graveyard speech, becomes much more philosophical than the movie ever allows him to be:

“[Luke, holding stormtrooper helmet.] Alas, poor stormtrooper, I knew ye not,
yet have I taken both uniform and life
From thee. What manner of a man wert thou?
A man of inf’nite jest or cruelty?
A man with helpmate and with children too?
A man who hath his Empire serv’d with pride?
A man, perhaps, who wish’d for perfect peace?
What’er thou wert, goodman, thy pardon grant
Unto the one who took thy place: e’en me.” 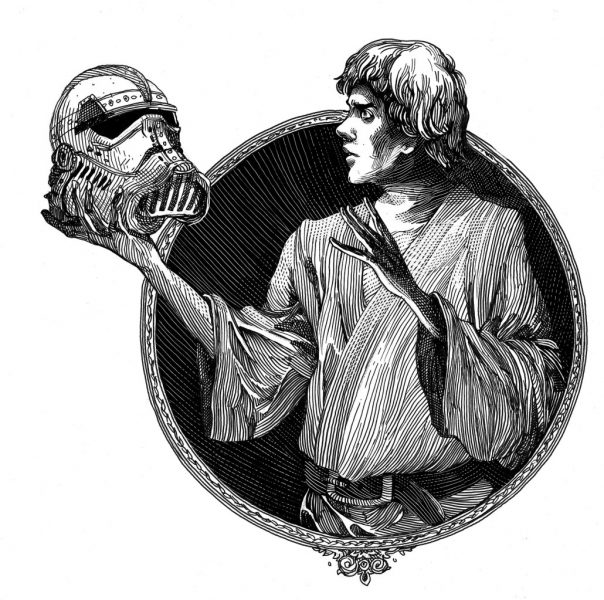 I think the soliloquies especially add something to the character of R2D2 for example, his bleeps and blaps which the audience can’t understand make him rather unscrutable, but in Doescher’s plays he becomes a Hamlet figure, shrewdly playing the fool, part Hamlet, part Malviolio:

“This golden droid has been a friend, ’tis true,
And yet I wish to still his prating tongue!
An imp, he calleth me? I’ll be reveng’d,
And merry pranks aplenty I shall play
Upon this pompous droid C-3PO!
Yet not in language shall my pranks be done:
Around both humans and droids I must
Be seen to make such errant beeps and squeaks
That they shall think me simple. Truly, though,
Although with sounds obilque I speak to them,
I clearly see how I shall play my part,
And how a vast rebellion shall succeed
By wit and wisdom of a simple droid.”

“A plague on 3PO for action slow,
A plague upon my quest that led us here,
A plague on both our circuit boards, I say!

And I love it when Darth Vader is given a parody of Shylock’s “Hath not a Jew eyes?” speech in The Empire Striketh Back:

“Hath not a Sith eyes?
Hath not a Sith such feelings, heart and soul,
As any Jedi Knight did e’er possess?
If you prick us, do we not bleed?
If you Blast us, shall we not injur’d be?
If you Assault with lightsaber, do we not die?”

Oh and I really like the way treatment of the Han and Greedo scene:

[They shoot, Greedo dies.] [To innkeeper:] Pray, goodly Sir, forgive me for the mess. [Aside:] And whether I shot first, I’ll ne’er confess!

I love that Han is given a Shakespearian aside. And that Doescher playfully picks up on the “Han shot first” controversy, created when Lucas revised the scene in the extended edition to show Han shooting first instead of Greedo. Diehard fans decried the revision, saying that it fundamentally changed Han’s character. 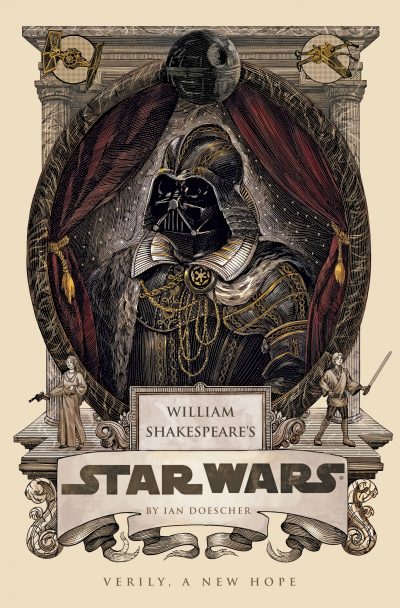 For anyone as familiar with Shakespeare as I am and as I hope my kids will be, there are all sort of really fun scenes and lines and it’s delightful to see them catching on to some of them.Verily a New Hope

I read the first one aloud to the kids, one scene at a time, as a bedtime story. And they clamored for it. But then we got distracted and never finished The Empire Striketh Back. But I think the three independent readers have all read them at least once. And Bella and Sophie have done some dramatic readings.

The books are nice hardcovers and the woodblock illustrations are a perfect touch. The kids love their favorite Star Wars characters decked out in Shakespearian ruffs. I really do think these are a must-have for every cultured die-hard Star Wars fan.

You can get the box set, as we did, the books are also available as individual volumes:

The Empire Striketh Back

Also, though I have not yet looked at the other books in the series, they are available. Some day I’d like to own the whole collection:

The Phantom of Menace

The Tragedy of the Sith’s Revenge