I ran an errand with Lucy, getting Thanksgiving turkey and other stuff, while the others stayed home and Dom supervised their school work.

Anthony did math, copywork, and reading and worked on his cub scout badge material.

Ben did math, Explode the Code, copywork, and read a Bob book and worked on his cub scout badge material.

Sophie couldn’t find her math book and so did no school.

Bella did some Khan Academy math.

Afternoon stories: Pegeen King of Ireland’s Son, Catholic Tales, and a library book about pill bugs, part of our study of decomposition.

Bella is re-reading Lord of the Rings.

Took Bella to the orthodontist and then ran errands. Other kids stayed home and did work with Dom.   Anthony did math, copywork, and reading (read from Saint of the day).

Ben did math, Explode the Code, copywork, and read a Bob book, I think.

Sophie still hasn’t found the math book, but did copywork and prepared a dictation passage and read to Dom. She narrated her reading to me when I got home.

Bella… I think she didn’t do any school at all.

While I made dinner the boys were dressed in costumes and drawing on the map in the hall, plotting to take over the world. Ben made himself a helmet out of an Amazon box. He was an Imperial Spook Trooper. Like a Storm Trooper but scarier, I guess. With a Jack o’lantern and a ghost drawn on the box. Anthony was wearing a WW2 helmet but said he was Japanese. And was colluding in the plans for world conquest.

Meanwhile the girls were in their room and Bella and Sophie were doing a dramatic reading of The Empire Striketh Back, the second in the Shakespeare’s Star Wars trilogy. They’d divided up the roles and were having a grand time.   Eventually the boys joined the girls and became an enthralled audience. Delightfully this kept everyone from trashing the house. Easy cleanup at bedtime.

Spent the day baking, prepping for Thanksgiving. No school, except Bella did a little math on Khan Academy and Sophie did copywork and dictation to make up for the missed day on Monday. Bella hunted up the kimonos I got from a local homeschooler last year and the kids had fun dressing up all day, swapping kimonos and playing at being samurai warriors. 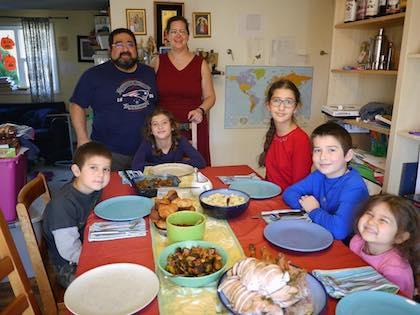 Recovery from Thanksgiving holiday. No school.

We’ve continued to read library books at bedtime, working our way through a pile of science books about rocks and geology on the one hand and decomposition and soil on the other. The selection inspired by our most recent field trips.