One of the priests from our parish is from Haiti. I love his homilies on the Sundays that he says Mass, about once a month. I also love his weekly French-language column in the bulletin. I like to read it to practice my French, but I also find that sometimes I glean real spiritual treasures as well. This week’s column is an excerpt from the Catechism. It’s a passage about Mary and the Holy spirit. There’s something about reading it in French that made me see it differently, maybe just because I’m not fully fluent. As I read I found myself pondering every word and phrase. And one phrase really grabbed me: “Mother of the total Christ”. 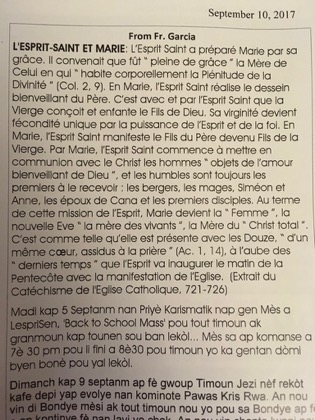 I found the corresponding passage in the English translation of the Catechism of the Catholic Church:

722 The Holy Spirit prepared Mary by his grace. It was fitting that the mother of him in whom “the whole fullness of deity dwells bodily”102 should herself be “full of grace.” She was, by sheer grace, conceived without sin as the most humble of creatures, the most capable of welcoming the inexpressible gift of the Almighty. It was quite correct for the angel Gabriel to greet her as the “Daughter of Zion”: “Rejoice.”103 It is the thanksgiving of the whole People of God, and thus of the Church, which Mary in her canticle104 lifts up to the Father in the Holy Spirit while carrying within her the eternal Son.

723 In Mary, the Holy Spirit fulfills the plan of the Father’s loving goodness. Through the Holy Spirit, the Virgin conceives and gives birth to the Son of God. By the Holy Spirit’s power and her faith, her virginity became uniquely fruitful.105

725 Finally, through Mary, the Holy Spirit begins to bring men, the objects of God’s merciful love,107 into communion with Christ. And the humble are always the first to accept him: shepherds, magi, Simeon and Anna, the bride and groom at Cana, and the first disciples.

726 At the end of this mission of the Spirit, Mary became the Woman, the new Eve (“mother of the living”), the mother of the “whole Christ.”108 As such, she was present with the Twelve, who “with one accord devoted themselves to prayer,”109 at the dawn of the “end time” which the Spirit was to inaugurate on the morning of Pentecost with the manifestation of the Church.