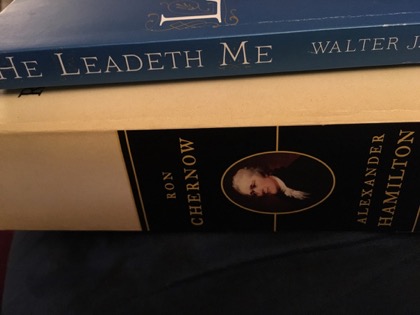 1. The Professor and the Madman by Simon Winchester

Since I enjoyed Winchester’s The Map that Changed the World, I decided to finally give this book a try. I first heard about it years ago and it’s taken a long time for me to decide to actually get a copy and read it. I mean you’d think it’s right up my alley since I’ve been in love with the OED from the day I first was introduced to it in my second year of grad school.

2. With God in Russia by Walter Ciszek, SJ

After he was exchanged for a Russian prisoner and repatriated to the United States in 1963, Fr Ciszek wrote this account of the twenty years he’d spent in Russia, most of it in prison and in labor camps. I really can’t find words to describe how awesome his story is. His profound trust in God and insights on discernment of God’s will are really amazing. I’m still groping for words and trying to organize my thoughts. I’m re-reading He Leadeth Me now and that will lead me even deeper. But I’m really glad to come at it this time with the context of With God in Russia.

3. The Confessions of X by Suzanne Wolfe

An interesting novel about St Augustine’s concubine, the mother of his son, Adeodatus, who is mentioned, but never by name, in his Confessions. Told in the first person, mostly in flashbacks as she is at the beginning an old woman.

The sequel to Pat of Silver Bush.

In this pair of novels Montgomery’s fascination with houses as personalities comes to the fore. Pat is obsessed with Silver Bush to the point that she rejects all suitors because marriage will take her away from her beloved home. By the end of the novel I was thinking, “What we chiefly need is a good house fire to obliterate this idol of a house which is ruining her life.”

The great character in these books is Judy Plum, the Irish serving woman who is much more of a mother to Pat than the shadowy, sickly Mother who hardly utters a word throughout. Like Emily of New Moon, Pat has a rather disastrous flirtation with an older man. Unlike Anne and Emily, Pat isn’t much of a writer or dreamer. She’s a rather prosy homebody and that is actually a quality which makes her endearing to me, up to the point where she’s choosing house over marriage and family.

5. Word to Caesar by Gary Trease

Juvenile novel set in ancient Rome in the days of Trajan and Hadrian. It begins in Roman Britain, Paul, the son of a legionary who is posted at a border fort, witnesses the fort overrun by native tribes. He’s wounded in the action. His father dead, Paul carries the news of the fall of the fort to a neighboring garrison, only to see it overrun as well. He escapes, rescued by Roman citizen in a toga, a poet who has been exiled from Rome. When the news comes that Trajan is dead and Hadrian is now emperor, Paul takes it upon himself to take a message to the emperor begging for a pardon for his poet friend. He travels to Rome where he has to solve a mystery along with the poet’s daughter, Tonia.

I’m going to try to pass this one on to Bella. I think she’ll like it.

1. He Leadeth Me by Fr Walter Ciszek

I sped through With God in Russia in two or three days. This one is much shorter, but I’m slowing down to savor it. It’s meatier, less of a story and more of a meditation. The first is what happened, the second is more about the how and why, the interior vs the exterior. Which isn’t to say that With God in Russia neglects the spiritual at all. And I wouldn’t at all say that it feels like a first draft. But I think the one book needed to be written first to clear the way for the other. It’s almost like Tom Sawyer and Huck Finn, both really good in their own way, but Huck Finn is definitely richer, deeper, meatier and yet that’s an imperfect analogy because With God in Russia is about as far from Tom Sawyer’s frolics as you can get.

I’ve been meaning to dive into this for ages, but I got sucked into John Adams first. And in a way I’m glad. I feel more ready to dive into the Revolutionary Period and less like I’m diving into the background material for the musical. Adams and Hamilton did not like each other much and it’s rather refreshing to read them back to back. Such very different men and yet both of them visionaries and authors of the Revolution.

I picked this one up at the lake house this summer and read the first few pages and wanted to continue. It’s slower going, but by no means a dry book. I’ve just got a lot of great books pulling me in different directions and this one keeps getting bumped. But one of the fun things is the focus so far is all Boston so it feels like local history. The Revolution certainly captures the imagination more here in the place where it happened than it did in my long-ago Texas girlhood.

Still dipping into the waters occasionally. This is mostly a doctor’s office book. Or a Saturday afternoon book. I want quiet and a chance to dive deep. It doesn’t fit into the pace of our school days very well because it hates being interrupted. And when I finish I shall have to go back and read it again.

5. God in Search of Man: A Philosophy of Judaism by Abraham Joshua Heschel

Another Saturday afternoon book. A book to dip into and taste in small sips. But deliciously bracing and sometimes somewhat intoxicating.

Well since the movie came out I’ve been meaning to re-read it. I want to argue with people about the book and the movie, but the book isn’t fresh enough in my mind and I haven’t seen the movie. Of course by the time I’m done no one will be interested in arguing anymore.

A sort of historcial fiction set in Victorian London– Pratchett calls it historical fantasy, I think to distinguish that this novel plays fast and loose with certain facts. But there are no elements of the magical or fantastical. The title character is a “tosher” one who goes into the sewers to collect the treasures that wash down the drains, coins and jewelry mostly. He gets caught up in an adventure when he rescues a young woman who is being beaten on the street. The mystery of who she is is the heart of the novel but so is Dodger’s gradual transformation as he learns that there’s not so much difference between politics and drain diving. An unusual coming of age story with Charles Dickens as a sort of guide. And don’t forget Sweeney Todd.

8. A Short History of Nearly Everything by Bill Bryson

Thinking about this as a possible science selection. I’m not sold as yet, but I’m going to give it a few more pages. I like Bryson’s style, chatty and informal. I’m not sure I’m going to read the whole book, but I’ll give it a shot.