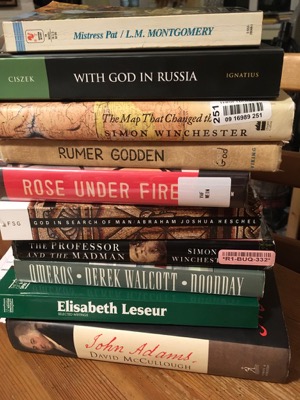 1. Rose Under Fire by Elizabeth Wein

A “companion novel” to Code Name Verity. I’d have just said sequel. Although the novel has a different protagonist who wasn’t in the first novel, there are several characters who appear in both. Maddie, one of the main characters in CNV makes a significant appearance early in the novel. (It’s quite satisfying as a sequel in that sense; we get a little peak into what happens to Maddie after the end of CNV.)

Like CNV Rose Under Fire is an epistolary novel; here, told mainly in the form of Rose’s journal. But the plotting is much more straightforward. Where CNV was a spy novel and had an unreliable narrator, RUF is a prisoner of war novel and while memory is a major theme, with one of the concerns being the unreliability of memory, still Rose is a fairly straightforward narrator and her motivation is simply to tell the world about what happened in Ravensbrük.

Both novels have heroic female protagonists who are pilots. Both are stories of friendship and courage in impossibly horrific situations. And both have narrators with distinctive voices and strong secondary characters.

One of the things that makes Rose so distinctive as a narrator is that she is a poet. Her narrative is sprinkled with poetry and songs, many of her own composition and many by others as well. She’s a huge fan of Edna St Vincent Millay. Rose and her companions cling to poetry and song and story to help them stay sane in the horror of the camps. For the reader, Rose’s poetry adds another dimension to her narrative. The way beauty and terror mingle in her verse, the juxtaposition of the ugly and the sublime, are startling and sometimes even jarring. It is quite an effective device.

I loved both novels and I’d be hard pressed choose a favorite.

2. Men at Arms by Terry Pratchett

The sequel to Guards Guards, and the second in the Watch series, a subseries of Pratchett’s Discworld novels. Captain Vimes is getting married to an aristocratic and must give up his place in the watch meanwhile there have been a series of murders that must be solved. And yet the Patrician has ordered Vimes not to investigate. As with all the Discowrld novels, Pratchett’s lighthearted police procedural flirts with some serious ideas: racism, affirmative action hiring, aristocracy and class, and hereditary monarchy. And yet the novels never take themselves too seriously. It’s a fun romp with a satisfactory ending.

A historical novel about a young French girl who takes command of a Canadian fort when her parents are away and holds off an Indian attack with a mere handful of boys and men. Madeleine is brave and gutsy, a delightful role model. She commands her younger brothers but also men much older than she. She’s the daughter of the seigneur and they are the habitants, or settlers, and servants.

I like the sprinkling of French words and French culture and the matter of fact details of Madeleine’s living faith. She prays to God for help, visits the chapel, gives thanks to God for rescue.

4. The Map That Changed the World by Simon Winchester.

The story of William Smith, the pioneering English geologist who made the first geological survey map of England and who was the first to realize that geological strata were regular and could be dated by fossils. Smith is a fascinating character who went through hard times, was under-appreciated by his colleagues because of his lower class origins, was plagiarized, and spent time in debtors prison. But he did achieve some recognition and financial stability at the end of his life. Winchester’s account is entertaining, engaging, and informative. This would make a good supplemental science reading for an older child interested in geology.

I realized, too, that I still need to read Winchester’s book about the OED, the Professor and the Madman.

A short novel (novella?) set in Iron Age Britain, telling the story of the creation of the White Horse of Uffington. It feels in continuity with Sutcliff’s Bronze Age novel, Warrior Scarlett, and her Roman novels, especially with Mark of the Horse Lord and Eagle of the Ninth.

The protagonist is the youngest son of an Icenii tribal chieftain. He has an innate gift for drawing, especially for drawing animals in motion. He is left behind to guard the dun while the warriors ride off to battle when a neighboring tribe attacks unexpectedly. His people are defeated in battle and he and the remnant are captured and held prisoner in their own dun and made to work as slaves for the new residents. He bargains for their freedom with his artistic gift: he will make a horse for the captors, who in turn will not only let his people go, but will provide them with horses and cattle to begin a new life in the north. Meanwhile the protagonist knows that the pattern of the story demands he sacrifice his life for the good of the tribe. (Very much like the protagonist in Mark of the Horse Lord.)   Interesting to see how Sutcliff develops certain themes over the course of several books. Her historical novels span millennia and yet they feel like they’re definitely set in the same milieu. The sense of place is so strong and the sense of history stretching forward and backward.

6. Home Is the Sailor by Rumer Godden

Another of Godden’s doll books like The Doll’s House, the Story of Holly and Ivy, Miss Happiness and Miss Flower, etc. As in Godden’s other doll books the dolls are the main characters in their own right. Godden’s dolls manage to be people with distinct personalities and at the same time they never relinquish their dollishness. They can only move when they are acted upon by a person, usually a child, or an animal, or a natural force. They can only talk to each other and can only communicate with their children by wishing.

Home Is the Sailor is the story of a household of dolls in Wales that belong to a little girl named Sian and who used to belong to her older sister Debbie. The doll family lives under a cloud because the father was lost in a sand dune on a picnic and the oldest son, Thomas, was lost when Mother gave him away to a visiting French girl. The younger boy doll, Curley Walter Raleigh, is determined to go to France and find Thomas to bring him home to his finacee Miss Charlotte. He falls out of a window and is picked up by a French boy. Bertrand.   Bertrand is that familiar Godden character, the child who no one wants to be around because he really is an unpleasant person. He reminds me very much of Eustace in the Voyage of the Dawn Treader before he becomes a dragon. Bertrand is conceited and proud. He is good at everything and wants everyone to know it. H has been sent to England to live with an aunt and uncle because his parents have despaired of him. His uncle sent Bertrand to Wales to the Sea School where he sends young employees from his factory every year, hoping that a little humiliation will be good for him. Bertrand does find humiliation aplenty as the youngest and smallest and least competent boy at the Sea School. But after he rescues Curley his luck changes, he learns humility and compassion and makes some friends. Ultimately the dolls are all reunited and Bertrand and Sian become friends.   Godden’s doll books explore similar themes: the helplessness of children, at the mercy of adults who often don’t understand, the arbitrariness of life, the power of wishing/prayer.

At long last (six months) I’ve come to the end of this delightful tome. Really, I almost wish it had been longer, but it is very satisfying to come to journey’s end, to read the last words, to move the book up from the In Progress section to Finished.

I feel I know John Adams and his wife and his world so much better now. And at the same time, I feel like there’s so much more I’d like to know. It’s been in interesting journey. I’m still really fascinated by the Revolutionary period and want to read about Washington and Jefferson and Hamilton and others. I also find myself wanting to go back to the Adams houses in Quincy. Take the tours again knowing John so much better this time around.

As to the book itself, it’s hard to know what to say. I feel if I begin to summarize or to dwell on favorite details I might never be able to stop.

1. The Professor and the Madman by Simon Winchester

Since I enjoyed Winchester’s The Map that Changed the World, I decided to finally give this book a try. I first heard about it years ago and it’s taken a long time for me to decide to actually get a copy and read it. I mean you’d think it’s right up my alley since I’ve been in love with the OED from the day I first was introduced to it in my second year of grad school.

I’ve heard much about Elisabeth Leseur from various friends, notably Mrs Darwin and Erin of Bearing Blog. I thought she would be a good fit. And yet I’m finding this book really tough going. It’s just not grabbing me. Well, I’ll make my way slow and steady anyway. Maybe it will click. And if not, I’m sure it will still have something to say.

4. God in Search of Man: A Philosophy of Judaism by Abraham Joshua Heschel

A beautiful little book. I don’t really read much philosophy— probably none since I was an undergrad. But this book is quite engaging.

Still making bits of progress. Some passages I can’t make much of, but others floor me with their beauty and demand to be read over and over again. I just read a chapter, can’t remember the number now, in which Walcott goes to Ireland. He grapples with Seamus Heaney (not by name, but his fingerprints are all over the section) and with James Joyce. It’s really lovely.

6. With God in Russia by Walter Ciszek, SJ

I’ve had this book on the shelf for years now, but never cracked the cover. I loved He Leadeth Me and fully intended to read this one eventually, but never felt strongly motivated to read a second book about the same experience, not when there were other books and other books.

But a funny thing happened this week. A friend posted a question on Facebook, asking for favorite saint quotes. And every time the post popped up on my screen, I not only couldn’t think about saint quotes, but I also kept seeing myself taking this book off the shelf. Five or six times over a two or three day period, I had the same vivid visualization which had no apparent rationale at all. I simply cannot see the link between the question and the prompt to take the book down to read it. Finally I gave in and grabbed the book and began to read. And read and read. More than halfway through, 250 pages in two days.

7. The Confessions of X by Suzanne Wolfe

Darwin Catholic recommended it, so I got it on hold from the library. A historical novel told from the point of view of the woman who loved St Augustine. I’m only a couple chapters in, still not sure if I’m going to like it, but willing to give it a bit more of a chance.