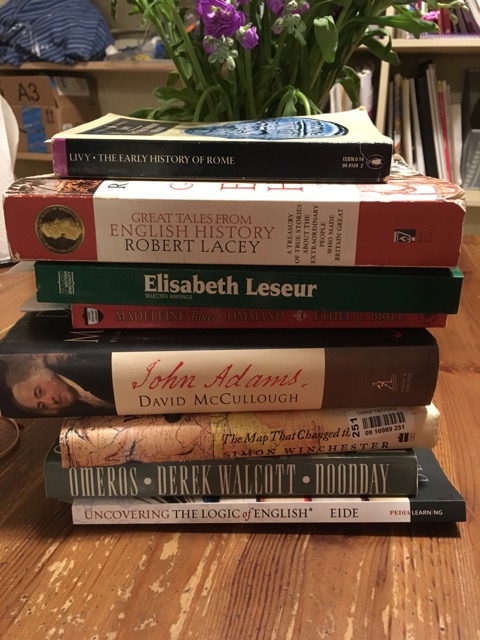 When I see that I only finished one book in May, I feel a bit disappointed. But it certainly was not for lack of time spent reading. Nor have I failed to make significant progress in any of my books. I’m actually quite pleased with how much I’ve read of John Adams, and with how consistently I’m reading most of my books. But this slow reading of many books instead of quickly devouring one book after another is certainly more satisfying overall. But it’s so different a pattern, that it feels hard to judge progress. Maybe I should get a calendar and record what books I read each day. That might make me feel the weight of progress. Or maybe throw in more of the books I can finish quickly just to make me feel like I’m doing more.

These lists don’t include the piles of books I read every day with the kids. And yet in terms of my own intellectual life there is often real meat there. And I certainly find the stories we read do help fill my need for story, making me feel much less need for gulping novels whole.

I watched the Lark Rise to Candleford tv series on Amazon and was curious about the book. I was more than a little surprised at the format. It’s not really a story so much as a set of vignettes with recurring characters. The characters of Laura and here family and some of the supporting cast are there but only very roughly. Mostly the book is full of description of the place and the lifestyle with a few sketchy episodes that sort of outline the beginnings of a story. I see why the miniseries made sweeping changes. This might be another case where I encountered the film version first and ultimately prefer it to the original book.

Evidently the copy I have is highly abridged, so maybe there was more meat to the original book; but the editor’s note suggests not likely.

I’m not disappointed per se. For what it is I liked the book quite well. But it does not fill in more details about Laura and Miss Lane and all the other characters. In fact, there is much less not more.

Now I kind of want to go back and rewatch the series.

Still going with John Adams. Reading a few pages every day and savoring it. I really like John Adams and this is making me want to really sink my teeth into even more Revolutionary War era books. Up next will be Chernow’s Hamilton. Then maybe his George Washington and perhaps a book on Jefferson. Dom is trying to get me to read Washington’s Spies and a few historical novels as well.

I’m still making slow progress on this epic poem: a chapter or two a week. I don’t want to rush it. Walcott’s verse is dense and lush and the poem’s shifts between characters and from the past to the present, the mythical to the prosaic, require an alert reader. I have to stop and re-read some chapters several times to unravel the action as it moves back and forth in time. Especially in Book Three where Achille seems to voyage back in time to an Africa of the past. The poem feels very post-modern, it’s hard to tell exactly what is going on. Is it a dream? A vision? A poetic fancy? Or a sort of magical realism? I’m not sure, but I really do love it.

I wasn’t going to start any new novels in Lent, but this one called to me at a weak moment and I found myself pulled in. I’m only allowing myself to read a section a day. Pat is one of the Montgomery novels I’d only read once before and it didn’t make much of an impression; but a friend has been talking about it fondly and I wanted to go back to see what I’d missed. Pat isn’t as charming as Anne or Emily, but she does have her moments and I’m liking Judy Plum quite a bit.

4. The Early History of Rome by Livy (Titus Livius)
I took a Roman Historians class for my very first Latin class my freshman year at UD and we translated Livy. It was tough. Of course we didn’t make it all the way through and now I’m wanting to grapple more with ancient history. I’m not quite ready to go try translating at this point, so I’m going to do what I failed to do either that semester or the other time Livy was assigned in my Western Civ class and I’m going to finally read this book. And then maybe some more ancient historians. What else should I read? i’m thinking maybe Herodotus and Thucydides, both authors I sadly neglected. I’m really not well read in ancient historians. Any preferred translations?
5. Elisabeth Leseur Selected Writings edited and translated by Janet K. Ruffing, RSM

This has been on my shelf for a long time and on my wishlist long before that. Time to dust it off and dig in. In May I only made it through the introductory material, not into the writings themselves.

I don’t know how I found this book, but it’s delightful. In his introduction Lacey remembers reading H. E. Marshall’s Our Island Story as a child. He remembers both the stirring stories and a glaring error by an author who had never seen some of the places she wrote about. This volume is an Our Island Story for grown ups. Lacey cites his sources and tries to tease out history from myth, while still valuing the myths and legends for what they do tell us about people in the past and about who we are now. Lacey’s voice is distinctive and witty and quite captivating. So far I’m really enjoying my dips into these great tales.

A juvenile novel about a young French Canadian girl who is left to hold down the fort while her parents are away and who organizes the men and boys to stave off an Indian attack. One of Bella’s favorites, so I decided to see what I’d missed.

8. The Map That Changed the World by Simon Winchester.

The story of English geologist William Smith who made the first geological survey of England. A friend recommended this one and I’m enjoying it so far.