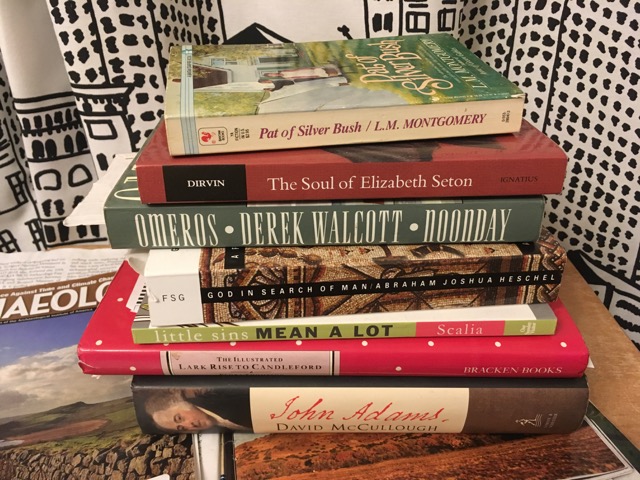 My little monthly summary of what I’ve been reading to keep myself accountable for what I’m reading, to bolster my fuzzy memory, and to share book lists with my book-loving friends.

1. The Discoverers: A History of Man’s Search to Know His World and Himself by Daniel Boorstin

Finally finished! I began The Discoverers in December of 2015, so it’s taken me a little over a year to read. It’s been start and stop, but I’ve generally been plugging away a little bit at a time. I got bogged down a bit in the middle and put it aside for a month or two (as best I recall). It’s a really good book. I had some quibbles with Boorstin’s handling of religion in some of the first section of the book, I found some of the bits about biology dragged, but I loved the narrative, the scope, and the storytelling. I’ll definitely consider putting it on a high school reading list for Bella.

2. The Soul of Elizabeth Seton by Joseph I. Dirvin

Finally finished this one too. It’s lovely to come to the end of a book that you’ve been reading for a long time. Especially one you’ve abandoned and then picked up again. Confirmation that I can in fact follow through and complete a difficult task.

I expected that Elizabeth Seton was going to be most interesting when it came to education. After all, that’s what she’s most known for. And I’m always interested in educational theories and practices. But this was not that book. This really focused on her interior life, mostly as revealed in her letters. Above all what moved me about St Elizabeth was her longing for heaven and her love for Jesus in the Eucharist, both of which dated to her childhood and far predated her entry into the Catholic Church.   This is not a biography and does not present her story in chronological order. It rather presumes the reader already has a biography under his belt. I’m glad I’d read the kids the Encounter the Saints book so that I had a pretty good idea of her life and the principle characters in it. This book really plunges into Elizabeth’s spirituality and while that’s not at all what I expected, I suspect it’s what I needed. I’m glad I stumbled upon this lovely presentation of the saint. Elizabeth Seton was the saint I got through Jennifer Fulwiler’s Saints Name Generator, which I really like as a way to meet new saint friends. I try to pick a new saint every year and to get to know them by reading a biography where one is available.

3. Saint Pius V: A Brief Account of His Life, Times, Virtues and Miracles by Robin Anderson

Another one I’m picking up again after abandoning it. I was hoping to finish by the end of Lent; but instead I finished it on the third Sunday of Easter, which happened to be the feast of St Pius, so maybe the delay wasn’t such a bad thing after all.   It’s not a long book or a challenging one; but neither was it a very lively book or an in-depth study and maybe that made it drag a bit. St Pius was the saint the Saint’s Name Generator picked for me last year and I began reading the book to get to know him a bit better. as I’ve tried to do with all of the saints I’ve picked that way. There’s some interesting history here: his excommunication of Queen Elizabeth, the Catholic League and the Battle of Lepanto, his many reforms.
A memorable moment in the book was this little aside about a miracle that happened during Pius’ lifetime:

The Polish ambassador, speaking with the Pope at the doors of St Peter’s, asked for a relic to take back with him to his country. Pius V stooped, took a little dust from the ground, put this in a piece of clean linen and gave it to the ambassador with the words: These are very precious relics.” Trying not to feel offended, the ambassador had the grace to accept what was offered him. On getting home, he found the linen stained with blood– blood of martyrs that had once watered Roman ground.

What amazing faith Pius had to recognize the very dust of Rome is saturated with the blood of martyrs. It is a holy place. This is why we go on pilgrimage to Rome.

4. Children of Earth and Sky by Guy Gavriel Kay

i began re-reading Kay’s latest novel to see what I missed the first time through when I flew through it. I’m a terrible reader on the first go and I needed to take this one more slowly to gather my thoughts. On the whole I didn’t like it as much as many of his other novels, but I don’t think that’s because it’s a bad book, just that I wasn’t as in love with what he was trying to accomplish. I hope to gather my thoughts into a more coherent blog post in the next week.

I didn’t finish any new books, but I knocked off three that have been in my currently reading pile for more than a year. That feels like a pretty big accomplishment. And I finished the Kay and began writing some thoughts on it so the re-read was definitely as productive as I hoped it would be. And I’ve continued to make steady progress in several more books.

Still going with John Adams. I really love this book; McCullough is a great storyteller. Hardly a day goes by that I don’t pick it up and read at least a few pages; but I’m deliberately reading slowly and thinking about what I’m reading.

I’m still making slow progress on this epic poem: a chapter or two a week. I don’t want to rush it. Walcott’s verse is dense and lush and the poem’s shifts between characters and from the past to the present, the mythical to the prosaic, require an alert reader. I have to stop and re-read some chapters several times to unravel the action as it moves back and forth in time. Especially in Book Three where Achille seems to voyage back in time to an Africa of the past. The poem feels very post-modern, it’s hard to tell exactly what is going on. Is it a dream? A vision? A poetic fancy? Or a sort of magical realism? I’m not sure, but I really do love it.

Diving into Elizabeth Scalia’s newest book. It’s not a difficult read, but it’s challenging in a good way, a short of examination of conscience. I didn’t finish it over Lent and I’m trying to decide if I want to table it till next Lent or maybe Advent or if I want to push on through. Right now it’s very much on the back burner, though. Maybe a little too demanding of self reflection?

4. God in Search of Man: A Philosophy of Judaism by Abraham Joshua Heschel

Picking this one up again. I read a few pages this fall and then it got put aside. I really like Heschel’s philosophical approach and approaching questions about God through a Jewish lens is fascinating. It’s familiar and yet slightly foreign and yet not at all alien. This is going very slowly, maybe a short section every week or two; but philosophy is harder to pick up and stay with.

I wasn’t going to start any new novels in Lent, but this one called to me at a weak moment and I found myself pulled in. I’m only allowing myself a section a day. Pat is one of the Montgomery novels I’d only read once before and it didn’t make much of an impression; but a friend has been talking about it fondly and I wanted to go back to see what I’d missed. Pat isn’t as charming as Anne or Emily, but she does have her moments and I’m liking Judy Plum quite a bit.

I watched the tv series on Amazon and was curious about the book. So far a little surprised at the format. Not really a story so much as a set of vignettes. The characters are there but only very roughly. It’s mostly description of the place and the lifestyle.

1. The Poems of T. S. Eliot: The Annotated Text edited by Christopher Ricks and Jim McCue

I dove into the notes for Ash Wednesday at the beginning of Lent and then haven’t done much since. It’s a big beautiful book, but I needed the pretext to pick it up and once that pretext was gone I set it down and haven’t gone back. I suppose its more of a reference book or a browse at leisure book than one to sit and read. But I really do want to dive into it more.

2. Reed of God by Caryll Houselander

I’ve been reading this one slowly, very slowly, for years. I picked it up in Advent and then put it down again. I read a page or two here and there and then abandon it again. And once again this Lent I held true. I read a few pages and then lost the book. But I know I will finish it some day.