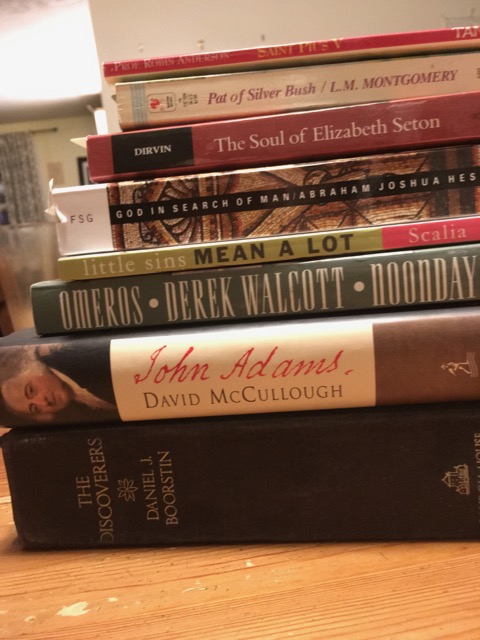 1. The Underrunners by Margaret Mahy

A juvenile novel set in New Zealand. A boy who lives with his father on the edge of the wilderness whose mother has left for Australia. Meets a girl who is living at a local home for children because her mother has been hospitalized. It turns out they knew each other long ago when they were neighbors and her mother watched him. Her mother who is almost a second mother to him, almost more of a mother than his own mother. Then her father shows up wanting her to tell him where her mother is. He kidnaps the children and they have a traumatic experience. There were elements of the story I really liked, but on the whole I’m not a fan of the genre of troubled kid stories.

2. The Girl Who Drank the Moon by Kelly Barnhill
Another juvenile novel. High fantasy, with very dark features. The people in the Protectorate abandon one baby a year in the forest as a sacrifice to the witch. The leaders don’t believe in the witch but believe the sacrifices keep the people cowed. The witch who is a good witch doesn’t know why they keep abandoning the children but rescues the babies and takes them to a community on the other side of the forest where they are adopted and loved. But one baby accidentally becomes enmagicked and the witch adopts her and raises her as her own. Except there are problems when her magic is too strong to be controlled and she is too young to be taught. Meanwhile the girl’s mother goes mad and is locked in a tower. And a young man in the town decides to defy the Protectorate and kill the witch.

The novel is lyrical and haunting. But man it’s dark. I’m not sure I think it suitable for children.

3. Stories of the Wild West Gang by Joy Cowley

Another juvenile novel. Episodic stories that follow an only child, Michael, whose parents are very prim and proper and who disapprove of his longing to spend time with his cousins, the West family, who have a bunch of kids and a much more adventurous lifestyle. The Wests are wild and crazy, over the course of the book Michael’s parents become a bit more relaxed about everything and let him have more freedom and more fun.

Just three books finished in March, all juveniles. Pretty much all finished before Lent. I decided my Lenten thing was going to be not starting new books but finishing books I was in process of reading. That is still a lot of books to rotate through.

1. The Discoverers: A History of Man’s Search to Know His World and Himself by Daniel Boorstin

Almost finished. At the end of March I have four or five pages left to read. But I’m not going to rush just to get it done. I’ll just have to wait until April to check it off.

Still going. I really love this book. McCullough is a great storyteller.

Making slow progress on this epic poem. A chapter or two a week. Don’t want to rush it. Walcott’s verse is dense and lush and the poem’s shifts between characters and from the past to the present, the mythical to the prosaic, require an alert reader.

4. The Poems of T. S. Eliot: The Annotated Text edited by Christopher Ricks and Jim McCue

I dove into the notes for Ash Wednesday at the beginning of Lent and then haven’t done much since. It’s a big beautiful book, but I almost need an excuse to pick it up.

5. The Soul of Elizabeth Seton by Joseph I. Dirvin

I was reading this last Lent and didn’t finish it. Time to dust it off and give St Elizabeth another go. There’s one chapter that’s slow going but if I can get past it I think the rest of the book will be quick again.

6. Reed of God by Caryll Houselander

I’ve been reading this one slowly, very slowly, for years. I picked it up in Advent and then put it down again. I read a page or two here and there and then abandon it again. So far this Lent I’ve held true. I read a few pages and then lost the book.

Diving into Elizabeth Scalia’s newest book. It’s not a difficult read, but it’s challenging in a good way, a short of examination of conscience. Maybe I can finish it this Lent?

8. God in Search of Man: A Philosophy of Judaism by Abraham Joshua Heschel

Picking this one up again. I read a few pages this fall and then it got put aside. I really like Heschel’s philosophical approach and approaching questions about God through a Jewish lens is fascinating. It’s familiar and yet slightly foreign and yet not at all alien.

Another one I’m picking up again after abandoning it. Hoping to finish by the end of Lent.It’s not a long book or a challenging one. St Pius was the saint the Saint’s Name Generator picked for me and I’m reading a book to get to know him a bit better. There’s some interesting history here: his excommunication of Queen Elizabeth, the Catholic League and the Battle of Lepanto, his many reforms.

I wasn’t going to start any new novels in Lent, but this one called to me at a weak moment and I found myself pulled in. I’m only allowing myself a section a day.

11. Children of Earth and Sky by Guy Gavriel Kay

Rereading to see what I missed the first time through when I flew through it. I’m a terrible reader on the first go and I needed to take this one more slowly to gather my thoughts.