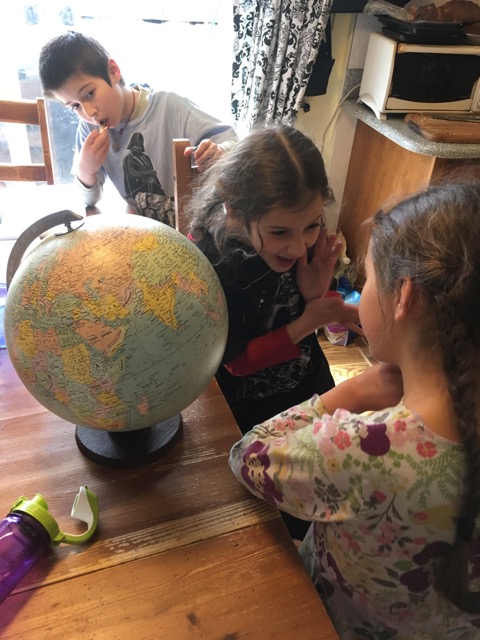 Ben did math, copywork, letter workbook, and read a Bob book with me.

Anthony did math, read me a chapter from Great Americans, copywork.

I played Scrabble with the girls until lunch. After lunch Sophie and Ben played War until story time.

Afternoon stories: Read Sun Slower Sun Faster, I fell asleep after that so no more stories.

Bella did math, copywork, we briefly analyzed and diagrammed her dictation sentence. She did a Latin lesson. And read me a poem, Casey at Bat.

Sophie did math, copywork, read me Geography, did a Duolingo lesson.

Ben did math, copywork, letter workbook, and read a Bob book with me.

Anthony did math, read me How Do Dinosaurs Say Goodnight, copywork. He also read all of Akimbo and the Baboons and Akimbo and the Lions. His first completely independent chapter books.

Anthony did math, read to me from Stories of Great Americans, did copywork.

Ben did math, letter workbook, copywork, and read a Bob book with me.

Sophie did a page of math, copywork, read to me from her Geography, and we looked at the first line of the Hail Mary in French.

Bella finished two incomplete pages of math, did copywork, reviewed Latin vocabulary, wrote out her dictation, and read a chapter from Galen and the Gateway to Medicine and wrote a sentence about it in her reading journal.

Dom brought home an old globe that was discovered in a closet at work which the office manager was going to throw away. The kids were excited because I haven’t yet replaced our old globe, which fell apart after being used as a soccer ball (not really, but it was kicked around a lot). The girls immediately began playing a game with the globe as the inspiration. I immediately began wondering exactly when it was made. It had the USSR on it, so I knew it was fairly old. I wondered how far I could narrow it. I started googling and managed to get it to within 1971-1979, based mainly on name changes of countries in Africa. Then I had to go do other things. But later Dom took over the hunt and found a web page by the manufacturer that gave a year by year list of name changes so that you could pinpoint precisely when your old globe was made. And then he uncovered a mystery. According to the website he found our globe shouldn’t be because it has both Belize, which was renamed from British Honduras in 1981, and Rhodesia, which became Zimbabwe in 1980. So he wrote to the manufacturer and they sent an email asking for a photo. Still waiting to see if they say anything about the anomalous dates. Is the globe a misprint?

Everyone did math and everyone but Anthony did copywork. And then we went to the grocery store. I was pleased at how early we got to work, how quickly it was finished, and how quickly we got through the shopping. The kids really are doing the bulk of the shopping now. I choose the produce and the meats and send the kids out to gather the rest of the shopping list, one or two items at a time. They all know the store, the big girls know how to compare prices. They know my usual brands. It’s smooth and efficient.

Afternoon stories: Daily lectionary readings, St Patrick’s Summer, Akimbo and the Elephants, Story of the World, Lives of the Greeks. Watched some videos from the You Tube Channel Physics Girl. We began with a video about Hawaii’s volcanos and plate tectonics, very cool. And then we watched a bunch of astronomy videos, one on exoplanets, one on stars, one on the New Horizons Probe.

We met and had some social time for the kids to run around and chat with friends and the mothers to chat too. Then everyone broke into small sessions by age. Even the mothers had a priest leading a meditation on the 7 Sorrows. Then we had adoration, with a guided prayer of the 7 Sorrows devotion.

Then lunch and then clean up and social time. Then we went home. Usually adoration and prayer would have happened after lunch, but snow was threatening so we cut the day a little short. Still, it was a prayerful time and fruitful. And it was nice to see friends, too.

did a little informal picture study with the girls as they looked over my shoulder at the paintings I was gathering for me Seven Sorrows of Mary blog posts. We had some really good, involved discussions.