Everyone did math and copywork. Sophie also read me geography. Bella also did a bit of Latin. Bella and I played a couple of rounds of speed and I tested her on the seven times table with some flashcards and she readily remembered them. The Speed is working!

Everyone was tired after staying up to watch the end of the Super Bowl but I promised them they could have a slice of cake after lunch if and only if everyone did their school work.

I had jury duty today, had to report at court at 8am, so I left before the kids were even awake. Dom, who usually works from home on Tuesdays anyway, held down the fort while I was gone. I was pleasantly surprised to get text updates from him as all the kids finished their math and their copywork and reading aloud. Of course he bribed them with a promise they could watch the Patriots’ Super Bowl parade if they got their work done. Keeping in touch by text I was able to answer a few questions, but for the most part they managed without me. A nice feeling.

I was almost impaneled on a jury, but weirdly I knew one of the witnesses for the plaintiff so I was dismissed. I got to sit in the jury box for a few minutes, though. The funny, embarrassing thing was that I didn’t recognize him at first. He’s a local Catholic, former homeschooling family, who knows Dom and I got to meet him and his daughter last year when Fr Roderick organized a meet up while he was in town. But I guess it’s easy to not recognize people when you see them out of context and you know I’m not great with faces anyway. I totally spaced on both the name and face when everyone involved in the case introduced themselves to the potential jurors. Then when I was walking to the jury box I saw that look of recognition on his face and realized “Oh that is him!” But I just sat tight in the jury box for a few minutes, seeing him flag down the officer of the court. I do so hate drawing attention to myself. It was kinda fun that I got to do a sidebar with the judge, though I felt a little sheepish for having let myself get seated when I did, in fact, know a witness after the judge had already asked us as a group whether we knew anyone in the case. It didn’t sound like a super-exciting trial, a chiropractor suing an insurance company over unpaid claims, but it would have been interesting to sit through a trial nonetheless.

And so ended my adventure in jury duty. They impaneled the jury without me and then our pool was told there were no other juries needed today and so we were free to go home. I came home in time for lunch to children who were very, very glad to see me. And then I got to explain again what jury duty is, why we have juries, etc. It helped that I got a nice little review on the orientation video.I was able to cite the Magna Charta and the Massachusetts Constitution as well as the Declaration of Independence and the US Constitution. And looked like a well informed homeschooling mom.

Bella found renewed interest in the Boston Massacre books she was already fascinated with; it not only describes the incident, but details the entire trial of the British soldiers, who were represented by John Adams, who incidentally wrote the Massachusetts Constitution. Bella was re-reading the trial sections and telling me about them and saying she understands a lot more about trials now because of the book.

Lucy had her four year physical first thing and then after that we did the grocery shopping, so no table work this morning.

We resolved to look up: Mrs. Morgan is she a real person? (Doesn’t seem to be. Montgomery made her up.)

Bedtime story: The Bronze Cauldron, story from Rwanda about killing death, interesting variation of the story of the fall.

Ben did math, finished his first letter book, and did a line of copywork. Anthony did a page of math. Sophie did half a page of math (she was having a very hard time getting into the math groove today), chose a new poem and copied a line (A Noiseless Patient Spider), and read me from her geography. Bella read to Dom, did a page of math, some copywork, and then practiced Latin by making a tiny Latin book for her doll. She made a bunch of doll books and had a doll school time.

Sophie read about the Giant’s Causeway in Northern Ireland so we looked at pictures and speculated about what could cause that kind of structure.

Also, Bella was dropping utensils on my kitchen scale and noticing that the weight goes up when the object hits and then goes down: “Oh! It’s measuring the force of the fall! I didn’t know you could measure force!”

Sophie, Ben, and Anthony briefly went out to play in the snow. Lucy and Bella sensibly stayed in out of the blizzard.   Afternoon stories: Anne of Avonlea, Secret Soldier, St Patrick’s Summer, Calpurnia Tate. Good discussions especially about SPS.

Following stories we watched a video about recreating theVestal Virgins’ hairstyle, Bella reminded me about it.

Bella and I discussed the origins of the myth of Atlantis.

Everyone did math. Ben did a letter page and copywork and we played a game making letters out of the linking cubes and then making words with those letters. Sophie did a page in Miquon and copied a line of her poem. She did not read to me. Anthony did a page of Miquon and did not read or do copywork. Bella read a poem to me (she’s been reading to me from the Winter Poems picture book anthology, illustrated by Trina Schartt Hyman), read to Dom from The Secrets of Vesuvius, did a page of math, and some copywork. And wrote in her reading journal. She’s reading a book about Yellowstone’s super volcano, and she and Sophie are both reading Johnny Treegate’s Musket, also Bella is re-reading Carry on Mr Bowditch. I think I also saw her reading the Childhood of Famous Americans book about Paul Revere. She narrated a bit of the supervolcano book at dinner.

Afternoon stories: Anne of Avonlea and St Patrick’s Summer. Too congested to read more than that. I went and took an unintentional nap. 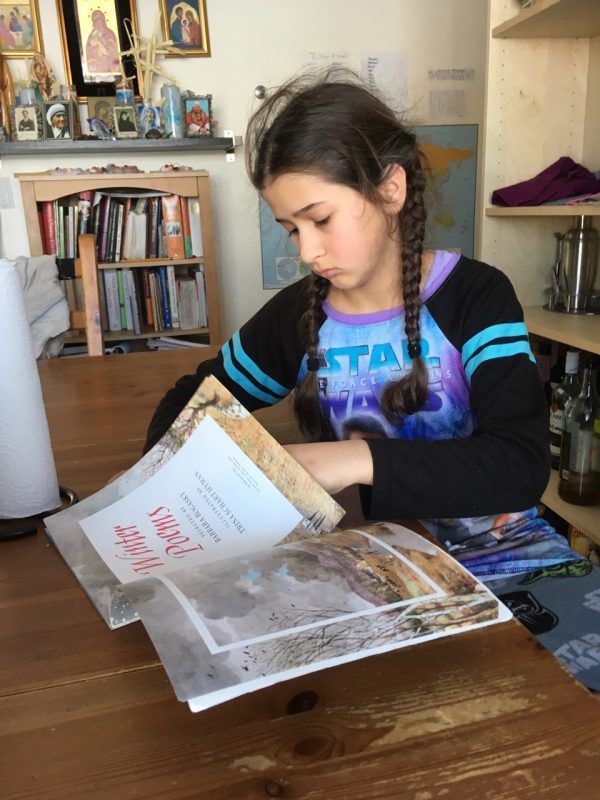