To Watch the World Fill up with Snow
6 comments
Share:FacebookTwitter
Poetry

To Watch the World Fill up with Snow 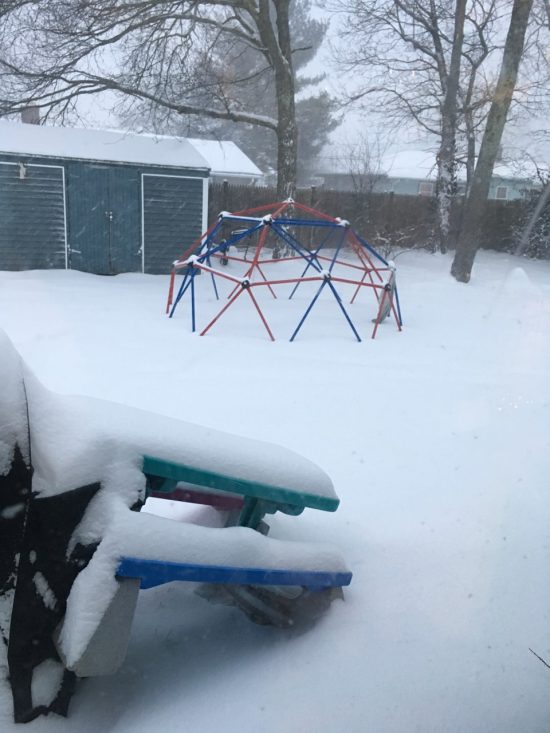 XIII
It was evening all afternoon.
It was snowing
And it was going to snow.
The blackbird sat
In the cedar-limbs.

Wallace Stevens from Thirteen Ways of Looking at a Blackbird

I lost most of the day, though, unable to enjoy either the bundled up goodness of a snow day or a tramp outside. I woke up with a headache that got worse and worse until by noon I was nauseous and unable to read or bear any light. I had to hide in my room with the space heater on and the curtains drawn and hope to pass out and sleep away the pain. Which is what happened.

I woke up at three to the smell of a delicious beef stew simmering on the stove. Dom told me he’d put on The Empire Strikes back for the kids in the office so I could have quiet, though we’d been planning to watch it today anyway. And then followed it with Return of the Jedi since I was still out when it was over.

I had planned to get some house cleaning done. Maybe to even sew some patches for the boys’ jeans. All the store I laid in in September now have holes in knees. And I’m determined I’m going to learn how to sew a decent patch. But alas, the day was wasted with darkness and drawn curtains.

But I woke up before sunset at least and was able to admire the white world through the windows. I’ve lived here almost seventeen years now and it still isn’t old, the magic of the first big snow. This Texas girl still gets a bit giddy even while my husband sighs about the shoveling. For him it’s mainly a pain to be moved, a trial to endure with curses and deprecations. But I still want to put on my boots to be the first to tramp a path, to see the poetry of the unspoiled whiteness.

Dust of Snow
by Robert Frost

Has given my heart
A change of mood
And saved some part
Of a day I had rued.

We’ve had a bunch of crows in the neighborhood recently and I’ve put in a store of unsalted peanuts in the shell to toss on the roof. I’m hoping to befriend them. I’ve seen them perched in nearby trees and once I did see them on the roof eating my peanuts. I’m not good at consistency, though. And I can’t yet get them to come down to where we can see them in the yard. If I put the peanuts on the ground the squirrels get them too fast. I have seen the jays swoop down to get them too.

But I’m fascinated by the crows and I want them to become regulars in our yard so I can watch them more. I love hearing their caws across the rooftops.

But throwing peanuts on the roof after a snow probably won’t do any good. They’d just sink and get buried.

Yes, the newspapers were right: snow was general all over Ireland. It was falling softly upon the Bog of Allen and, further westwards, softly falling into the dark mutinous Shannon waves. It was falling too upon every part of the lonely churchyard where Michael Furey lay buried. It lay thickly drifted on the crooked crosses and headstones, on the spears of the little gate, on the barren thorns. His soul swooned slowly as he heard the snow falling faintly through the universe and faintly falling, like the descent of their last end, upon all the living and the dead.