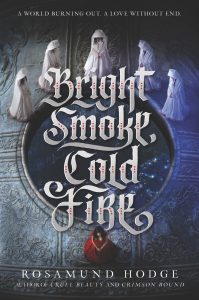 “The walls that kept out death could drive you mad.”

Rosamund Hodge writes darkly compelling fantasy stories haunted by images of blood and human sacrifice and death and mystery. Does that sound off-putting? They’re not gory, not horror; but they do probe into the darker reaches of faerie. Highly allusive, she draws on fairytales and myths, folk tales and folk songs, and classic literature, to create original worlds that feel both familiar and uncanny, inhabited by characters who are not always likable but who are credible, strong and compelling.

Her latest novel, Bright Smoke, Cold Fire, loosely based on Romeo and Juliet, is set in a blood-drenched, death-haunted, post-apocalyptic world where as far as the inhabitants —and the reader— know Viyara is the last remaining city in the world that is inhabited by living people and not by the zombie-like revenants.

Hodge seems to like small pocket worlds like the one in her debut novel, Cruel Beauty, rather than sprawling nation states and complicated geopolitical drama. “A little world entire, most beautifully made. . .” The words describe Romeo, from Juliet’s point of view, but could easily describe the world of the novel. There’s an intensity to this approach, but also a fairy-tale sort of unreality. It has a similar feel to the sort science-fiction stories about people in space stations or extraterrestrial colonies. I keep thinking of Neal Stephenson’s novel Seveneves, the section after everyone has left earth and the colonists are alone and struggling to survive. You’re in a dream world, a nightmare world, a world where all the external rules we take for granted no longer operate, but the truths of the human heart are still what they have always been. And it’s the drama of the human heart that takes center stage. Hodge’s novels are very interior, more about getting into people’s heads than about exploring the great unknown.

And the world of Bright Smoke, Cold Fire, is a very disquieting world. I’m not quite sure whether to classify it as dystopian, post-apocalyptic, or nightmarish. The world is steeped in blood, it’s very existence is predicated on human sacrifice. Though at least some of the characters are awake enough to rebel against the horrors their world imposes on them, I’m still not sure this world is worthy of, or capable of, being redeemed. Can Hodge make me believe that there’s anything here worth salvaging? Sometimes I think yes, and sometimes I think no. Sometimes I think this story is going to end in tragedy as even the deaths of the protagonists wouldn’t be enough to bury all the strife.

Of course it’s too soon to really make any final pronouncements since this is only the first half of the story. It remains to be seen how the sequel will develop the characters and the plot and how it will unfold the various mysteries of this world. I have so many questions about the world of the city, the gods, the religion, the society, and the broader world outside the city.

The two protagonists of this tale are not the star-crossed lovers of Shakespeare’s play but the jilted would-have-been other spouses: Paris, who in Shakespeare’s play is destined to be Juliet’s husband and in the novel is supposed to be her Guardian, in this telling is Juliet’s cousin rather than the Prince’s kinsman. And Runajo, who is Romeo’s former love-interest, the oddly-named replacement for the the Rosaline of the play. Like Rosaline, she has rebuffed Romeo’s attentions, and like Rosaline seems to be, she is a sort of consecrated virgin, a novice sister of the Sisterhood of Thorn.

We meet Romeo and the Juliet in the prologue scene at the moment after he has killed Tybalt when he comes to Juliet to face the consequences for what he has done. It is a powerful scene and we have to wait a long time before we see the two of them together again. There are four or five of these flashback vignettes between the two lovers in the novel all told in the present tense from a limited third person point of view, focusing on Juliet’s thoughts and feelings. These are the only chapters with titles instead of numbers. Interludes, really, stuck between the numbered chapters. Used sparsely as Hodge does, they’re intense and effective. The final scene in the novel, the scene where Romeo and Juliet first dance, is another.

Oh a thought about one of those scenes: Juliet unmasking before Romeo, is it perhaps a hint towards Lewis’ Till We Have Faces? There’s something here about names and faces and really knowing each other. I like how Hodge toys with the temptation we all face to dismiss Romeo and Juliet’s romance as shallow and superficial: they can’t really know each other, they are young and foolish, they’re just infatuated puppy love, it’s not really Real. One reviewer on Amazon dismissed it as “Instalove.” And yet Hodge gives us two characters whose milieu— and especially their families— have denied them the ability to be real. Romeo has more substance to him in a way, because he has more freedom, but in a way he’s more shallow because he’s never really suffered, never really experienced life. All he knows really are the poems in his head. He seems to be a will-o-the-wisp, happy-go-lucky and carefree, a sharp contrast to the Juliet who knows only duty and constraint and who has no freedom at all except the freedom to dream of a little larger scope for her duty: to protect the whole city and not just her family. It’s an interesting recasting of the traditional gender roles: Juliet is the warrior, duty-bound, Romeo is the playful poet, tossed here and there by his whims.

There are no mothers in this novel. Somehow that seems highly significant. And yet I’m not sure what to make of it.

The Juliet is a sort of Buffy or River Tam, a warrior maiden, created as such not of her own free will, but chosen to be a sort of vengeful Fury, bringing the guilty to justice with the blade of her sword. Her encounter with Romeo opens up a whole new world to her, a world outside the stifling confines of the family. This part of the plot made me appreciate some aspects of the original play a little more, the way Juliet is so very limited both in her experience of the world and her ability to choose a path for herself.

Hodge’s world building is superb, it is darkly complex and there is a deep mythology to unravel. Runajo doesn’t believe in the gods and yet there seem to be more powers in heaven and earth than are dreamt of her her philosophy. She only believes in the power of blood, the power of death, and the power of books and she hopes to save the world by finding lost knowledge that is trapped in the closed library that is haunted by the undead revenants and the monstrous reapers. It’s hard to see where her redemption might come from.

It’s difficult to make a final evaluation of the novel because this is the first volume in a duology. I must say, I think the publishers did a horrible job of making that clear anywhere in the book. I only know there’s a second volume coming because of chatter on Facebook. So I won’t be surprised if there aren’t quite a few disgruntled readers who believe the book book ended terribly.

I’m left with a bunch of questions and a burning desire to find out what happens next.

Some of my questions (in no particular order):

1. What is the significance of the novel’s title? Smoke and fire didn’t jump out at me as thematic elements, but I can be kind of thick as a reader, despite my English degrees. Usually on the first read of any book I’m reading for plot and pleasure and am not very sensitive to details and shades of meaning. So I’m sure there are elements I’m overlooking.  Is the bright smoke of the title “the white fog that killed every person it touched” or the smoke from the cremated bodies, burned so that they would not rise again: “the furnaces of the Sisters never cooled”? Is the cold fire the fire of the furnaces or the fire of Runajo’s desire?

2. I have lot of thoughts and questions about names and naming, which are a thematic element in both the play and the novel.

“O, be some other name!
What’s in a name? That which we call a rose
By any other word would smell as sweet.
So Romeo would, were he not Romeo called,
Retain that dear perfection which he owes
Without that title.”

Interesting that in BSCF Juliet is not a name but a title, a description of a function. She is not a person called Juliet, she is in fact a nameless girl whose name has been stripped from her so that she may be The Juliet, one in a series of Juliets.

Also interesting that Hodge keeps the names Romeo, Juliet, Paris, and Tybalt; but Rosaline becomes Runajo. Why is that? What is the significance of the name Runajo? And the names Montague and Capulet are changed into Mahyanai and Catresou. Those names pique my curiosity, but I can’t find any significance. Probably it’s a red herring, but in a novel where names seem to matter, it’s puzzling.

3. And then I’m also puzzled by why the Catresou family choose a young girl to be the protector of the family honor. It’s such an unlikely choice. Is there a reason the magic they use only works on women? I keep puzzling about it and am not satisfied. I hope the second volume explores the magic that makes the Juliet.

4. Runajo doesn’t seem like a very reliable narrator. How much are we supposed to trust her point of view and her impressions of what has happened?

5. Is the city a living entity? Where does that fit into the overarching mythology? And while I’m thinking of mythology, what exactly are these gods which Runajo doesn’t believe in?

6. What exactly is the connection between the revenants and the blood sacrifices?

7. Is the city of V really the only surviving human enclave as the inhabitants believe or might there be others? I suspect it’s the former, but it might be interesting if they’re wrong.