I did a math lesson with the boys. Anthony did a line of copywork on the whiteboard. Ben practiced writing W and helped me think of words beginning with W.

Story time: Pigeon Post, Catechism and Faith and Life— both have synced and so we read about the second commandment twice, but they were complimentary rather than repetitive so I think it worked out well. Lord of the Rings. And then we read two Pooh stories because it’s been far too long and my kids aren’t as familiar with Pooh as they should be. They laughed and laughed.

Kids watched the first episode of Wildest Africa and then an episode of Monkey Thieves.

Dinner lectio from Jesus of Nazareth about the betrayal of Judas. Discussion about Lord of the Rings.

Bedtime story: It Could Always Be Worse.

Discussion about daily Gospel and readings.

For Bella math and copy work and Latin. She drew an imaginary island, a contour map and we discussed contour maps. Also she spent time with the atlas. Reading The Hobbit. And she and I played Speed with the fours deck.

Sophie did math and copy work and then drew in her sketchbook and watercolored her drawings. Mostly legos, some wooden beads and other small objets from around the house. She read me a chapter from the Gospel, about the wise and foolish virgins and the servants with the talents.

Math with Ben and Anthony. Anthony read me a Bob book and then copied a sentence. Or rather traced a sentence I’d written on the white board.

Watched some Hamilton cast at the White House videos.

Sophie and Ben and Anthony and Lucy water colored during story time.

Children watched Wildest Africa about the Namibian desert and the Skeleton Coast. Then Monkey Thieves.

Bedtime story: Year at a Construction Site and Year on a Pirate Ship.

Sophie is reading a book about St Paul.

Latin and math and copy work for Bella.

Sophie did math and copywork.

Looked at the map for the locations in Wildest Africa.

Math with the boys. Anthony read me a Bob book and then copied a sentence. Ben wrote some Xs.

Afternoon stories: Finished Pigeon Post. Catechism and Faith and Life: 4th commandment. Story of the World: the Balkan mess. Lord of the Rings, finished the chapter on the stairs of Cirith Ungol, the best scene in the book.

Kids watched Wildest Africa about the Kalahari, I think. And Monkey Thieves.

Lectio divina: Jesus of Nazareth, about feet washing and confession.

Bedtime story: Song of the Swallows.

Bella and Sophie did math. We went grocery shopping.

Afternoon stories: We Didn’t Mean to Go to Sea, Catechism— the fifth commandment, Story of the World— the last emperor of China, Lord of the Rings, Shelob’s Lair.

Then I had to cut stories short to go to the doctor.

Today was Lucy’s baptism day so we had a special dessert and lit her baptismal candle and renewed our baptismal vows. One beautiful moment was when all the kids realized that the baptismal vows are just the articles of the Creed. We’ve been saying the Apostle’s Creed every day when we read the Catechism since it began with the Creed. We recite the Creed and now the seven sacraments and are working on the 10 Commandments. Anyway, the glimmer of recognition in each face as first one and then another recognized what I was reading and they were responding to, it was beautiful. This is the faith of the Church. They’re starting to see how it connects.

We had the homeschooling Lent retreat today. That took up the whole morning and we didn’t get home till after 3. But we did find time to read: We Didn’t Mean to Go to Sea, Story of the World— about Vietnam, and a Pooh story— where does Christopher Robin go in the mornings. 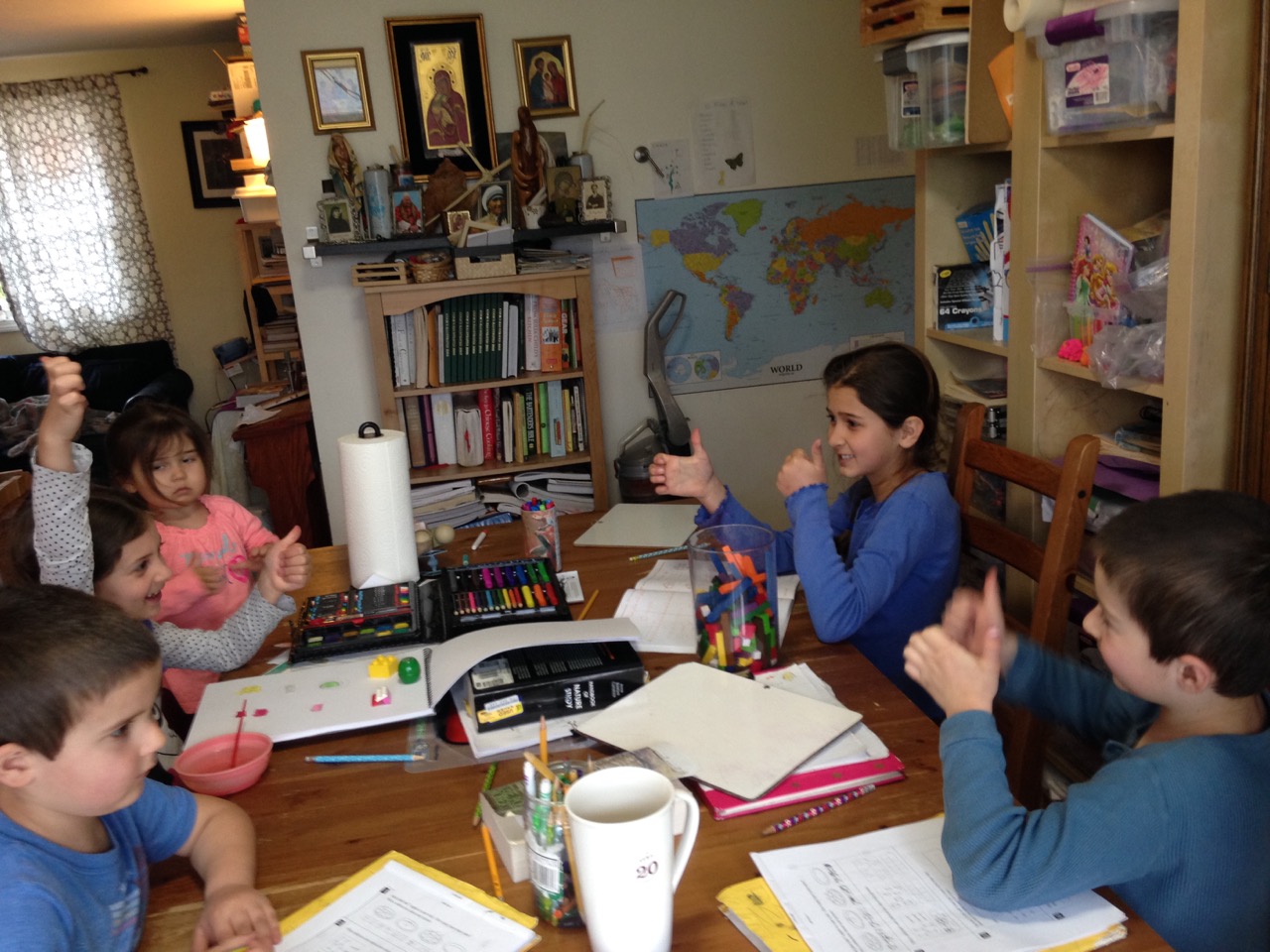