1 commentNovember 1, 20158 min read
[Catching up on a few weeks of learning notes. I’ve gotten just a wee bit behind, you may have noticed. No particular reason. They were already written up. Just slow about adding the photos.]

Dom had a holiday, so we did no table work.

But we did read our usual afternoon stories: Winter Holiday, Four Story Mistake, Bible story, My Family and Other Animals.

Bella finally finished filing out her multiplication table. Next step: drill until she has it memorized. I wish I could find a good game for the iPad that would drill her and be reasonably fun in the process. She limped through a bit of cursive and copywork. She kept sneaking off to read Canadian Summer.

Sophie did a bit of copywork, a bit of cursive, and did a page worth of math which I wrote on the whiteboard.

Ben and Anthony practiced writing some letters. Ben did O and Anthony did M. Then I did a math lesson with them.

Then I did a short reading lesson with Ben on the whiteboard. -at words: cat, rat, hat, sat, mat, bat, fat. Sophie read me a page of D’Aulaire’s George Washington and then narrated it. Anthony read me a Bob book. Then Bella read me a passage from Canadian Summer and narrated the rest of the chapter to me.

Then I let Sophie, Ben, and Anthony play on the iPad. They did a mixture of Slice Fractions and the Cars racing game.

Afternoon stories: Winter Holiday, Four Story Mistake, Elizabeth Ann Seton, Song of the Sparrows, Story of the World final chapter on the California gold rush, Wait for Me: Life of Father Junipero Serra. We looked at the U.S. map and found California and San Juan Capistrano. While I read Ben and Anthony and Sophie played with modeling clay and balanced cups and popsicle sticks.

The Song of the Sparrows book came in the mail today from a friend who was visiting in San Juan Capistrano and was looking to find a St Junipero Serra book for us in the bookstore. They were sold out, probably not really a surprise after the canonization. But she got us two other books plus a holy card and a medal of St Junipero and a little swallow pin. The swallow is doubly appropriate given how much my kids love the Swallows and Amazons and pretend to be Swallows. I love that richness!

Kids played more slice fractions this afternoon after time running around outside.

Bella did a page of math, one of the easy days when she actually declared, “math is fun!” She did a line or so of copywork, a sentence from Canadian Summer.

Sophie did a page of math and a line of copywork in the MP book.

Ben and Anthony and I did about half an MEP math lesson.

Then we all went to the grocery store.

When we came home we had lunch and then the big kids played Slice Fractions while I put Lucy down for her nap.

Afternoon stories: Winter Holiday; the final chapter of The Four Story Mistake; the first chapter of Story of the World Volume 4 and then made Crystal Palace models from the activity book, looked at pictures of the Crystal Palace online, read about the fire that destroyed it in 1936. And then read a bit more about Queen Victoria in Our Island Story. Bella recalled that the Swallows called their little sister Vickie because she looked like Queen Victoria and we talked about who was ruling England during the time of the Swallows and Amazons— George V. I need a chart of the kings and queens of England.

The kids looked at an orb spider on her web, spotted goldfinches and chickadees, and tufted titmice. And got very excited at a huge flock of starlings, which I informed them is called a murmuration of starlings.

Went to Sheep Pasture in Easton, a working farm and historical site. The theme was foraging. The goal was to investigate edible and medicinal plants and to identify a couple of poisonous plants. We started with identifying red and white oaks and talked about soaking acorns and making flour out of them. Then we looked at jewelweed (used to relieve poison ivy itch) and Joe Pye Weed (used for fever) and plantain (good for stings). Identify poison ivy. Grapes, hickory nuts. Then mushrooms: puffballs, giant puffballs, which are edible. Queen Anne’s lace, bayberry bush. It was a lovely hike on a gorgeous fall day. After the hike we had a picnic lunch, the kids played. We looked at chickens and sheep, a cow, goats, and geese. And everyone had a really lovely time until Sophie fell while climbing a rock wall and got a huge scrape on her torso and ripped her shirt. 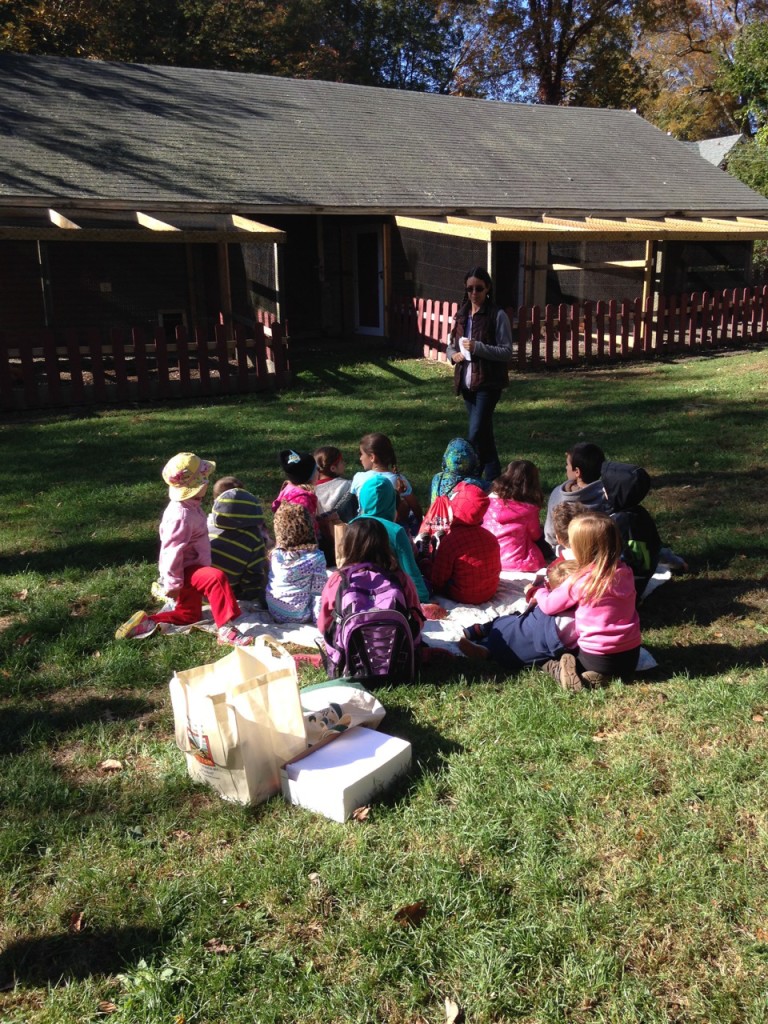 I had to change the dressing on Sophie’s scrape. The dressing that was stuck to the scab. Ick. That pretty much derailed the morning for her. No work after that. She played on the iPad and milked it for all it was worth.

Bella did a little math. Anthony read me a Bob book. I did a math lesson with the boys. They were in a very, very silly mood and playing more than listening to directions. But… but they were playing around with reversing the greater than and less than signs to show that five bugs is less than 8 bugs and four bugs is greater than four bugs. And I’m thinking if they can deliberately use the wrong sign as a joke, then that shows that they really get the concept. They’re thinking in the language of math, making jokes in it, playing with it. And that’s pretty cool. Two little boys giggling over math jokes.

Afternoon stories: Winter Holiday, Elizabeth Ann Seton, Story of the World chapter on Admiral Perry and the opening of Japan, Microbe Hunters chapter about Louis Pasteur. Bella gave a really top notch narration about the SoTW chapter. I was impressed. We had good conversations about Winter Holiday and E.A.S. and Pasteur.

Kids spent time on the iPads. They might have played Slice Fractions. They definitely played the Cars game.

Bella has been re-reading Half Magic. Sophie was reading Abigail Adams.   Bedtime stories: Hist Whist and A Fine Dessert.