Homeschooling Classes at the MFA

On Friday we decided to check out the MFA’s classes for homeschoolers. Children are divided into four different age groups: 3-5 years, 6-8 years, 9-11 years, and teens. i enrolled Ben and Anthony in the 3-5 class and Bella and Sophie in the 6-8 class. Lucy and I tagged along with the boys while the girls were fine going off on their own with the group.

After all the children had checked in and made a popsicle stick man, we set out on our tour. We went to several different galleries, upstairs and downstairs in the museum. We saw a wooden sculpture of a Japanese bodhisattva, a bust of Dante and Virgil, a contemporary Chinese sculpture of carved wood, and a photograph of Dizzy Gillespie. At each piece the children were invited to speculate a bit about the piece and about the pose. They were invited to pose the limbs of their popsicle figures to imitate the piece. The children had opportunity to show their posed figures to the teacher and to say something about them and he commented on them as well, pee wee art critique.

I wasn’t surprised that Ben neither answered questions nor asked any. He and I engaged in some whispered conversation about the pieces, but he doesn’t talk to people outside the family. However, he did volunteer to let the teacher look at his posed figure several times. It was interaction, if only passively. Anthony and Lucy also volunteered their guys. (The teacher was gracious and even examined Lucy’s.) Anthony even volunteered a sentence about one of his poses. He is not shy about talking to strangers. Not at all.

My inner pedant wanted to say much more about the pieces we saw. I’d have said more and listened less. But his technique was probably more effective for this age group. Or for any age group.

Anyway. We then returned to the classroom where each kid was given a styrofoam cup and a bunch of supplies and allowed to make a messy Dalek looking robot creation. At least, I don’t know about the other kids, but my boys made robots. With lots of arms and eyes. 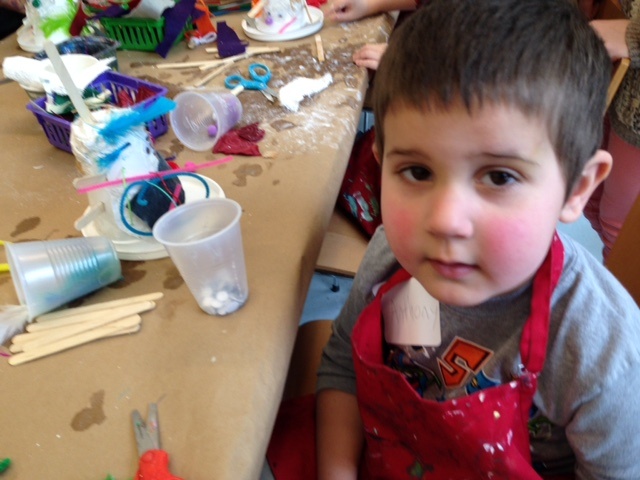 Meanwhile the girls had done a class on Food and the Art that Holds It. They began by drawing pictures of their favorite foods. Then went and saw a variety of vessels that hold food. Then they made vessels out of quick drying clay. And after that they made little figurines. I never saw Sophie’s bowls or whatever, but Bells had a gravy boat and a little bot. Then Bella made a Virgin Mary and Sophie made a little sculpted figure that I think was meant to be a woman.

After the class we had lunch in the cafeteria. The girls told me about their experiences and the boys told them a bit about ours. Somehow Bella asked me about whether Monet was alive when the museum opened so I looked up the relevant dates to find that Monet was 36 when the MFA opened and that was two years after the exhibition of Impression Sunrise. Fun to make those connections.

After lunch I chatted with a homeschooling family outside the bathrooms. Their oldest was five and they hadn’t heard of the MFA’s classes, so we had a nice chat. She was most impressed by my handling five kids by myself. I explained that we were old hands at the museum but usually do come with my husband or some other adult. But after many visits, I feel like it’s routine and I know how to deal so being solo isn’t so scary.

After lunch we decided to go to one gallery. Bella really wanted to go back to the Impressionist gallery and so did I. Their class had gone through on their way to somewhere else and she’d spotted a Monet painting of haystacks that she wanted to see. So we went and looked at Degas’ dancer and her pose, to continue the boys’ theme. We tried to stand in the same pose she was in, pointing our toes and lacing our fingers and tilting our heads back. Then we looked at Bella’s haystack and a Rodin statue of Psyche. I briefly told the girls the story of Cupid and Psyche. Then Bella drew my attention to a field of poppies near Giverny, which resonated with her after reading Linnea in Monet’s garden in which the heroine goes to Giverny, and Charlotte in Paris in which the heroine also visits Monet in Giverny. We talked a bit about composition and color and how Monet had four canvases that he’d switch out as the light changed because what he was painting wasn’t the flowers and trees and such but the light on the flowers and trees, how the light changed the colors and the shapes and makes the landscape into a different picture.

Then we looked at Van Gogh’s postman and I talked to Lucy about his beard and hat and to Ben and Sophie about the colors in his hands and face, really looking at the brushstrokes and the lines of green and blue and yellow and pink and grey. Then we went to a Monet mother and child in a field and looked at how those brushstrokes had a completely different texture. These are very short lessons, just pointing out one or two things in each picture, because that’s all they have the attention for at this age, but they learn to see. We admired a couple of paintings of winter scenes, the light, the smoke, the falling snow. Several more Monet landscapes, a scene of Venice. Ben asked if it was the Taj Mahal and I said no, St Mark’s. And we talked about reflections and how light and water interact. I’m not sure they got that, but I tried.

Bella lamented that she hadn’t brought her sketchbook because she really wanted to try to draw some of the paintings. So I took pictures of her favorite paintings and the labels too so she could spend more time with them at home.

Then the younger kids were DONE. So we headed to the elevator and home. But right as we were nearing the elevator I heard music and a voice singing. Singing in the gallery. Bella went to investigate and we all followed. We passed a man in an elaborate Chinese brocade stole of sorts but by the time we got to the gallery there was no more music. We looked at a big silver urn and were reading about the symbolism and history when a docent caught my attention and gestured that I should turn around. The singer in the brocade stole thing was back and the music began and he sang. Oh so beautiful. I took a little video and answered Bella that he was singing in German and helped Sophie understand where the music was coming from– little speaker right behind the singer.

After his performance everyone clapped and then I went and found the explanatory signage that told about the performance. Then we really did head to the elevator. Made another detour to the bathroom and then to the coat check to get our coats. Then to the gift shop where everyone picked out postcards. I think it’s important they have art of their own to look at and enjoy. I need to hang them on their walls.

It was a long day but everyone was so very excited. They talked and talked and talked about it. When we got home Bella pulled out one of the postcards she got, I think it was a Van Gogh painting with houses, and proceeded to try to draw the picture herself.

So, yeah, a worthwhile experiment. I want to go again next week.