The End of the Fiery Sword: Adam & Eve and Jesus & Mary 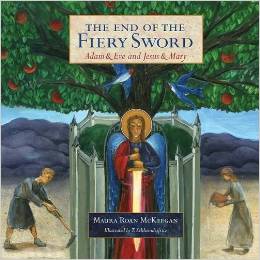 The End of the Fiery Sword: Adam & Eve and Jesus & Mary

Do you know about Adam and Eve?
About Jesus and Mary, too?
Two are from the Old Testament,
Two are from the New.
Their stories are the Word of God,
Their messages are true;
But when you see them side by saide,
A hidden part comes through.
Now take a closer look
At how their histories are told:
See the Holy Spirit work
As mysteries unfold.
Find the buried treasures
That Sacred Scriptures hold;
Let the New unlock the door
To secrets of the Old!

“The New Testament lies hidden in the Old, and the Old is unveiled in the New.” — St Augustine.

This delightful book uses a simple parallelism to introduce young children to Biblical typology, aptly summed up in the little introductory verse and the epigram from St Augustine.

It doesn’t explicate or preach, just tells the two stories in parallel, using imagery and sentence structure to help young readers make the connections on their own.

I usually am not a big fan of too-loose paraphrases in children’s Bible stories. Too often the theological subtleties get lost in the process because the adaptor does’t realize certain details are significant and so drops or changes them. But in this case the paraphrases are quite deliberately highlighting some of the theological subtleties that usually are lost in children’s Bible story books.

When Eve tempted Adam,
He ate the forbidden fruit,
In the Garden of Eden,
Adam hid from God.
He was afraid,
Because he had not done God’s will.
God came looking for him in the garden.
Adam betrayed God,
And now Adam
was going to die.

When Satan tempted Jesus
He ate nothing at all.
In the Garden of Gethsemane,
Jesus prayed to God, His Father,
He was in agony.
But He was ready to do
The Father’s will,
Judas came looking for him in the garden.
Judas betrayed Jesus,
And now Jesus
was going to die.

Now, I might have made a few different choices were I retelling the story. For example the Eve tempted Adam, Satan tempted Jesus parallelism seems to emphasize the idea of more blame falling on Eve than Adam, though I suppose that reading is undercut by the God came looking/Judas came looking parallelism. And I’d have made explicit the idea that the cross is revealed as the Tree of Life. But on the whole, they are all minor quibbles.

This book is very well done and is equally as worthy a tool for adults wishing to meditate on the Biblical typology as it is for children. The best children’s books are ones that adults enjoy as well, and by that criteria, this book most definitely is one of the best religious children’s books I’ve seen.

The illustrations are very nice, alternating between rich jewel tones and more subtle earthy tones. The figures are simple but not overly cartoonish. I don’t feel like the illustrations are too saccharine or condescending towards children. In fact there are a few moments where the illustrations reach beyond what the text says and add another extra layer of meaning. Like when the crucifix is made into a literal tree with rich red fruit, with shadowy ghost images of the gates to paradise now open. That totally makes up for the missing explicit Tree of Life reference in the text.

Or, perhaps one of my favorite moments, when Jesus and Mary face Adam and Eve in the book’s final spread and invite them out of the darkness and into the light and Jesus’s hands are raised in benediction with the nail wounds clearly seen while Mary is making a gesture of welcome. And, this is the really good part, two rays of light come from Jesus’ breast: a red one and a white one. It’s such a beautiful echo of the Divine Mercy image. And the Tree of Life is subtly in the background, behind Jesus and Mary.

Then there are also lovely swallows who appear in both the Eve and Mary spreads and in the crucifixion scene, a thematic element which ties the pictures together visually, though I’m not quite sure if there is a deeper symbolic meaning to the swallows. And I really, really like the way God looking for Adam in the Garden is represented not by a human figure but by a mandorla with an empty center filled with light and a border of angels.

When Adam and Eve died,
The gates of Paradise were closed,
But God had a plan
To open them again
Because He loved His people.

When Jesus rose from the dead,
The gates of Paradise were opened.
Jesus fulfilled God’s plan
To open them again
Because He loved His people.

The heart of the Gospel message, beautifully told, the good news that God loves us and has saved us. This book should be in every family’s library.