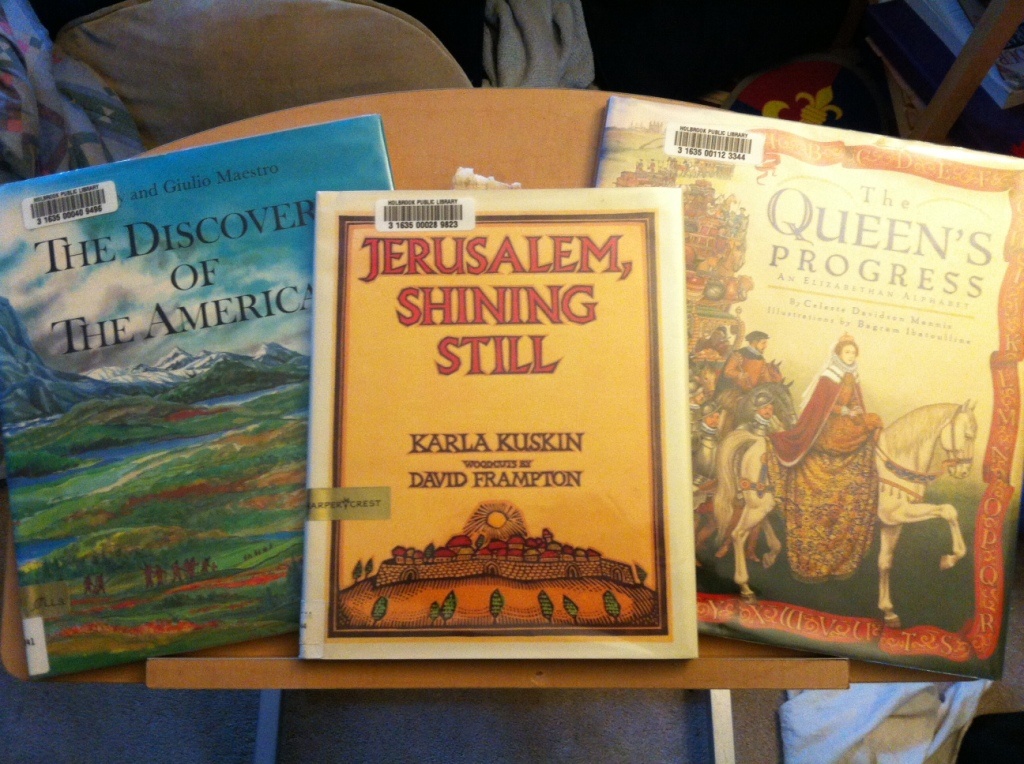 A beautiful alphabet book about Queen Elizabeth. I’m a sucker for a well-done alphabet book and this one really is first rate. The textiles are so lush! The pictures loosely follow the adventures of a servant girl and a page boy in the royal household. It includes the foiling of a plot to assassinate the queen.

When Elizabeth returned to London, she met with royal duties so weighty they would have crushed most men. The queen, by choice, shouldered the weight of these duties alone. The idyllic days of summer were a fond memory to warm her through a long, cold winter of responsibility.

Queen Elizabeth was tireless in her commitment to England. For over forty years she ruled her country with enthusiasm, dedication, and intelligence. The royal progress, a chance to travel among her people and see the fruits of her labor, was one of her greatest joys.

Now, Elizabeth is rather idealized in this book: “Q is for queen whose right is divine. A heaven sent ruler, and one for all time,” and “one of the finest monarchs in western history.” But this book is not the only source we have for her and I don’t really mind the emphasis on her positive qualities in a picture book. (The book does mention that she could sometimes be harsh to her servants but that she was also generous.) We have covered her faults in more detail from other sources. Bella adores this book and Sophie likes it very much.

2. Discovery of the Americas

by Betsy and Giulio Maestro

A lovely picture book that begins with prehistoric migrations and goes through Magellan’s historic voyage. I like that it discusses theories about early Japanese, Phoenecian, and Chinese explorers as well as St Brendan and Prince Madoc of Wales while clearly separating speculation and legend from historical fact such as the first proven sea voyage of the Vikings. It leaves room for new information to be added to a child’s set of knowledge if new archaeological discoveries are made without disruption of what they think is settled history, the way things ARE. Appendices at the back of the book contain brief information about lesser known explorers. Pictures are lovely and the text highly readable. We read this in an afternoon but you could break it up and make it last for several reading sessions. We’ve covered all this information before, but this book was a great review.

Look at it across the valley. The sky is dark and high, and the moon is hanging above Mount Zion by an invisible thread. Its light touches the stones of Golgatha and Mount Moriah. It puts gold on the crescents and stars of the mosques, gold on the crosses of the churches. It touches the Western Wall and turns the old, enormous stones, pure white.For three thousand years this city has been battered and burned, and then built up, rebuilt and built again.

This is a delightful little picture book about the history of Jerusalem told in a mixture of poetry and prose. There’s a little intro about time, a frame story of a narrator sitting and watching the sun rise over Jerusalem. Then it begins to tell the story of the rise and fall and rise and fall and rise and fall of the city with the story of David. The Solomon and the building of the temple, then the destruction by Nebuchadnezzar and the Babylonian captivity, then rebuilding… then the Greeks and the Maccabees, then Herod’s temple and Jesus and the Romans and then Constantine and the Persians and the Moslems… and so on through the British and the founding of the State of Israel.

It’s neutral about religion–Jesus is mentioned as a holy man and a teacher and founder, but not as God, not his resurrection– neutral but not to the point of being offensive. We know who Jesus was and he’s not the focus of this book. Bella did pick up on the flatness of the portrayal of Jesus (from a Catholic perspective) and speculated about the faith of the author. I explained it seemed to deliberately not emphasize one faith over any others so that anyone of any faith could enjoy the book.

I really loved the rhythm and repetition. This was a book that was a delight to read out loud. Here’s a bit that’s a sort of cumulative narrative element, repeated over and over with the new group added each time:

You have not forgotten that after the Babylonians came from Babylonia, the Greeks came and then the Romans, those worshipers of Gods and omens. Then the Persians came in troops, Moslems followed, groups and groups, the Fatimid Egyptian forces, Seljuk Turks on foot and horses. After that the Crusader, Saladin and more Moslems, the Mamelukes and the Ottoman Turks all came to stay, for a while and went away.

And there are snippets of verse too:

The walls were white in the morning air.
They glowed with gold in the afternoon
and under the arc of the darkening sky
each stone was as pale and as cool as a moon.

The woodcuts are evocative and match the text well.

This isn’t a book about the details of history, but about the sweep of time, an overview of three thousand years of history. I’m not sure it would stand on its own or be a good introduction to Jerusalem, but for children who already know it, this book becomes another piece in the mosaic, to borrow an image from Jennifer Miller. It is rich and poetic, alive and breathing. Bella loved it at once, even though she’d resisted reading it. Jerusalem is becoming a living place for her, real and beloved. I want that for her so much because I never had that connection until much, much later. Until quite recently, in fact.

Sometimes you find treasures when browsing the library shelves. None of these books were on any lists, but I’m so glad I found them. Books that review what we already have learned, that add beauty and grace to our lives.