So today we took a field trip to the MFA. There were two special exhibitions we especially wanted to see: the Quilts and Color exhibit and the Magna Carta. Also we wanted to see the Roman, Medieval, and Renaissance galleries to catch up with our history studies. An ambitious program and I figured we wouldn’t see it all today, but since we got a new membership, there will be more museum trips.

We’ve decided that we will do two memberships a year. Last year was the MFA. This year we did the Museum of Science and the Zoo, which will both expire at the end of August. So it’s time to think about what memberships we want for the coming year. A year without the MFA was hard. We were very ready to go back.

The quilts were awesome. This is a collection that was assembled by a couple of artists who came to quilt collecting serendipitously, surprised at how sophisticated was the quilter’s use of color. The collection of Amish, Mennonite, and Pennsylvania Dutch quilts is breathtaking. The focus of the curator’s notes is all on the use of colors. Patrons were provided with color wheels to carry around. The quilts were also paired with various paintings and other more traditional art forms that had similar use of color and design.

As a quilter myself I appreciated the skill and artistry of the specific pieces. It was fun to also see them through the eyes of the kids and of Dom, who really got into the exhibit.

I loved Dom’s photos that capture something of the array of quilts.

This barnraising quilt was the first one the collectors discovered. They were stunned by “the knowledgeable application of color gradations in complex arrangements” within a traditional arrangement. And realized this quilt was a work of art, not merely something to keep you warm.

This photo of the quilt with the lady’s head in the foreground is one of my favorites.

By the time we were done looking at the quilts (well, I wasn’t done, but the kids were) it was lunch time and so we headed off to eat, walking right past the gallery where the Magna Carta was. After lunch we had to backtrack all the way back to the other side of the museum. Oh well. 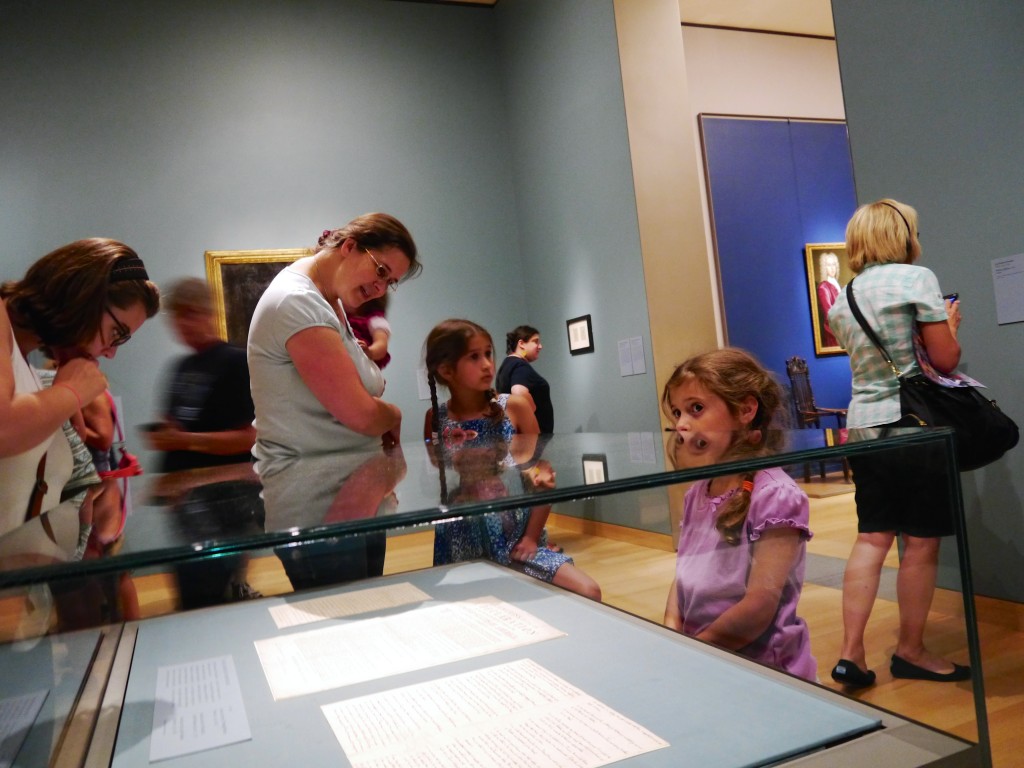 The Magna Carta was surprisingly white. Not as yellowed as I’d have expected an 800 year old parchment to be. It also looked like it had been folded and it had some small holes at the bottom. I didn’t get nearly enough time to examine it since I was holding a squirming toddler and there were crowds of people. Still, it was pretty cool. And tied into Bella’s history, since we read about it in her book this spring. We’ll get to the American Revolution in the fall.

We didn’t set out to see the American art, but we wandered through the galleries anyway. A favorite stop was this red room. Also, the model ships.

A brief stroll past some Medieval and Renaissance pieces. We need to go back and give them proper attention.

Yesterday Bella and I spent almost an hour reading about the development of medieval armor. All sorts of technical details about construction, nomenclature, etc. Today we examined this statue of a praying knight wearing armor. We were delighted to note the details of the chain mail, buckles, rivets, and hinges on the armor, etc. I’d seen the statue several times before and sort of halfway noted them, but this time those details popped.

Even though we covered the Romans in the spring of 2013, we never had got to the MFA to see their collection. So we had to go take a peek. Sadly, it was the end of the day and we were all getting tired. But Bella was still impressive in her ability to recall details and see where things fit. She identified statues of Hercules and Athena and many other motifs. She enjoyed the mosaics and frescos and coins and sculptures very much.

Dom really liked the coins. His parents used to own a coin shop when he was a boy. It’s a lifelong interest, I guess.

Little Lucy did pretty well. I’d hoped she might nap in the stroller, but no such luck. she was awake and kicking the whole time. And no, kicking is not figurative. But she wasn’t bad, just energetic. And in the gift shop she found a little set of quilt magnets that I bought. Turns out the brand name was Lucy Lu. And now that I’ve put them up on the fridge, she defends them against all comers. Make no mistake they are her magnets.

This morning as we were getting ready to leave Lucy told me, “Don’t say that me.” She is a very decided little person.

Anthony and Lucy and Ben all survived the museum pretty well. It isn’t their favorite place, but they made it through without any major incidents. I call that success.