Down in Adoration Falling 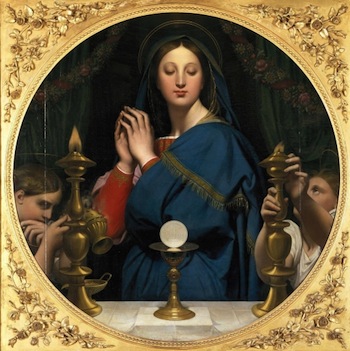 “Look with kindness on those who do not recognize your presence,
– reveal yourself to them, so that they may welcome you as Savior.
Christ, our life, hear our prayer.”

— from intercessions Evening Prayer on Monday, fourth week of Easter 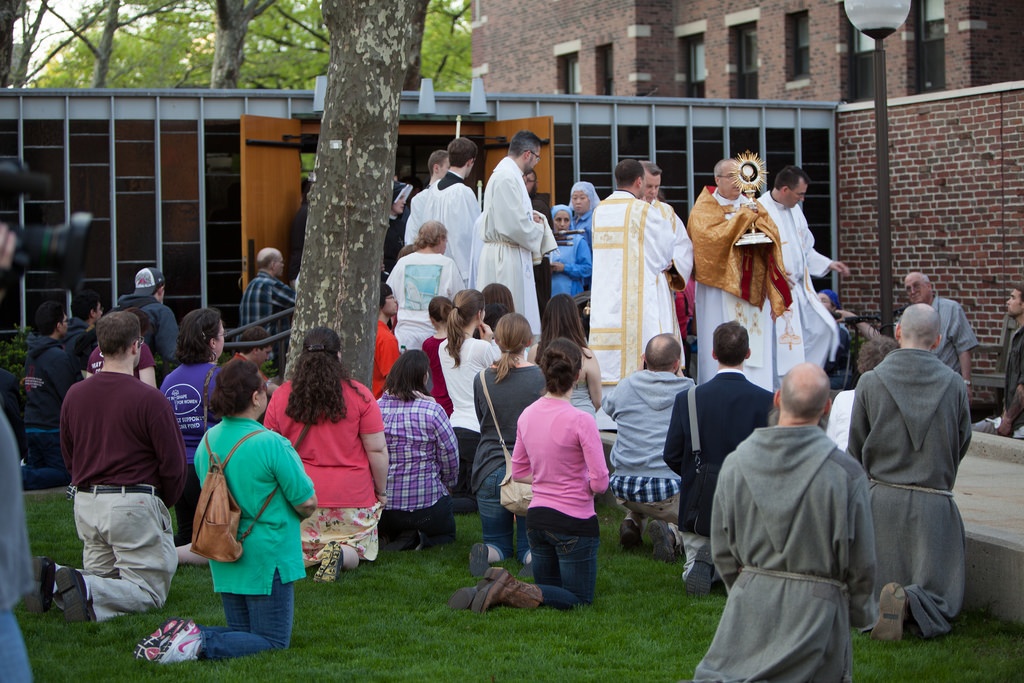 I really wish I’d had time to blog beforehand about the Satanic “black mass” that was scheduled to happen at Harvard on Monday night and then cancelled at the last minute. I spent part of the day discussing it on Facebook and forwarding various articles I found and then on Tuesday reading and writing about the beautiful Eucharistic Procession through the streets of Cambridge and the Holy Hour at St Paul’s near Harvard that were organized by the students at Harvard and nearby MIT.

Something ugly was planned, something evil and despicable. But what happened instead was glorious and powerful.

Give thanks to the Lord, for he is good
Horse and chariot he has cast into the sea 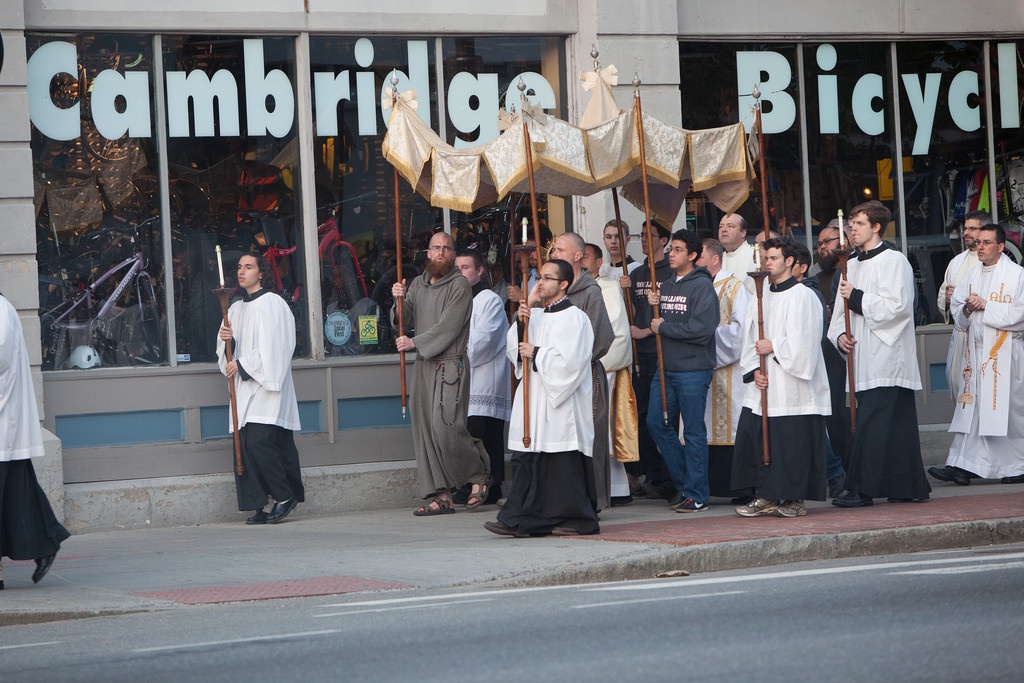 Here’s my belated roundup of responses written both before and after. I think they are worth reading and pondering.

First, in When I Am Lifted Up, I Draw All Men to Me Darwin Catholic gets the ball rolling quite well, following up on Elizabeth Scalia’s breaking the story with a thoughtful post that uses Harvard President Drew Faust’s statement as a jumping off point and lays out the issues very well:

President Faust certainly has more agency than she evinces here to shut down events that are “abhorrent” and “deeply regrettable”, but that whole discussion aside: I wonder what other event could have caused the president of Harvard to attend a Holy Hour in reparation for offenses against Christ and his Church? The Eucharist has power; you do not enter the divine presence without being affected. Those who hold a black mass and mock the Eucharist do so at the peril of their souls, because opening yourself to demonic influence, even in jest, even in disbelief, has consequences. And those who attend adoration do so in peril of their own souls, because opening yourself up to the idea of reparations, to the possibility that an offense has been committed against the presence of God, even as a PR stunt, has consequences, because the reparations are for our sake. Make no mistake, even though the whole point of a black mass is to “get back” at God in some way, to hold him in contempt with impunity, we are incapable of hurting God.

Let me say it again: we are incapable of hurting God. God is Love — not just loving, not just full of love. He is Love itself. He is not just joyful, He is Joy. No human agency, no sacrilege, no desecration, no humiliation, no vile torture, no crucifixion can steal the slightest particle of God’s divine Joy. No one can gain an iota of power over God. If Satan has no power over God, how much less do any humans doing anything in Satan’s name.

But humans can hurt themselves and other humans, which is why we who believe God throw ourselves on His mercy and implore it for others. God permits free will, and He believes in it more strongly than we do, it seems: He will let us fully experience the consequences of our actions and our beliefs. That is why we do reparation for offenses against Him, even if He can’t be offended. That is why we don’t respond to violations of the Eucharist with violence but with prayer. Jesus, who gave his back to those who beat him and his cheeks to those who plucked his beard, isn’t defenseless. He can take any abuse heaped on Him. He adopts the helplessness of the weakest in order to give each person a chance to respond freely to Him.

There’s plenty of discussion to be had about the extents of academic inquiry and freedom of speech and sheer hypocrisy in regards to Harvard’s role in hosting this despicable event, but I think that the promoters of the black mass are going to find a lot more spiritual consequences than they bargained for. “And when I am lifted up from the earth, I will draw everyone to myself,” Jesus said (John 12:32). Lifted up in adoration, lifted up in desecration: He draws each one, and each one must respond. Dear God, please soften all the hardened hearts you draw to yourself, including mine. 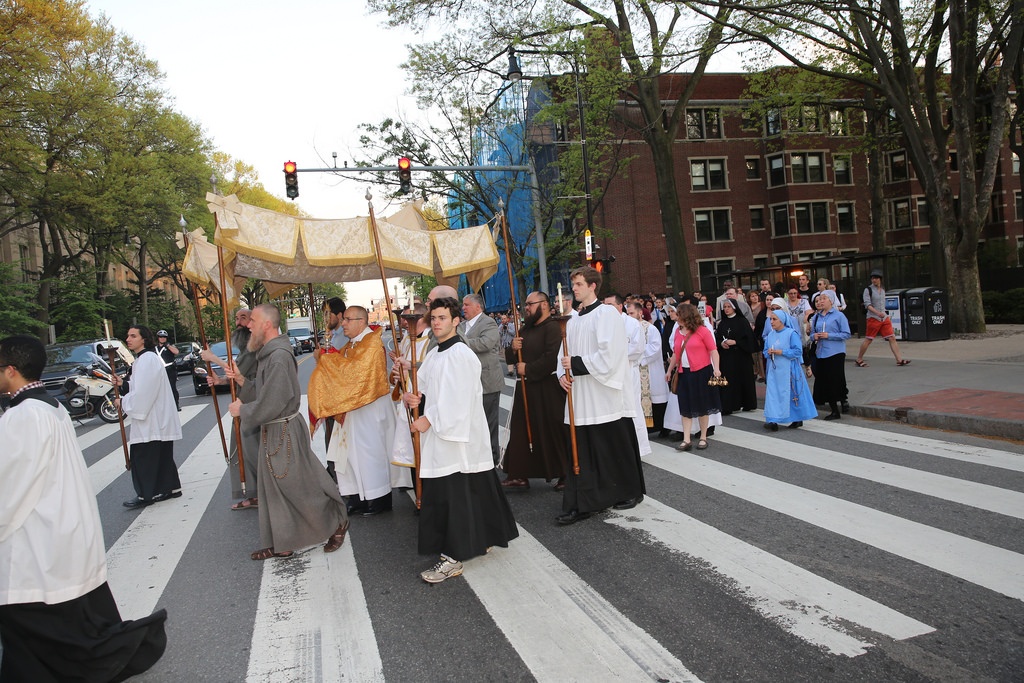 Dom chimes in with a reminder: Don’t think the Harvard Black Mass is the only desecration of the Eucharist:

this whole event is an important wake-up call to us. For one thing, black masses are not a relic of the past dredged up by the group. There are Satanists who regularly steal Hosts and to desecrate in their foul rituals but don’t advertise their ceremonies openly. And even on a less diabiolical level, how many acts of desecration occur in our parishes regularly. I don’t mean just unworthy reception of the Eucharist by people who don’t know better, but such acts as receiving while chewing gum, taking the Host from your mouth and either discarding it or playing with it, and the like. 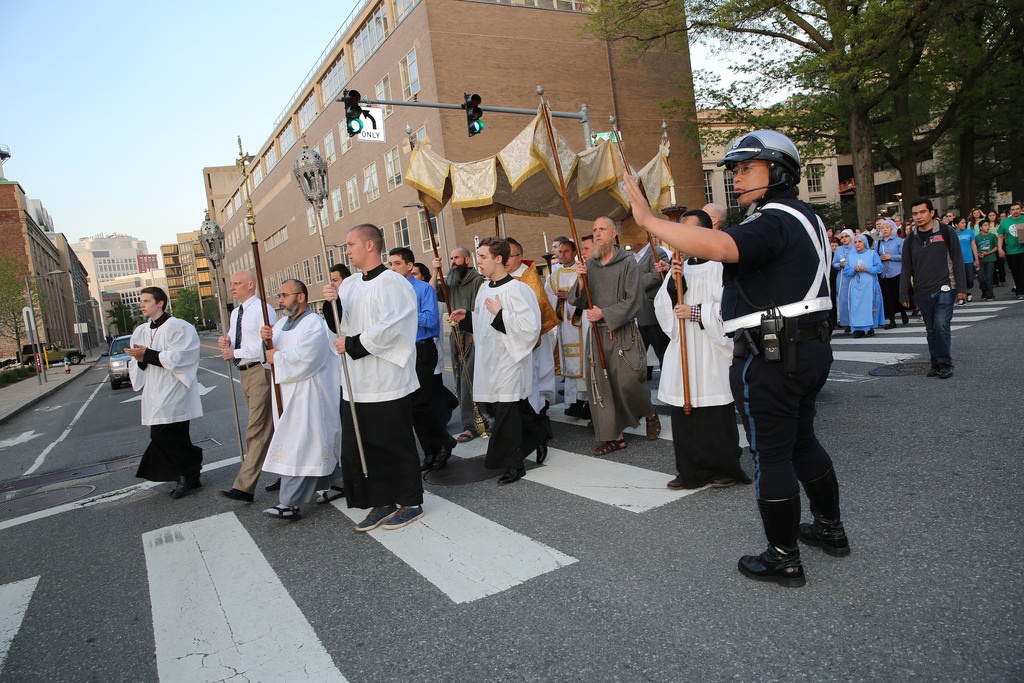 We didn’t merely win a battle in the spiritual combat; we launched an offensive.

And all this happened because a few deluded students scheduled a blasphemous mockery, and the Catholic community responded appropriately: not with an impotent fit of anger but with a confident show of faith. Satan overplayed his hand, and got burned again. 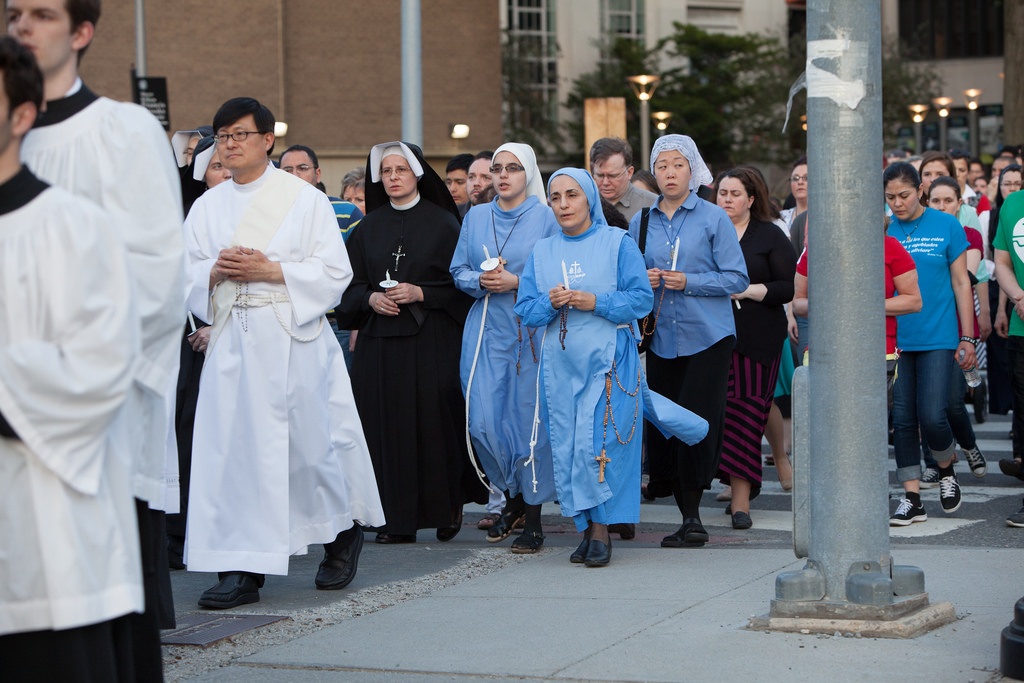 “The Eucharistic reparation done on Monday in Cambridge, in Fall River, and elsewhere, needs to be on-going and all Catholics must exercise a much greater Eucharistic vigilance”

“the devil’s . . . aim is not to seduce us to participate in occult rituals of Eucharistic desecration, but to get us to receive Holy Communion unworthily or not at all. While few ritually worship Satan, many unwittingly follow him.”

“The Satanic mass was stopped because social media made possible a massive and rapid response. . . . Can you imagine what the response would have been if all priests, parishes and Catholics regularly took advantage of this new means of communication? Can you imagine the future possibilities in mobilizing people toward the good and against evil if the Church more effectively inspired and assisted everyone to enter the digital continent?” 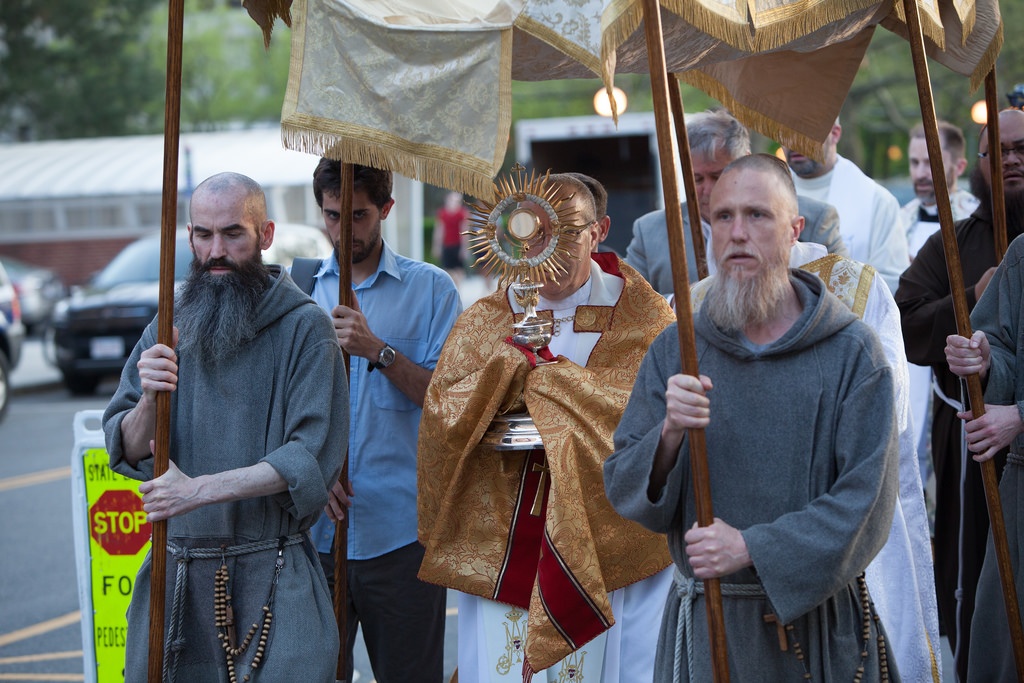 Bishop Christopher Coyne A codicil to the whole “black mass” brouhaha at Harvard :

Yet, here is the “kicker,” as a friend of mine shared with me this little historical tidbit. The spokesperson for the Satanic Temple said that the presentation of the Black Mass was to be based upon the description found in the book Lá-bas (“The Damned”) published in 1891 by the French author Joris-Karl Huysmans. Huysmans was notorious for the earlier publication of his book À rebours (“Against Nature”) which was seen by many as decadent, pornographic, and vulgar. Another author of the time, Jules Barbey d’Aurevilly, told Huysmans that after writing À rebours, he would have to choose between “the muzzle of a pistol or the foot of the Cross.” A year after publishing his Black Mass novel, Lá-bas, Huysmans returned to the Catholicism of his childhood. He died as a Benedictine oblate.

And so the truth remains, that even when the people or events seem completely bound up in evil and darkness and far away from God, the light of the Spirit can still break through and shine in the darkness. 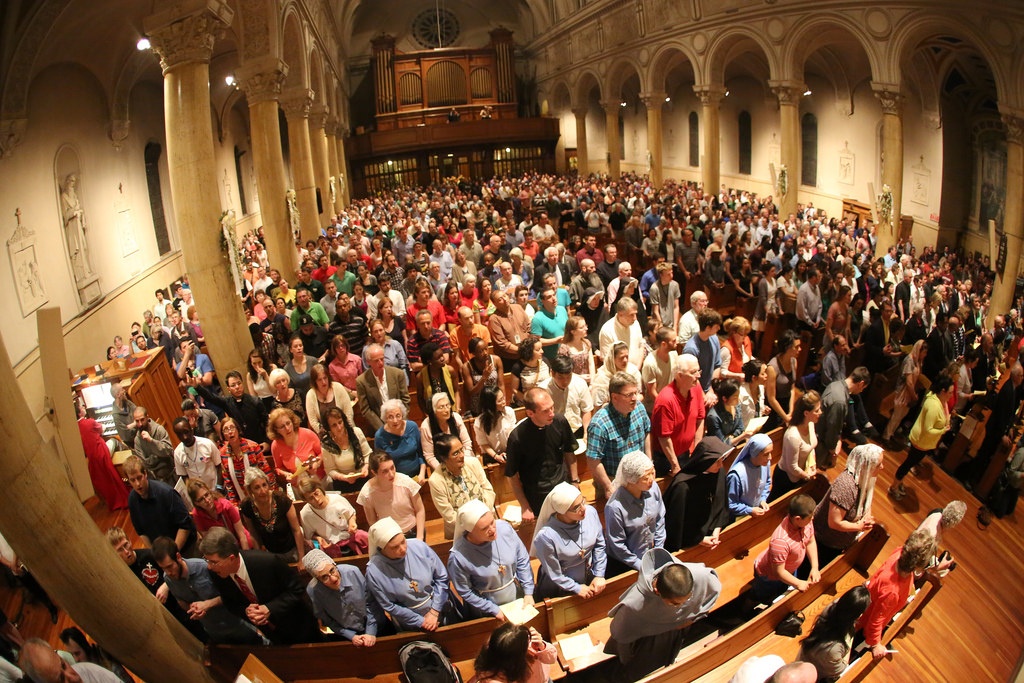 There is much to puzzle over in yesterday’s Black-Mass-That-Wasn’t-(Or-Was-It?) debacle. First we thought they were planning to use a consecrated Host; then they said they wouldn’t; then we thought they might after all. Then it was supposed to take place at Harvard; then it looked like it would be off campus; then it seemed like it didn’t happen; and now some people are saying it did happen, but it was just quiet. All in all, the story reminds me of one of those fairy tales where the dragon gets smaller and smaller until it becomes an insignificant lizard that scuttles away through a crack in the floor.

One puzzle remains, though, and that is this: why do so many Catholics feel uneasy about the way things went down? I’m hearing an awful lot of, “Well, it’s a victory, but . . . ” Here are a few objections I have been hearing, and here are my answers:

“So, what’s a sensible response from Catholics to what happened or didn’t happen at Harvard? How about a happy sigh of relief that there is so much sanity and decency left — and a prayer for the souls of the people who are playing such a dangerous game? Nobody went in with hobnailed boots to break some Satanist heads in the name of decency. Instead, the Holy One, blessed be He, was borne through the streets in a show of strength and courage, and the lizard shrank and scuttled away one more time. That’s what freedom looks like. We won this one, guys. It’s okay to be happy.” 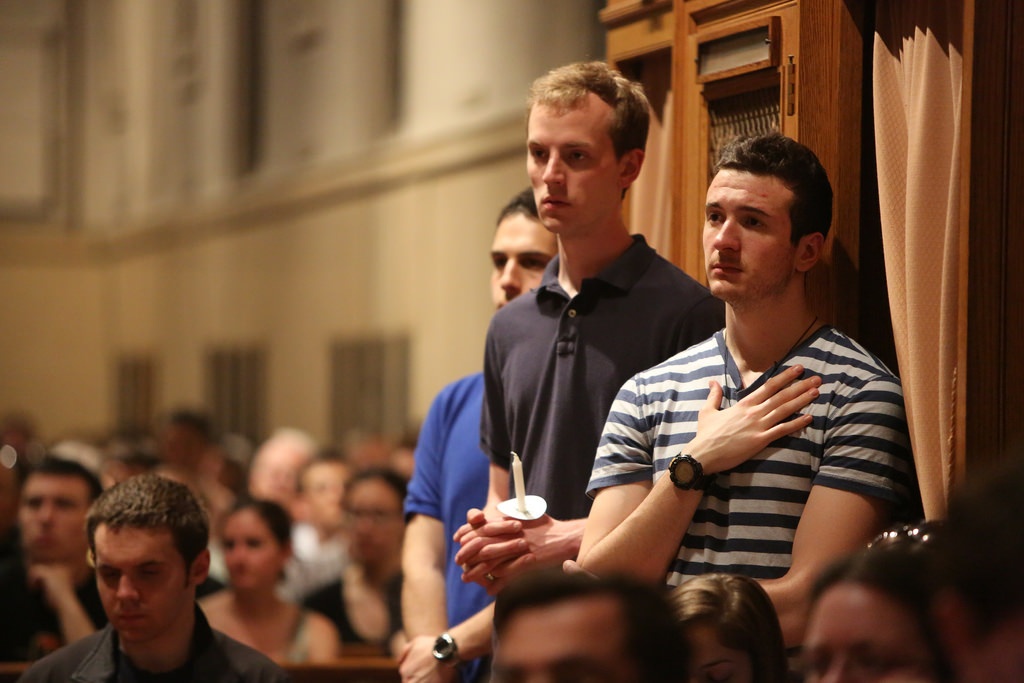 Father David Barnes, chaplain at Boston University, writes about his experience: A Beautiful Night to Be Catholic in the Archdiocese of Boston

The procession which passed MIT and Central Square was a site to behold. People were coming out of restaurants–some kneeling on the sidewalks, others blessing themselves, and some just staring in bewilderment.

and then ponders what we should take away from the experience for our daily lives The Harvard Eucharistic Procession Was Beautiful . . . But Now What?:

In this instance, the “big event” ought to cause all of us who are Catholic to become more coherent in our life. While we were rightly outraged at the intended sacrilege of the Eucharist by others, we ought to make certain that we do not simply become “protesters” in our relationship to the Eucharist. Instead, we ought to become more Eucharistic in our daily life. This “big event” ought to deepen our desire to grown in Eucharistic intimacy. We want to make sure that we ourselves are not sacrilegious, blasphemous, or careless.

Don’t miss the beautiful photos of the Eucharistic Procession through the streets of Cambridge and the Holy Hour for Reparation by George Martell of the Archdiocese of Boston.

On the Divine Office app Monday’s Evening Prayer began with a sung Psalm 23. This line jumped out at me this time: “You prepare a table before me in the presence of my enemies.”

Keeping in mind that our enemies are not the benighted wanna-be satanists, but the principalities and powers who seek to draw us all away from God. Still our God spreads his feast prodigally, inviting us to come and eat. Will we show up when we are invited to the feast?