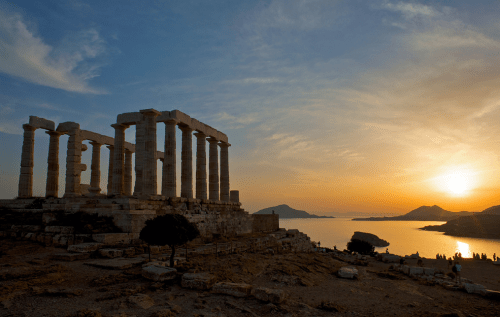 MacBeth shared this article on The Wine-Dark Sea’s Facebook page: Were the ancient Greeks and Romans colour blind?

I’ve read many articles about “the wine-dark sea.” As you might guess from my blog’s title, the phrase is a bit of a favorite of mine. This article has a slightly different take than any I’ve seen.

According to Mark Bradley, Associate Professor of Ancient History at the University of Nottingham, Gladstone observed, quite rightly, that colour operated in a very different way in antiquity from what we are used to today. ‘We have a great deal of difficulty in translating Homer’s colour terms into modern western languages,’ he says.

Gladstone noted that Homer actually uses very few colour terms, that black and white predominate, and that he uses the same colours to describe objects which look quite different.

‘He believed that although Homer represented the origins of western literature and had very sophisticated ideas about characterisation and tragedy and plot and genre, that in fact his colour vocabulary was comparable to that of a contemporary infant of about three years old,’ says Bradley.

This established the idea that Homeric Greeks had defective colour vision and that perhaps were colour blind en masse. It’s been a hotly debated scholarly topic for over a hundred years. Bradley says that one of the problems with what Gladstone and subsequent scholars did was to attempt to map ancient Greek colour terms onto how we understand colour. That is, the idea of a spectrum of abstract colours that we’ve inherited from Newton, where we can close our eyes and picture yellow and orange and red and blue.

I’ve shared other articles in the past that attempt to map the ways different cultures see color. A fascinating subject. (Drat, I can’t find the link now. I’ll post it if I can remember later.)

Bradley takes a different view. The important point for him is that Homer describes the sea as wine-dark following a tragedy. Odysseus mourns the death of his men after a shipwreck, when they’ve been swallowed up by the wine-dark sea. Achilles mourns the death of Patroclus looking out on the wine-dark sea. ‘The idea is that the sea is dangerous, it’s captivating, it’s intoxicating, just like wine’, he says. ‘It’s much more than just the colour, it’s more about what the object-metaphor is encouraging us to think about’.

I hadn’t tracked the pattern of when Homer uses the phrase an I found that fascinating. That it is associated with grief and Greek funeral rituals totally makes sense and fits neatly with my understanding of Homeric poetry. And seems kind of like it would obvious when you notice the pattern.

But I also found the whole discussion of color perception fascinating:

According to Bradley, the Greeks viewed chroma (in Latin color) as essentially the visible outermost shell of an object. So a table wouldn’t be brown, it was wood-coloured. A window would be glass-coloured. Hair would be hair-coloured, skin would be skin-coloured. ‘They wouldn’t talk in terms of the abstract colours that we are used to today.’

I think it’s interesting that he emphasizes the difference with colors being associated with the surface of things as so alien to the way we think of color, but it’s not at all alien to how little children perceive color, at least judging from my experience with my kiddos. I recall being very frustrated by not having colors to match skin and wood and such. Do we alter our perceptions to fit the tools we have to portray the world, gradually limiting our understanding of color to a box of Crayolas?

In fact even before I’d read this article, I’ve been wondering whether a huge part of the way we think of color isn’t due to crayons (and markers and colored pencils). I realized recently that I’ve always been baffled by the color indigo in the ROYGBIV schema. And I think that’s due in large part to the lack of an indigo colored crayon in my box growing up. I don’t really believe in indigo because I don’t really have a handle on what things are indigo colored. It isn’t a meaningful color for me. It describes nothing in my daily world.

But you don’t have to search far into the past or look to other cultures to find other examples of how we perceive color differently or at least name it differently. My mom and I have a long standing argument about the color purple. She refers to articles of clothing in her closet as purple that I would never call purple I think of them as a sort of wine-red, a dark claret or burgundy. And I have noticed at other times that something I will call blue another person will call purple and vice versa. Why is color so arbitrary, so difficult to pin down? And if my mom and I can’t agree, do I have any hope at all of understanding exactly what it was Homer saw when he looked at the sea?