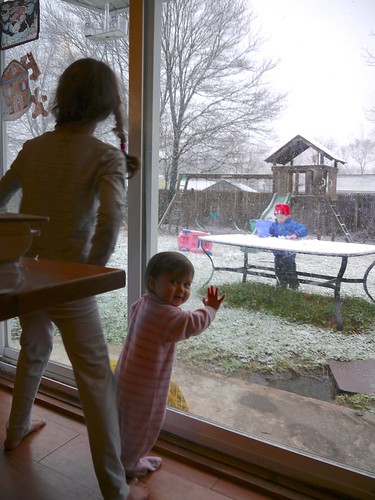 Lucia and Bella watche Ben playing in the snow

Blogging has been slow. And there’s no good reason except that by the time the kids are in bed I no longer feel like writing. 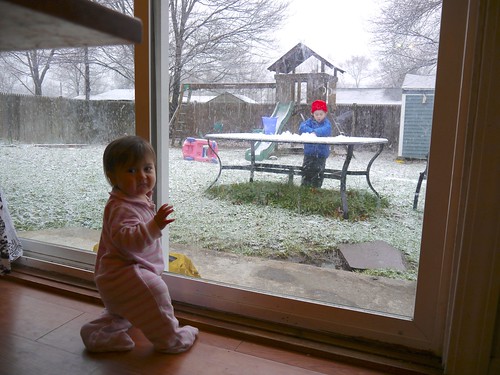 Or, as it’s gotten colder, I’ve been retreating to the office to huddle by the space heater with Dom. But he’s usually watching a show and I get sucked in. Even if I don’t get sucked in, I can’t really write with the noise. So I browse the web, read some blogs, articles, Facebook. And then by the time he goes to bed it’s getting late. My brain kicks into gear and I want to write all night, but if I do then I’ll have to pay for it tomorrow. No good options. 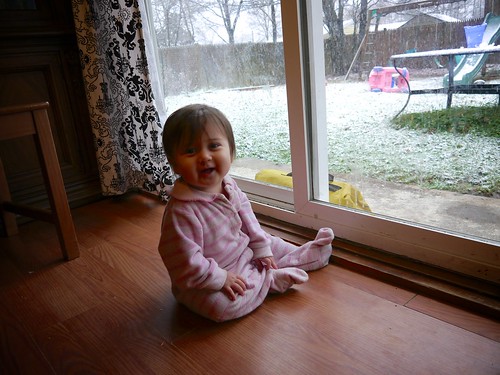 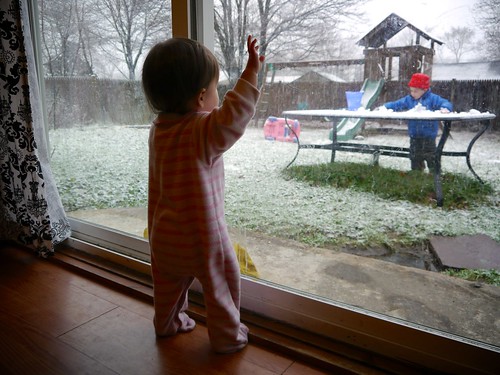 This is not the season in which I write books or essays. Or even write much on my blog. I get that. I want to write, but now isn’t the time. Sigh. 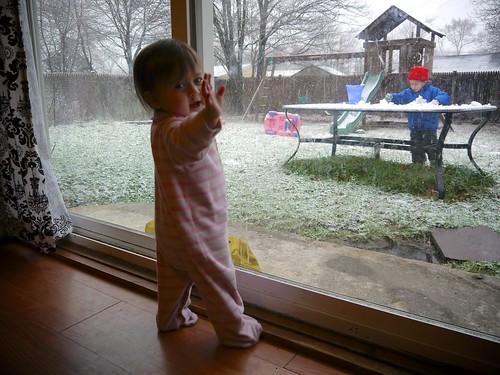 So I’m going to try to just write a few bits and pieces. Get back into the rhythm of recording the bits and pieces of our days. I feel rusty. I think I’ve forgetten how to do this. 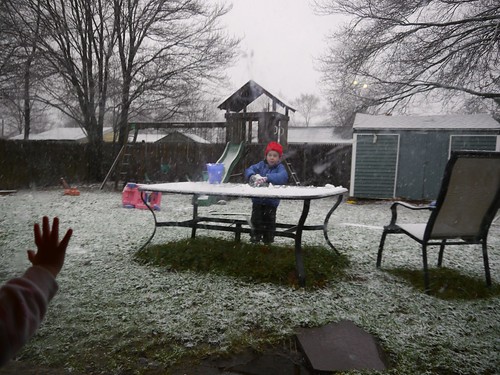 Lucy woke me up one morning and very clearly made the sign for more. When I asked her if she wanted more milk, she then very clearly said, “more milk” in her adorable little baby voice. She is quite the talker, always trying to imitate words and to communicate. When I understand what she means she claps her hands joyfully. 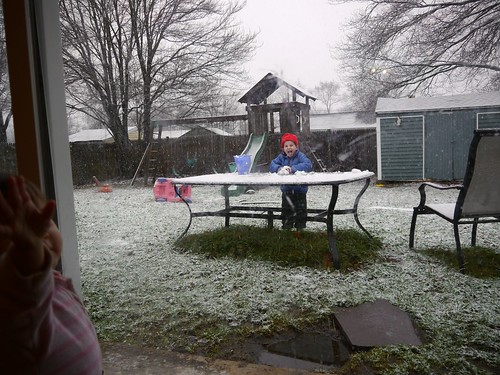 When I asked her this morning to say “mama” Lucy gave me a little smile and then said “dada.” Oh yes she did. 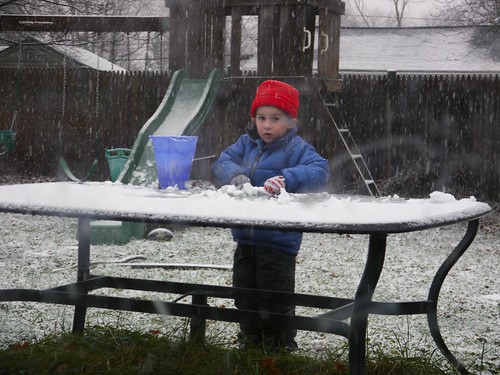 Lucy also likes to say Jesus. We make a little visit every night at bedtime, she pats my icon of Mary with the baby Jesus and looks up at my crucifix. She grins a huge happy smile and repeats after me, “zheeus.” 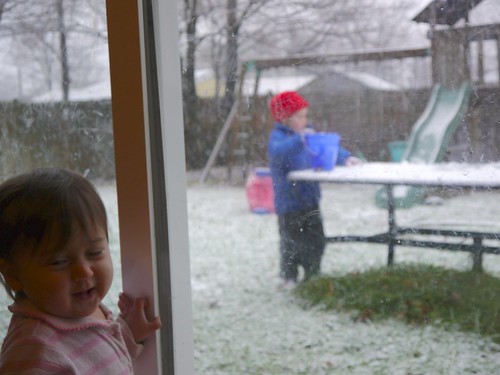 I took the kids for walk around the block the other day because I was getting cabin fever and Anthony wouldn’t go play in the snow but needs exercise and fresh air. Lucy fell asleep in the sling halfway round and was still asleep in her crib half an hour after we got home. she was well wrapped in a big fleece snuggy with a hat and her hood and my gloves in her hands. That’s actually how I like to sleep: snuggled warm with cold air on my face. Still, I had to laugh. She’s such a New England baby. 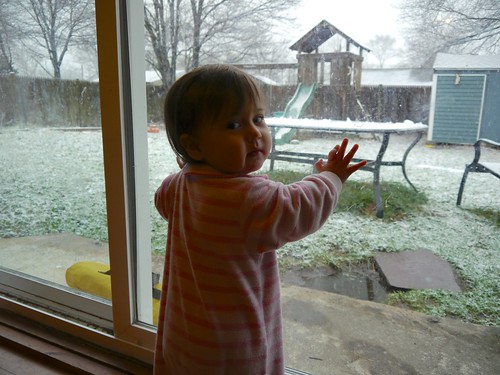 Mama, can I go outside?

I could go on about Lucy all day. I adore her so. And even when she’s teething she’s so sweet. Though when she’s sick it can be a pain because she just wants to be held. All. the. time. 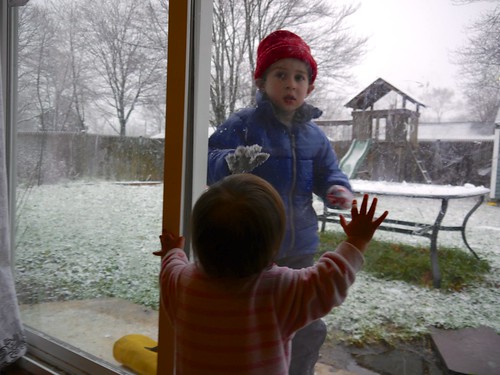 But of course Lucy isn’t the only one who wows me. On Saturday night Sophie read How Do Dinosaurs Say Good Night to me. With a bit of help from me, but she looked at and figured out every word. I had walked in on her telling the story to Ben and Anthony, but she was only pretending to read, reciting bits from memory and making up the rest. I challenged her: “You know those words. Read the words on the page.” I only meant her to read the words on the page she was on, but she flipped back to the beginning of the book and read the whole thing. It was terribly exciting, though I think I was more thrilled than she was. 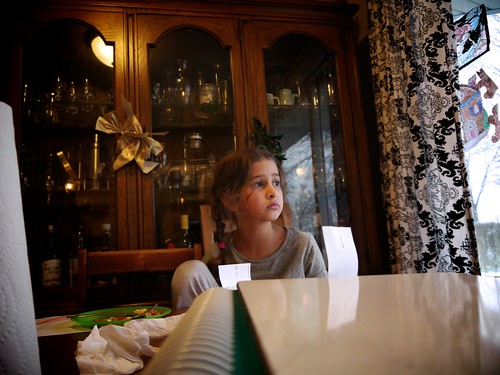 Though she looks sad, Bella doesn’t want to be outside. If she did, she’d be there. No, she’s thinking of a story.

Bella is in love with a particular track on my Advent playlist, a version of the canticle from Revelation sung by the Brotherhood of Hope: “Now have salvation and power come, the reign of our God and his anointed one. The accuser of our brothers is cast out. defeated by the blood of the Lamb.” We had an interesting chat about the meaning of the lyrics when I went to tuck the girls into bed tonight. 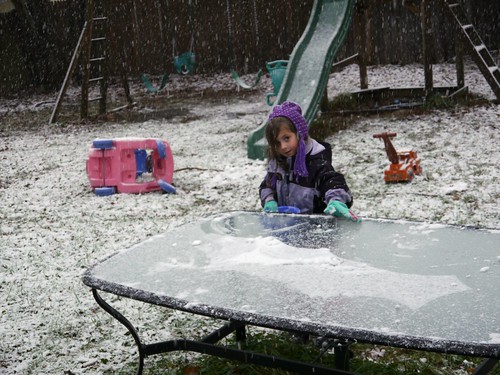 Sophie’s favorite Advent song is “People Look East.” I sing it to her every night at bedtime and we are slowly discussing the meaning of the various words. I often hear her pondering the idea that Jesus is love, that he is a guest and we are preparing our hearts for him. She’s really internalizing it, taking it to heart. We are pondering it together, contemplating.

And then oh how happy she was that it was the recessional at Mass this morning! 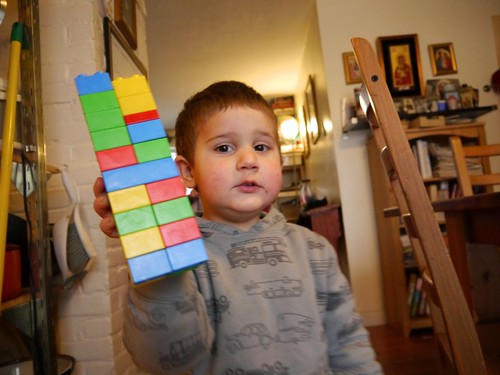 Anthony would rather stay in and build things. No snow for him. And that sweatshirt is his current favorite. He wears it seven days a week.

It was 10 degrees out when we went to get our tree on Saturday morning. My method of choosing a Christmas tree was to say yes to the first one Dom grabbed. I just wanted to get out of the cold. Especially because Lucy had fallen asleep in the car on the way and I didn’t want her to wake up in the cold. Her hat had fallen off and we’d forgotten to put a blanket on her legs. But she didn’t wake up and we did get a nice little tree.

We’d discussed the fact that I wanted a smallish one (he wants a bigger one than I do, always.) It’s not that I have anything against big trees. But we have a pretty small house and we have five rambunctious kids. So I figured getting a tree with a fairly small footprint just makes sense. But Dom still isn’t convinced that bigger isn’t better.

Anthony kept saying he wanted a blue tree. I keep hearing Elvis. I think he was trying to be funny. All the kids have recently discovered knock knock jokes (thanks, Dom). Their favorite is the interrupting cow. (Or chicken, or firetruck, or candle). Anthony just likes to say interrupting cow and then scream. Or just skip the joke altogether and just scream. Yeah, it’s going to be a long winter. I wish I could pay someone to take the boys to a place where they could run around and burn off energy while the girls and I did school work. 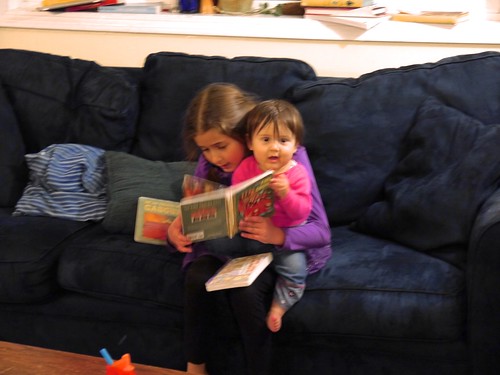 Finally Bella is getting old enough to be able to mind the baby for a little stretch so I can get something done. Now Bella has a very short attention span and is easily distracted. And sometimes she just doesn’t want to stop what she’s doing. But then there are moments like this where I just had to stop and get the camera even though I needed to get dinner made. 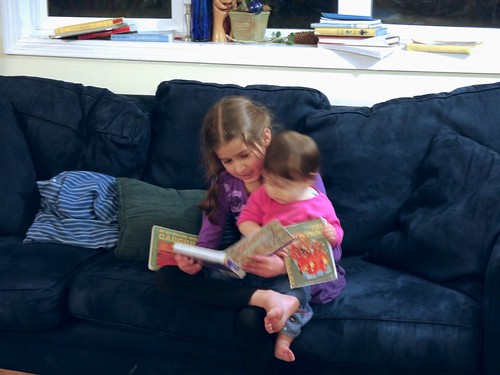 And Lucy adores Bella. She loves it when the big kids get down on the floor and roll her ball with her, when they pay attention only to her.