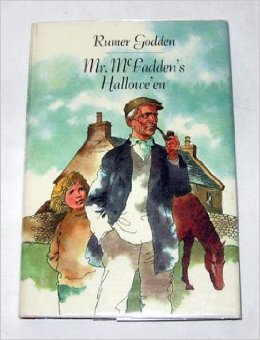 This year seemed like the time to introduce Bella to this Halloween themed novel by one of my favorite writers. (The only writer I can think of who is equally adept writing for children as for adults– I love both her children’s books and her novels equally.)

This is the story of a crotchety old Scottish farmer who is loved by no one until a couple of misfit children worm their way into his heart. The subject could so easily be overly sentimental, but Rumer Godden’s characters are delightful and Bella says the plot is unpredictable. Well I wouldn’t exactly say that, but this familiar storyline does feel fresh in Godden’s hands. No one changes overnight, rather changes happen gradually over time.

Selina is a dreamy child, a younger sister who is an unwelcome tag along to the much more down to earth Muffet. She chooses her pony, Haggis, precisely because he is a misfit too. It is Haggis, who for some reason insists on running off to Mr McFadden’s turnip patch, who forces Selina to become acquainted with Mr McFadden.

I’ve been thinking quite a bit about Enbrethiliel’s comment in this post about A Little Princess and fairy tales:

Which brings us to the question of why children need such stories at all–to which I say that childhood is the best time to learn that valuable skill of fear management. And one of the best ways to teach that is through cathartic literature: a well-written tale in which a child character is dealt a terrible hand but eventually manages to come out on top. First, following Aristotle’s model, the emotions are engaged through fear and pity. Then the imagination comes into play, as the young audience attempt the exercise of putting themselves in the characters’ shoes.

This is yet another novel in which the young characters (and old Mr McFadden as well) are dealt terrible hands and manage to come out on top. With Enbrethiliel ‘s comment rattling in my head I’ve been noticing how Bella manages her fear at the moments of crisis. (Usually by sprinting from one end of the living room to the other.) Though Godden is kind to her young readers and doesn’t make them wait too long for the resolution of the crisis.

I loved the glimpses into a traditional Scottish Halloween. It has definitely got my children even more excited about Halloween than last year, including giving them expanded vocabulary to describe the scary things they imagine on drives in the early dark of autumn evenings. “Spunkies!” I heard Bella exclaim tonight as we drove to dinner.

If you can get your hands on a copy, I highly recommend Godden’s Halloween novel. I think it’s going to become a part of our family’s regular Halloween tradition. I just wish I could do a convincing Scottish accent. I feel a bit foolish trying to read all the dialect and knowing I’m getting it all wrong.