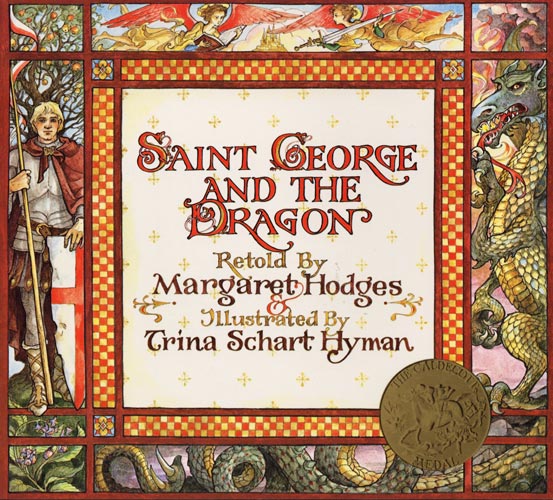 Saint George and the Dragon

by Margaret Hodges is really beloved by all of us, but Ben’s been asking for it quite a bit of late and that is a bit surprising since he’s had nightmares about dragons in the past. As I read it to him at bedtime last night it occurred to me that his desire to have it read to him was a perfect illustration of Chesterton’s adage:

Fairy tales, then, are not responsible for producing in children fear, or any of the shapes of fear; fairy tales do not give the child the idea of the evil or the ugly; that is in the child already, because it is in the world already. Fairy tales do not give the child his first idea of bogey. What fairy tales give the child is his first clear idea of the possible defeat of bogey. The baby has known the dragon intimately ever since he had an imagination. What the fairy tale provides for him is a St. George to kill the dragon. Exactly what the fairy tale does is this: it accustoms him for a series of clear pictures to the idea that these limitless terrors had a limit, that these shapeless enemies have enemies in the knights of God, that there is something in the universe more mystical than darkness, and stronger than strong fear.
from Tremendous Trifles (1909), XVII: “The Red Angel”

And I started to think how much I really love Margaret Hodges’s version of the St George story. It is delightful to read, the rhythm, the poetry of her prose, which I assume owes much of its magic to her source material, Spencer’s The Faerie Queen, which I confess I haven’t read. I especially love reading the battle scenes, they are so glorious, the words just sing, they feel good in my mouth, if you will.

And I love how it teaches not just that dragons can be defeated, but also the necessity of perseverance. George fights the dragon on three consecutive days. At the end of the first and second days he is defeated and falls down as if dead. Una falls to her knees and prays for him and a miraculous cure restores him. I love that though the dragon has almost killed him, George does not hesitate to immediately leap right back into the battle. I also love that he gives to the poor all the money the king gives him in gratitude for slaying the dragon and even admonishes the king never to forget the poor. I love that George further delays claiming his prize of the kingdom because he still owes service to the fairy queen. This book is rich in virtue as it is in language.

Finally, I really love the extended metaphor throughout the book of the sailor setting out, coming into harbor, and then setting forth again. This is not a book that talks down to children at all, rather it assumes that the poetry itself will speak to them, even if they don’t understand all the words. And it’s true. Ben and Anthony love it.

And then there are the absolutely gorgeous illustrations by Trina Schartt Hyman, who is hands down one of my favorite illustrators. They are so rich in detail, and really just perfect. This is one of the most terrifying dragons I’ve seen. So often I’m disappointed in artists attempts to portray dragons, but this one is lovely. And can I tell you how much I adore the beautiful illuminated borders. Yeah, I think this would be on my personal top ten most beautiful picture books list.