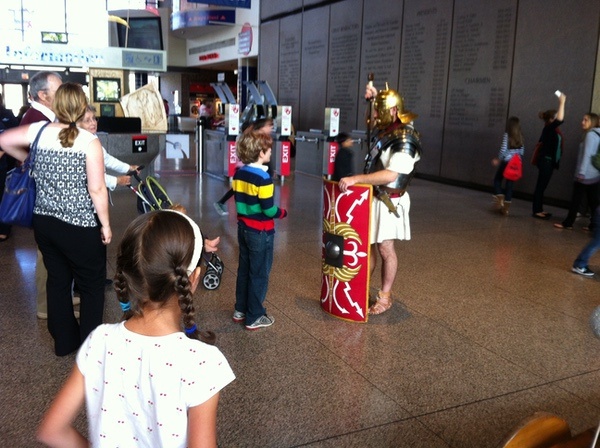 October is archaeology month in Massachusetts. There were so many activities on the calendar that looked like fun. Some of them we missed because we were sick. Others were just logistically too difficult, too far away, wrong time of day. Fortunately the one event that topped Bella’s list and mine was the archaeology fair at the Museum of Science. Perfect for us since our family decided to get a MoS membership for the year. We brought our lunch and so the only expense was the gas and the (discounted) parking.

This was even better than I thought it would be. The first thing we saw were a couple of Roman legionaries in full armor. Oh yeah. Absolutely perfect as we are still finishing up our studies on Ancient Rome. 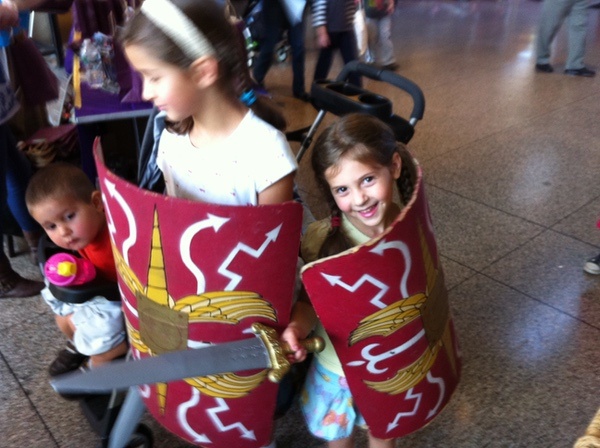 They had a catapult and a big crossbow. And lots of armor. A whole basket full of child-size shields and swords. And even a child sized chain mail tunic and helmet. The reenactor we talked to said they were his son’s. And he was so very enthusiastic and helpful and informative and absolutely wonderful with the kids. 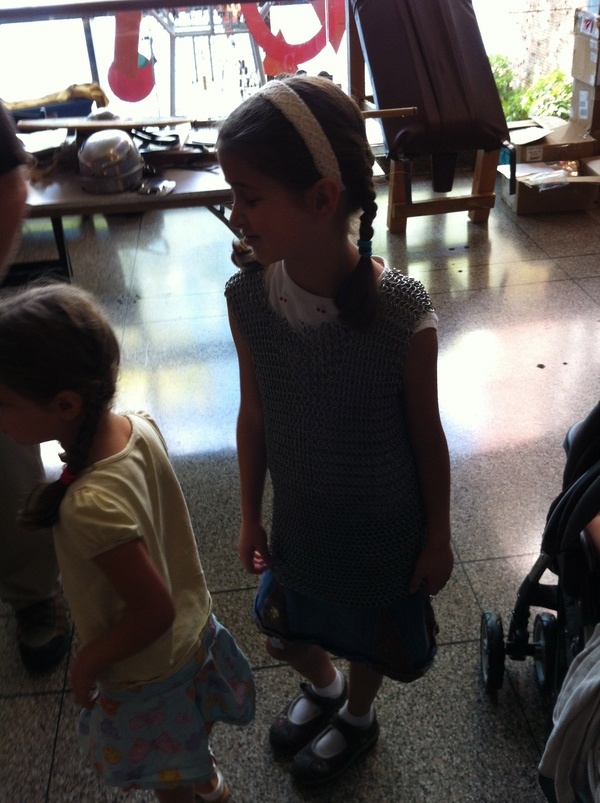 Bella and Sophie were in heaven. Poor Ben would have been, but he was too shy to do more than hold the sword while sitting in the stroller. He wouldn’t hold the shield or try on the helmet or chain mail.

Yeah, I didn’t even realize that the Romans had chain mail. Evidently they got it from the Celtic Gauls as early as the first century BC, before the time of Augustus and Julius Caesar. We talked about the development of the shields and the helmet. I definitely want to look these guys up again. How fun would it be to go to one of their encampments? 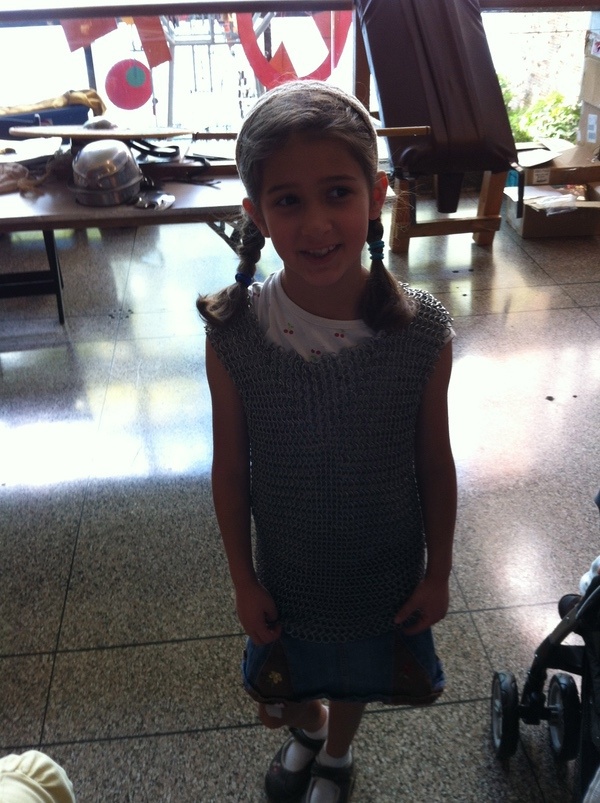 Next we visited with a couple of rangers from the Bunker Hill Memorial. They had two big bins of sand with artifacts from the monument hidden in layers. Bella, Sophie, and Ben uncovered bottle caps, plastic and metal, a pen cap, coins, Revolutionary War era buttons, a musketball or maybe it was actually grapeshot, a small granite piece of the Bunker Hill monument itself and four thousand year old arrowhead. The rangers were awesome, telling them about each artifact. I loved watching Bella digging so carefully with her trowel, obviously having taken in the lesson that archaeologists excavate very slowly moving only a little dirt at a time.

When I mentioned that she conducted digs in our backyard, he told me that the US is the one country in the world where you can actually keep artifacts you find in your yard. He said we don’t follow English Common Law in this case because the British law was enacted in 1774, at a time when the colonists weren’t really all that interested in being told what they couldn’t do by the British. And when Sophie complained that she hadn’t found much, he also told us about how he once spent six months digging in a field and only found one artifact the whole time. 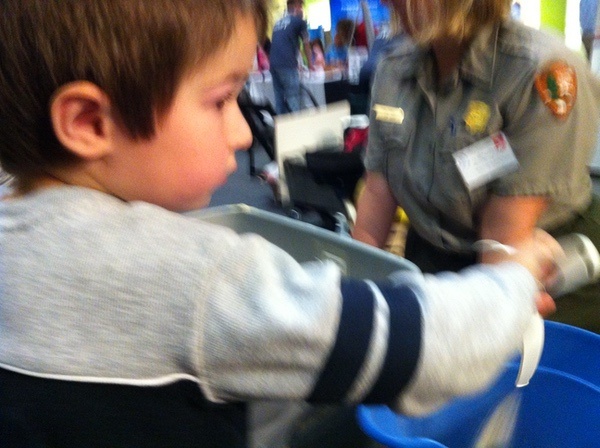 I was kind of surprised Anthony didn’t join in as digging is one of his favorite activities. I guess he was too overwhelmed by all the people.

Bella and Sophie also assembled some broken pottery (at the Plimouth Plantation booth) and identified objects found in a mock shipwreck (not sure who the group that organized that was). There were many more tables we didn’t get to visit, but that’s life when you visit a museum with a baby and toddler. 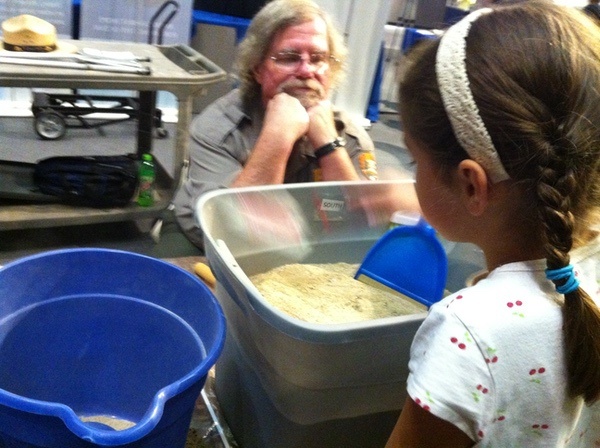 We had our picnic lunch in the parking garage because I didn’t want to carry our big lunch bag through the museum. We had a nice view of the Charles River to stare at and it worked out pretty well even if Ben and Anthony did shove grapes in between the top of front seat and the headrest. 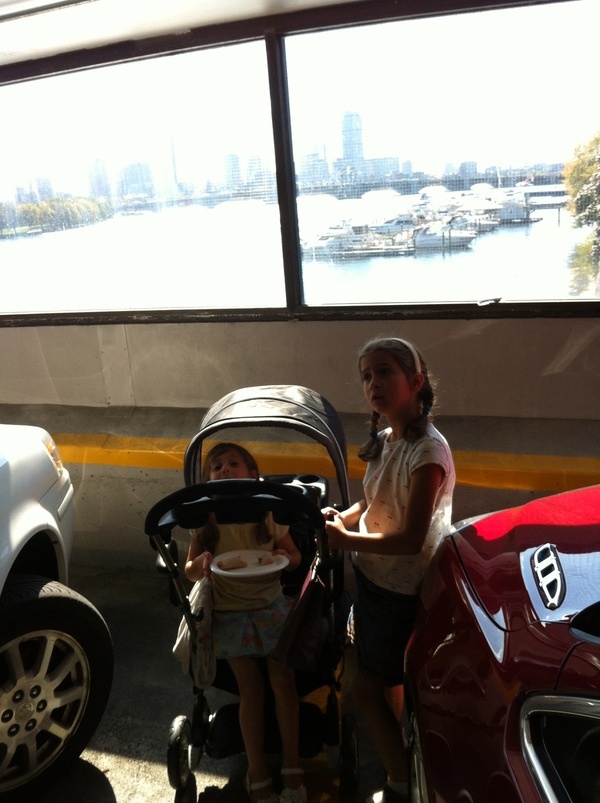 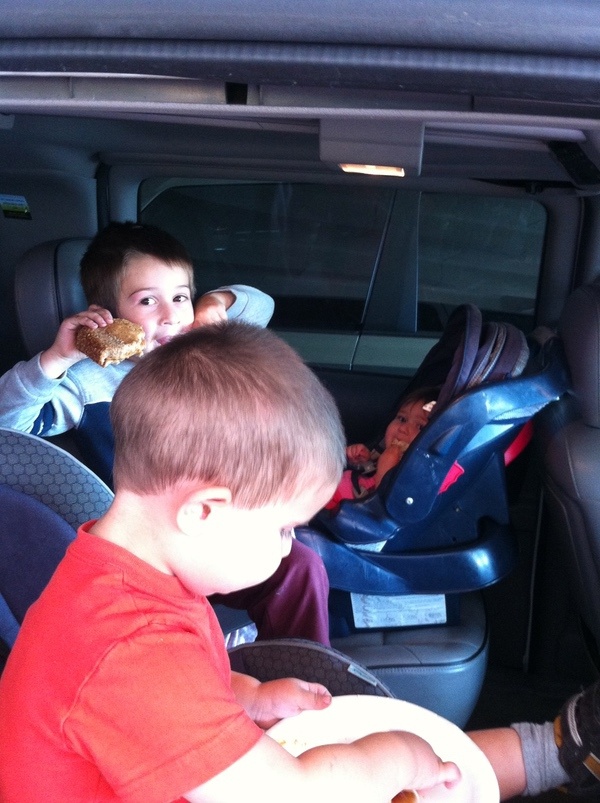 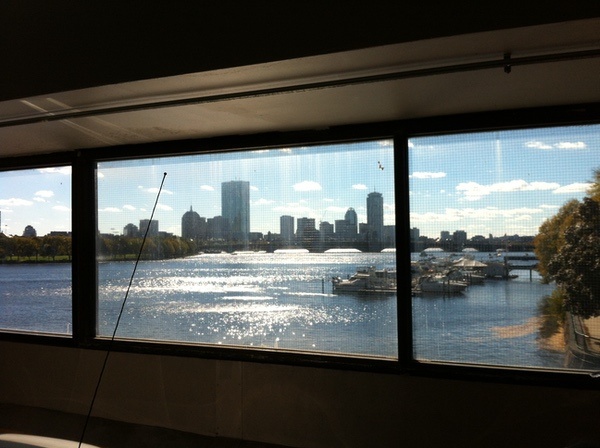 On the way to the car for our lunch break we passed by a glass blowing exhibition. Oh that was super cool. 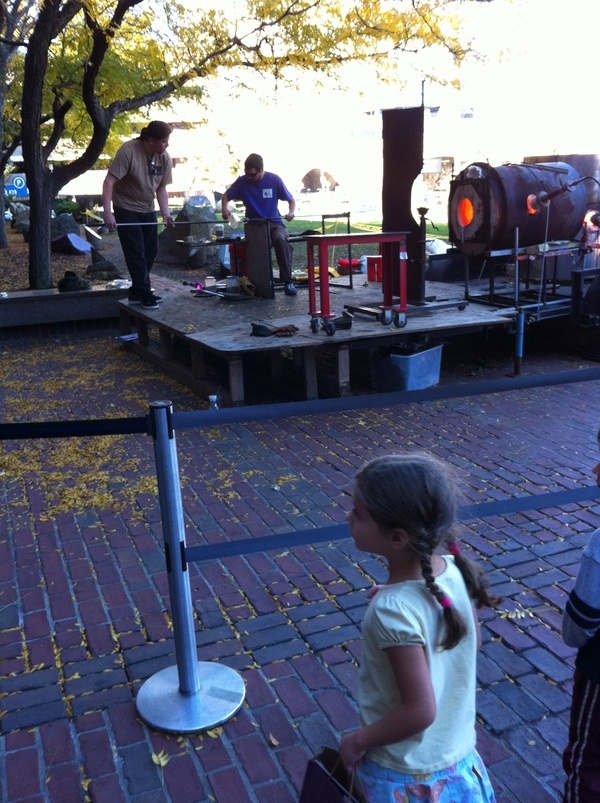 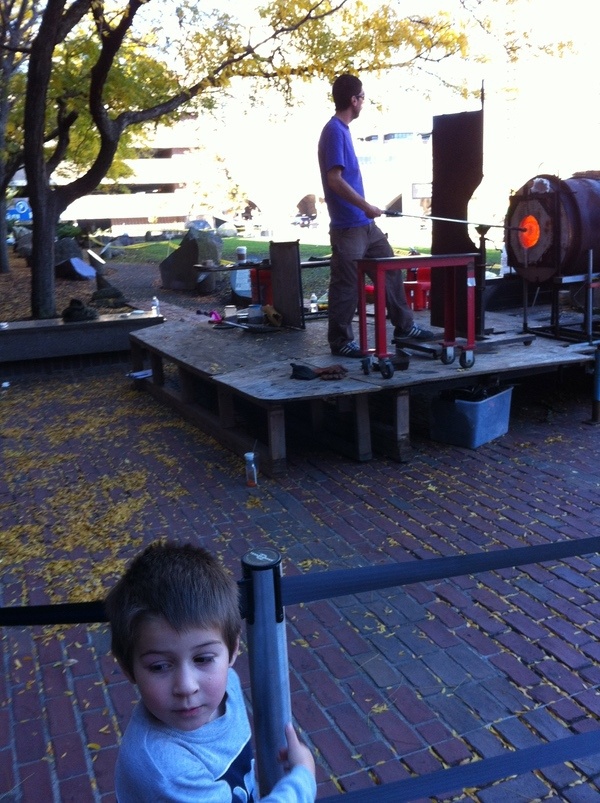 After lunch we went to see T-Rex, because we couldn’t not pay him a visit. We wandered back through some of the exhibits they wished they’d spent more time looking at on our last visit. We could spend hours just in the small area devoted to learning about classification and collections.

One cool moment actually occurred when we took our bathroom break. A teenaged girl paused as she was leaving the bathroom and gave me a huge smile as I bent over changing Lucy’s diaper. She said she was one of seven and our family reminded her of her own. She just seemed kind of happy to see another big family. She said she was number three, the youngest of the big kids.

I had been a little afraid of taking all five kids on my own. I always schedule museum days for when Dom can come with us or when one of my parents is in town. And I was a bit concerned that all the activities would be geared towards slightly older kids and that we might run into the same kind of attitude we got from the Egypt lady who did the presentation at the library. But everyone was absolutely wonderful and took my young crew in stride. No one was condescending in the least but they talked even to Ben as if he were quite capable of understanding what they had to say. Some of it was surely over his head, but I’m positive he appreciated being treated like one of the big kids.

And perhaps the best moment happened when one of the volunteers from the Archaeological Institute of America stepped up magnificently to fix what might otherwise have been the worst. All the kids had received little goody bags. They had stickers and buttons and copies of their Archaeology Magazine. Not what I would have thought of as super exciting for kids, but even Anthony wanted a bag and they were nice enough to give us four so everyone could have their own. But somehow near the end of the afternoon Sophie put her bag down somewhere and we couldn’t find it. Maybe someone else picked it up by mistake. Anyway as we were leaving I stopped by the table to ask if they might possibly have another bag leftover, knowing it was a long shot. The lady apologized and said they’d already been sent down to overnight storage. But… if I gave her our address she would send a box to Sophie with some goodies in it. Wasn’t that absolutely amazingly wonderful?