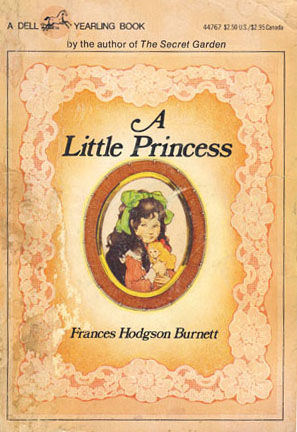 Copious tears shed this afternoon. We read the chapter in A Little Princess

when Sara learns her father has died and left her a penniless orphan without a friend or relative in the world. And then we had a long discussion about why things are sad and why books can make us cry.

Bella sobs and sobs as if her heart is breaking. She needed many tissues. At one point she had a terrible coughing fit. “Is it real?” she asked, “Is he really dead?” Sophie is more philosophical, pondering and wondering. No tears, just questions. She’s puzzled by Bella’s strong reaction. I don’t think Sophie is really cold, though she is less sensitive than Bella in some ways. But I’m not sure how well Sophie is following the story, her attention wanders at times, sometimes she’s giggling with Ben or playing she isn’t rapt like Bella. So maybe she’s just not quite getting it.

When Bella started sobbing I felt almost cruel. And wondered if I should have suggested the book, no matter that it’s my favorite. I know she’ll survive, but oh the pity of it, those sobs.

And Bella says something about the poor ones being the good ones. And quotes the Beatitudes: Blessed are the poor in spirit and blessed are those who mourn. Oh she’s thinking deeply she is.

Bella also said something about how the death of Sara’s father is like the death of Aslan. And Bella is already consoling herself, knowing that the story will go on and get better.

I was thinking about this death and Aslan’s. It is a sort of crucifixion. Sara’s loss of her father is a moment at the foot of the cross complete with mockery and disdain from the unkind Miss Minchin.

And then I’ve been discussing the book on Facebook with a friend who saw the movie first then read the book. She liked the movie ending better. Sara reunited with her father who, it turns out, isn’t really dead after all. And of course I prefer the book, I was in love with the book long before I saw the movie. But I wonder if the book had been written that way if it would have become my favorite.

Is it precisely because of the loss of her father that this is one of my favorites? Sara’s story has become such a part of who I am, how I see the world. but would I have loved it had it been one of those stories where everything turns out all right in the end after all? I’m not sure. It often seems that my favorite stories are the ones that acknowledge the brokenness of this world, that this is a vale of tears, that some hurts aren’t, won’t, can’t be magically healed. Some losses aren’t made up this side of heaven. And this book was one of my first introductions to that deep truth.

I think it has made me more resilient, living this story over and over, sobbing in my room in the middle of the night over the sadness of it all. I think some of the strength I got from Sara is the strength that carried me through my miscarriage. This life is a vale of tears and we are all called to bear our crosses gracefully and with dignity. And death is a parting, a sadness. And even Jesus wept when confronted with the body of his dead friend Lazarus and his grieving sisters. And Sara does carry her cross so beautifully. Yes, it is a lesser consolation when she finds a new home, a new adopted family. It is less perfect than getting her father back. And yet I also see it as a greater story in a way, a story about love and the need to take in the orphan, to give not only physical shelter and food, but also to fulfill the needs of the orphan’s heart: the need for love. I felt like the Hollywood ending kind of missed the point of the original story, it’s a cheaper feel-good moment that doesn’t have the bittersweet and thus to me it feels phony. It doesn’t trust the audience to be happy for Sara in her adopted place. Funny, I think most of my favorite heroines are orphans.

For me one of the big points of the story is that we can still find happiness even after a loss. Even when those we love are taken away, life goes on. We can find other loves, we can make a life. It doesn’t mean the hole left by the beloved person’s death ever goes away, but it is possible to be a whole person even when you are an orphan.

It is true that Sara manages to be dignified in all circumstances, to be just as graceful and generous and selfless as a poor beggar as she was when a rich heiress. Still, to me it’s not just Sara’s dignity that makes her a great heroine, it’s also her resilience. And yes somehow it always mattered to me that she didn’t get her father back. Just as Hans Christian Anderson’s Little Mermaid doesn’t get the prince or get to return to her life in the sea. Some losses are true losses and no amount of storybook magic can undo them. And that’s ok. It’s ok to be sad because Sara’s father died far away in India and she never got to see him again. I was so mad when I saw the movie because it was as if they were saying that it wasn’t ok. That it’s not ok that she found peace after he died. It felt like such a lie. It is a lie. Because this world is full of orphans none of whom are going to have their parents reappear at the end of the movie.

Anyway, maybe when we finish the novel I’ll ask Bella if she thinks it would be better with the movie ending.