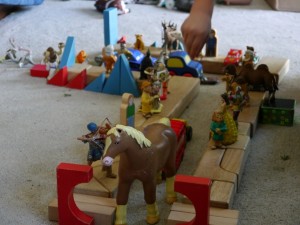 “It’s interesting to me that when we talk about play today, the first thing that comes to mind are toys,” says Chudacoff. “Whereas when I would think of play in the 19th century, I would think of activity rather than an object.”

It turns out that all that time spent playing make-believe actually helped children develop a critical cognitive skill called executive function. Executive function has a number of different elements, but a central one is the ability to self-regulate. Kids with good self-regulation are able to control their emotions and behavior, resist impulses, and exert self-control and discipline.

Despite the evidence of the benefits of imaginative play, however, even in the context of preschool young children’s play is in decline. According to Yale psychological researcher Dorothy Singer, teachers and school administrators just don’t see the value.

“Because of the testing, and the emphasis now that you have to really pass these tests, teachers are starting earlier and earlier to drill the kids in their basic fundamentals. Play is viewed as unnecessary, a waste of time,” Singer says. “I have so many articles that have documented the shortening of free play for children, where the teachers in these schools are using the time for cognitive skills.”

It seems that in the rush to give children every advantage — to protect them, to stimulate them, to enrich them — our culture has unwittingly compromised one of the activities that helped children most. All that wasted time was not such a waste after all.

“It’s the idea about how to bring affordable nutrition to the underserved in our cities. It basically tries to utilize this 40 percent of this food that is wasted. This is, to a large degree, either excess, overstocked, wholesome food that’s thrown out by grocers, etc. … at the end of the day because of the sell-by dates. Or [it’s from] growers that have product that’s nutritionally sound, perfectly good, but cosmetically blemished or not quite up for prime time. [So we] bring this food down into a retail environment where it can become affordable nutrition.”

“Yeah, it’s kind of a hybrid between a grocery store and a restaurant, if you would, because primarily it’s going to take this food in, prep it, cook it [for] what I call speed-scratch cooking. But the idea is to offer this at prices that compete with fast food.”

“But most of what we’ll be selling will be fruits and vegetables, freshly prepared product, stuff that’s really not brand-driven. And [we’ll be doing it] in areas that, frankly, are underserved. There aren’t Trader Joe’s in the inner-cities in America, at least to my knowledge.

This is about trying to tackle a very large social challenge we have that is going to create a health care tsunami in cost if we don’t do something about it. I don’t regard Daily Table as the only solution — there are wonderful innovative ideas out there — but I certainly think it is part of and is an innovative approach to trying to find our way to a solution.”

3. No Thank You, We Don’t Believe in Socialization!

The first time I heard the word, I was attending a Catholic day school as a first grader.

Having been a “reader” for almost 2 years, I found the phonics and reading lessons to be incredibly boring. Luckily the girl behind me felt the same way, and when we were done with our silly little worksheets, we would chat back and forth. I’ve never known two 6 yr. olds who could maintain a quiet conversation, so naturally a ruler-carrying nun interrupted us with a few strong raps on our desk. We were both asked to stay in at recess, and sit quietly in our desks for the entire 25 minutes, because “We are not here to socialize, young ladies.”

Those words were repeated over and over throughout my education, by just about every teacher I’ve ever had. If we’re not there to socialize, then why were we there? I learned to read at home. If I finished my work early (which I always did,) could I have gone home? If I were already familiar with the subject matter, would I have been excused from class that day? If schools weren’t made for socializing, then why on earth would anyone assume that homeschoolers were missing out?

On a recent visit to an Art Gallery, we noticed a man walking back and forth, carrying framed artwork from his old pickup truck. I asked my 6 yr. old if she thought he might be the artist. We both agreed that was a possibility, and after a little pep-talk to overcome her stage fright, she approached him and asked. He was the artist, and he was bringing in his work to be evaluated by the curator. We all sat down and he explained some of his techniques and listened to her opinions about which piece she liked best. He told about how he enjoyed art when he was 6 and would “sell” pictures to family and friends. He recounted how he felt while creating a few of the pieces, and how each one has special meaning to him. He even let her know how nervous he was to show them to the curator and how he hoped she found them as interesting as we did. As he was called into the office, a group of thirty-four 3rd graders filed past, ever so quietly, while their teacher explained each piece on the walls. The children were so quiet and well behaved. They didn’t seem to mind moving on from one picture to the next (The problem with homeschoolers is they tend to linger on things they enjoy). They didn’t seem to have any questions or comments (Maybe they’ll discuss that later in class). And they never got a chance to meet the gentleman in the pickup truck.

This thoughtful essay about balancing career and motherhood.

Both the ethical imperatives I’ve described—“must work” and “must stay at home”—reflect noble desires, the one for talents fully used and the other for the vocation of motherhood. But I worry that both are too often promoted ideologically, prescribed as answers to the anxieties young women naturally feel about what they should do. This problem is especially pressing for those high-achieving college students I have been describing, who cannot imagine doing anything—be it career or motherhood—halfheartedly.

It’s the tacit denial of the tragedy of the human condition that I’ve come to resent in the contemporary literature about “balancing” career and family. This literature is full of demands for Justice and Equality, its authors motivated by ideas of social perfection: to finally place a sufficient number of women in the ranks of management and government and to effect true gender equality in the workplace as a whole. Engaged on a quest to change the world, they write with a fervor generated by a political ideal and employ the language of political advocacy, as if the divided desires of our souls can be unified by Reform and Revolution. There is a solution for everything, they imply; we just haven’t found it yet.

But this simply isn’t so. I know from personal experience that this conflict in the soul does not go away, no matter how pleasant and accommodating our colleagues may be, or how flexible our schedules. We are limited, embodied creatures. These limits mean that we cannot do everything to its fullest extent at once, and certain things we may not be able to do at all. The tragic aspect of this is that both excellence and nurture are real, vital goods and that the full pursuit of one often, and perhaps inevitably, forecloses fully pursuing the other.