In the Watches of the Night
5 comments
Share:FacebookTwitter
books

In the Watches of the Night 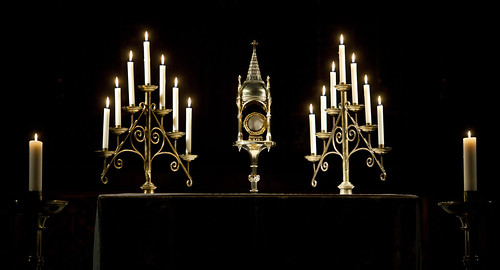 We used to sleep in two shorter periods, over a longer range of night. This range was about 12 hours long, and began with a sleep of three to four hours, wakefulness of two to three hours, then sleep again until morning.

References are scattered throughout literature, court documents, personal papers, and the ephemera of the past. What is surprising is not that people slept in two sessions, but that the concept was so incredibly common. Two-piece sleeping was the standard, accepted way to sleep.

“It’s not just the number of references – it is the way they refer to it, as if it was common knowledge,” Ekirch says.

I’d heard a bit about this before, that it used to be common for people to sleep in two block with a period of wakefulness in the middle of the night. I’m really fascinated by the idea and especially in it’s implications in the prayer of the Church. This makes sense of what the oddity that the longest office of the liturgy of the hours is the prayer of the mid-night hour. I always wondered about that, but this sleep pattern actually makes more sense of that. If you’re going to be up for several hours in the middle of the night, you might as well use that time to pray. All the articles I read suggested that was a common use in the historical sources cited.

Also, Psalm 63 seems to reference this middle of the night wakefulness: “On my bed I remember you; I think of you through the watches of the night.”

and Psalm 134: “Lift up your hands to the holy place and bless the Lord through the night.”

Though I wonder whether the pattern existed at the equator or was a European thing and also whether it might have been more pronounced in winter than in summer or maybe even disappeared altogether in summer when the days are long but the nights short.

Other articles that discuss the idea of the two-part sleep:

From the NY Times, a piece that focuses on rethinking what sleep patterns are beneficial, highlighting the benefit of strategic naps

Gradual acceptance of the notion that sequential sleep hours are not essential for high-level job performance has led to increased workplace tolerance for napping and other alternate daily schedules.

Employees at Google, for instance, are offered the chance to nap at work because the company believes it may increase productivity. Thomas Balkin, the head of the department of behavioral biology at the Walter Reed Army Institute of Research, imagines a near future in which military commanders can know how much total sleep an individual soldier has had over a 24-hour time frame thanks to wristwatch-size sleep monitors. After consulting computer models that predict how decision-making abilities decline with fatigue, a soldier could then be ordered to take a nap to prepare for an approaching mission. The cognitive benefit of a nap could last anywhere from one to three hours, depending on what stage of sleep a person reaches before awakening.

Most of us are not fortunate enough to work in office environments that permit, much less smile upon, on-the-job napping. But there are increasing suggestions that greater tolerance for altered sleep schedules might be in our collective interest. Researchers have observed, for example, that long-haul pilots who sleep during flights perform better when maneuvering aircraft through the critical stages of descent and landing.

Several Major League Baseball teams have adapted to the demands of a long season by changing their sleep patterns. Fernando Montes, the former strength and conditioning coach for the Texas Rangers, counseled his players to fall asleep with the curtains in their hotel rooms open so that they would naturally wake up at sunrise no matter what time zone they were in — even if it meant cutting into an eight-hour sleeping block. Once they arrived at the ballpark, Montes would set up a quiet area where they could sleep before the game. Players said that, thanks to this schedule, they felt great both physically and mentally over the long haul.

Strategic napping in the Rangers style could benefit us all. No one argues that sleep is not essential. But freeing ourselves from needlessly rigid and quite possibly outdated ideas about what constitutes a good night’s sleep might help put many of us to rest, in a healthy and productive, if not eight-hour long, block.

And fom the BBC News Magazine: The myth of the eight-hour sleep

Today, most people seem to have adapted quite well to the eight-hour sleep, but Ekirch believes many sleeping problems may have roots in the human body’s natural preference for segmented sleep as well as the ubiquity of artificial light.

This could be the root of a condition called sleep maintenance insomnia, where people wake during the night and have trouble getting back to sleep, he suggests.

The condition first appears in literature at the end of the 19th Century, at the same time as accounts of segmented sleep disappear.
“For most of evolution we slept a certain way,” says sleep psychologist Gregg Jacobs. “Waking up during the night is part of normal human physiology.”

The idea that we must sleep in a consolidated block could be damaging, he says, if it makes people who wake up at night anxious, as this anxiety can itself prohibit sleeps and is likely to seep into waking life too.

Russell Foster, a professor of circadian [body clock] neuroscience at Oxford, shares this point of view.

“Many people wake up at night and panic,” he says. “I tell them that what they are experiencing is a throwback to the bi-modal sleep pattern.”

I think I might have to check out the book cited in the article: At Day’s Close: Night in Times Past

by A. Roger Ekirch. Oh yes, it’s going on my library queue.