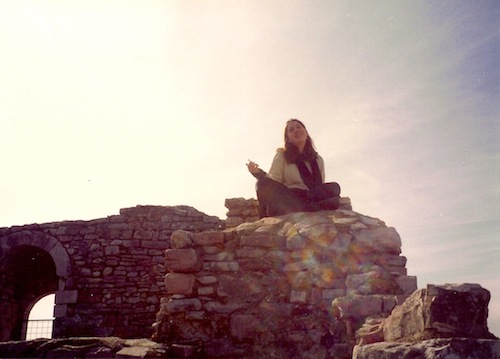 Stephanie in Assisi, on top of Rocca Maggiore, spring semester 1994.

I was digging through some old boxes today, looking for a particular photograph, and I found some of my old journals. One flipped open and I read the first page. It was a poem that I had no memory of writing.

I used to write a lot of poetry back in my high school and college days and I’d long ago dismissed it as probably angsty and silly and better forgotten. But this poem surprised me. It had some promise. Some of the phrases struck me as rather nice, actually. I started flipping through the notebook and found many things I had no memory of writing.

Looking at the phone numbers scrawled on the notebook’s cover and the papers stuffed inside (among them an old phone bill) as well as at the contents, I think this journal was from 1998 or 1999 when I was still living and working in the Dallas area (having graduated from college in 1996). I thought I’d have fun and transcribe some of the pieces that seem worth keeping and since I’m doing the work of typing them in, why not share them with the world. It struck me that had blogs existed back in 1998 all this stuff would probably have made it to the blog anyway. Maybe. I think of my journals as a sort of proto-blogging. My first blog after all was just a digital form of my notebooks, kept on LiveJournal. I’ve evolved as a blogger, and as a writer. What if my blog’s archives reached all the way back to 1998, though? This kind of thing would be out there.

I mostly gave up writing poetry in grad school when I became too self-conscious and thought that something wasn’t worth doing unless it was going somewhere. Now I find that rather silly. I have come to enjoy writing for its own sake and not for the dream of one day being a famous writer. So maybe typing these in will help me to remember that poem writing self?

This first untitled poem is a little sketch of my best friend in college, Stephanie. She and I were so close people called us by each other’s names. Now we live on opposite coasts and see each other rarely. The second poem is a funny little thing, also about Stephanie. I believe written after I’d visited her in San Francisco. I hope she forgives me for the portrait.

About your thumb the pen flickered
and flipped—too fast for eye to follow
(much less my fumble fingers grasp the trick).
An unconscious extension of your
wandering thoughts, perhaps, a snake’s
tongue testing the flavor of the air.

And above,
the blue calm of your eyes like
wide newborn skies serene
agaze upon a lost landscape
of childhood’s perfection that never was.

And then your cigarette sketched
smoky signals
as we pulled between us
the hypothetical question of love,
a tangled sheet we never managed
to sort into satisfactory folds.
It almost became our death shroud.

The closet was your favorite stage
and I can still see you among those hangings
acting out your daily drama
as you pose in bra and underwear
with clothes hanging in both hands.
An allegory of frustrated Justice
with fashion hanging in the balance.
Or the Last Judgement.
What fiery pits wait to swallow
the unfortunate skirt
that fails to flatter your hips,
the sweater that overemphasizes
the wrong syllables of your body
with an awkward lift on the end
of the phrase
and a thick Italian accent?

And the voice under the window
I had to let a stranger in, perform for you as host
because you could not stop floundering
between a brown velour or orange tee
and did these stockings match this
brown check suit?
(I thought it all so outre but nodded,
smiled, reassured—anything to let the
night begin.)