Make a Little Birdhouse in Your Soul
5 comments
Share:FacebookTwitter
Uncategorized

Make a Little Birdhouse in Your Soul 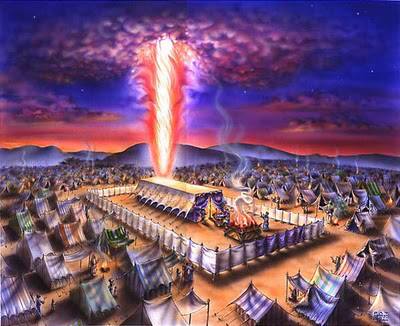 Moses Sets up the Tabernacle

So this morning at Mass we had a visiting priest and a rather lackluster homily. He talked about today’s Gospel about the rich man who builds new barns to hold his overabundant harvest and then dies the next day. The message was that hoarding wealth is wrong but that having possessions is not a bad thing in itself. And then he mentioned how the Bill Gates Foundation does a lot of good—bill Gates knows he needs to use his money to help others. And how we are meant to be connected to something bigger than ourselves…. But not a word about what that something bigger might be. Nothing about how the reason being so greedy and attached to money is bad is because it gets in the way of our relationship with God. It’s an idol. No, the whole thing was a nice message about not being greedy, but was essentially secular. There are atheists that do as much. They too give money to help their fellow men.

Dom pointed me to a much, much better homily on today’s readings from Father Roger Landry, Ferocious Idolatry and True Wealth. Convicting. And I love that he continues past the point where too many homilies stop. The homily doesn’t just convict you, it gives you suggestions for ways to actually change what you are doing, to live out the Gospel. Who doesn’t need that kind of prompting?

Anyway, I guess there’s another priest to add to my list of priests to pray for. He seems like a nice guy, but maybe just burned out. More like punching the time card, doing a job, than a man on fire for Christ. But how often can the same be said of me?

Still, sometimes God makes up for a lackluster homily by whispering directly into your heart a word you need to hear.

After communion I had to pick up Ben off the floor where he was laying prostrate, half in the aisle. He’d gone boneless when we went up to communion and Dom couldn’t lift him and so had just left him in the pew. How he ended up on the floor, I’m not sure since I was ahead of Dom. Anyway, I picked up the poor boy and held him in my arms. I think he was tired, wiped out from a busy week and maybe not enough sleep. Also he seems to be an extreme introvert, just drained by being in places with lots of people. He spent most of my birthday dinner on the floor under the table. He spends most of the Mass either on the floor under the pew or curled up on the pew. But when we got home he curled up on the couch for a bit and asked me to read him a story. By the end of Tricky Fox he was giggling and vivacious, bouncing off the couch and helping me to make pancakes.

Anyway, back to the Mass. After communion I was holding Ben as I knelt and prayed (having handed the sleeping Lucy off to Dom) and I remembered an image I’d seen on Facebook this week on Pope Francis’ Facebook page, an illustration for Thursday’s reading from Exodus 40:16-21, 34-38 about setting up the Tabernacle. A painting of the Old Testament Tabernacle with the pillar of fire hovering over the tent, surrounded by the whole camp of the Israelites. And I thought of how that amazing glory of God, that pillar of flame, that shining cloud, had come to dwell within a young woman named Mary when she said yes to God. How the fire was hidden, but the same glorious God who blazed in the Burning Bush and the Shekinah glory cloud was within her. Mary literally became the Ark of the Covenant, the Tabernacle, the dwelling of the Most High. Not just during the nine months of her pregnancy but for all time for she continued to ponder the Word in her heart. He dwelt with her always.

And more, how that same glory was now within me. How I too am called to be a tabernacle. How I can have not only the opportunity but the obligation to bring God to others, to carry him forth to the world. St Gianna wrote, “Our body is a cenacle, a monstrance: through its crystal the world should see God”

And how I am called especially to bring Christ to the little ones he has given me. To love and seek to understand this frustrating child of mine who can be so uncooperative and uncommunicative. So I clutched him tight and whispered loving words in his ears and tried to let him know that I do understand how tired and overwhelmed he is and that I’m not mad at him.

All week I’ve had They Might Be Giants’ “Birdhouse in Your Soul” going through my head.

It started when Auntie Francesca and Grandma were offering us various objects as they try to divest themselves of possessions in preparation for their move. Bella claimed a couple of birdhouses and well, the song just came as soon as I thought of the word “birdhouse.”

And then I had to play the song because I can never remember all the words and we had a delicious moment when we caught the lyric about Jason and the screaming Argonauts. I pointed it out to Bella and oh she was thrilled to get the reference. And then we listened to and talked about another song with classical references—Mumford and Sons’ The Cave which mentions the Sirens. Bella made the connection to Odysseus in the Cyclops’ cave too, which hadn’t occurred to me.

Anyway. I got curious about lyrics and looked up the words to Birdhouse and found an interesting Wikipedia article about the song:

The song tells the story, in very abstract terms, of a nightlight with the appearance of a blue canary, from the point of view of the nightlight itself. The summation of its opening statements (“I’m your only friend; I’m not your only friend, but I’m a little glowing friend, but really I’m not actually your friend; but I am”) reveals that while it is not really a friend in the traditional sense of the word, its job as a nocturnal protector of its owner (the listener) makes it their only friend while they sleep. It tells the listener to make a birdhouse (being a safe place for something small and vulnerable) for the light it creates in their mind and soul.

It’s funny how you can listen to a song for years and not really think about it or even know all the words. I’d never really listened to it carefully and had a vague sense that it was about a nightlight, but seeing the song analyzed like that was kind of fun.

But I like the image of making a birdhouse in your soul, creating a safe place for that little light to shine and the bird to sing. Maybe it’s not a bright beacon like the lighthouse that will save you from shipwreck, but a warm glow that helps you know you aren’t alone. It’s a nice image.

Make a little birdhouse in your soul. Maybe that’s why I’ve always liked that song. The imagery might not be deliberately Christian at all, but it works. The Holy Spirit is often shown as a dove, no? And we are meant to make our souls a dwelling place for the Spirit, a dwelling for the light. We are called to be a light to the nations, right? So make a little birdhouse could just as easily be make a little tabernacle in your soul.

But They Might Be Giants get one detail wrong. The light I’m called to bear will prevent any shipwreck, would save all the screaming Argonauts and Jason too….