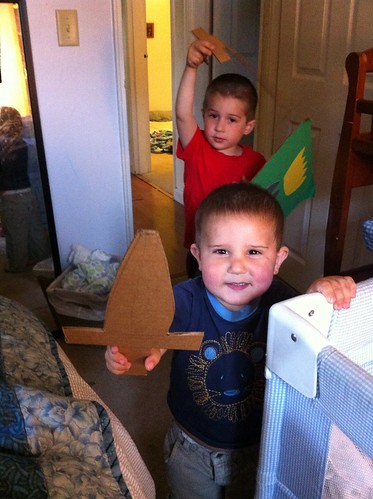 Anthony, who didn’t get to make a shield, was very pleased to be the first one to get a sword.

The day after our field trip to the Higgins Armory Museum I made a few makeshift swords and daggers out of cardboard. They didn’t last long, and neither did the shields, but while they lasted they were glorious. Some excellent battles were waged. 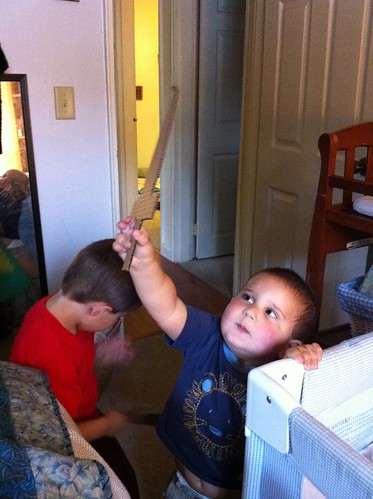 I have the power!

As soon as Anthony got a dagger, he started running around killing people. Bella was his first victim.

Bella’s shield got bird poop on it and was discarded. Ben’s and Sophie’s shield have both been repaired with glue and duct tape. Such is the transient nature of weapons in the hands of small warriors. 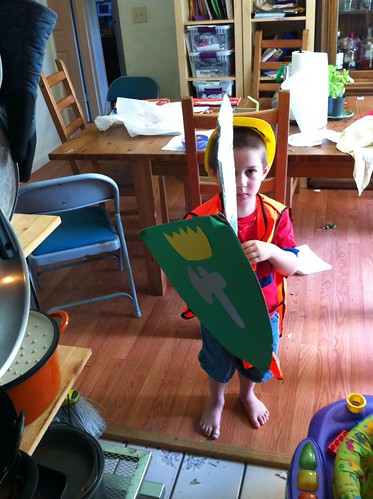 I was reading to the girls when Ben wandered in wearing his hard hat and construction worker vest, which he had attempted to tie up with this super long ribbon he has.  I’m not sure why the ribbon made it feel more armor-like, but there you go. A boy’s gotta do what a boy’s gotta do.

My knight was all dressed up, but had no weapon. That will not do. I took another stab at constructing swords. The cardboard swords were very hard to cut out without a proper Xacto knife and cutting mat. Hoping for something a bit stiffer, I covered paint stirrers with foil. They were shiny and bright. And didn’t last long at all. Anthony found them much too tempting. Well never fear, Ben’s due for a birthday next week and I suspect there might be something a bit more durable for him. I joked that I should add a new title to my job description: Chief Armorer. (I think Dom gets to be Weapons Master.) 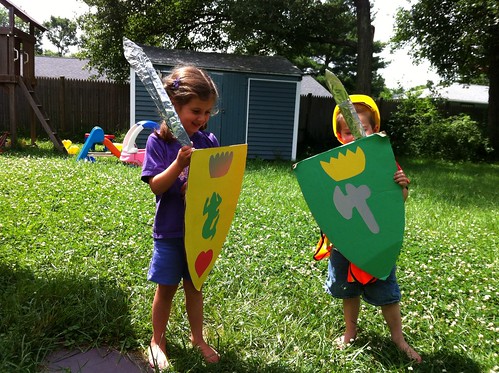 Ben and Sophie all geared up for knightly battle.

I soon realized that we needed to have some rules and I remembered Regina Doman’s Rules for Sword Fighting. 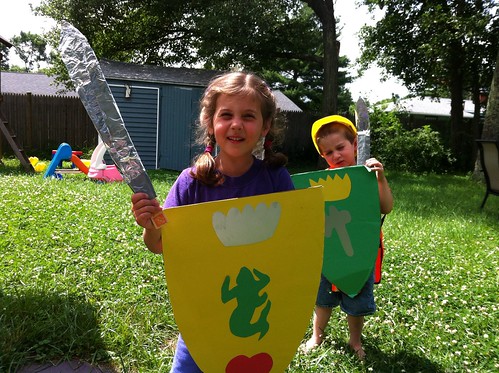 My little knights, ready for the battle. They only lasted five minutes then came in because it was “Too hot!”

. This Ben has taken to be his own special possession, since he was the one who found it on the shelf. I had to convince him to let me read it to the girls the other morning. We had a cozy time sitting on the couch and learning technical terms like “pommel” and “quillon” and “tang” and also the difference between double and single edged blades. At that Bella surprised me with a quotation: ” And a two-edged sword in their hand,” Oh she remembered Psalm 149! Good girl.

Bella has such a great memory. While we were looking at the Hittite warrior I mused that I didn’t think her history book (The Story of the World

) mentioned the Hittites. But she set me straight, explaining that the Hittites had fought the Egyptians and conquered them until the Egyptians learned to make weapons from them. Um, ok. I guess now that you mention it, I remember that vaguely. 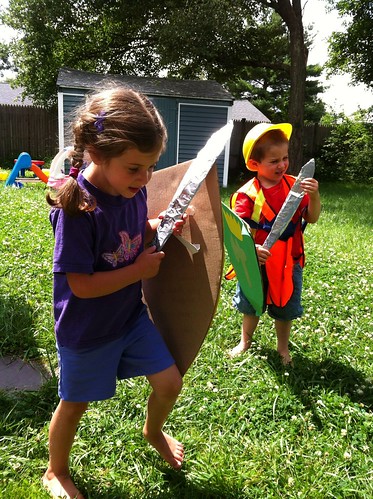