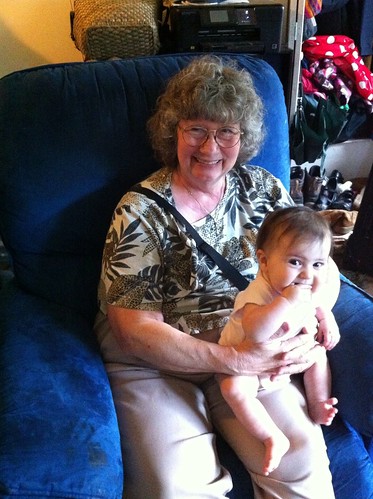 1. So last week Dom went to Denver for the Catholic Media Conference. He was giving a talk on new media and parishes… I think. And on a panel about blogging. While he was away my mom came out to be with me. I was actually a little surprised that she came since my dad just had a stroke two weeks before. But he wanted her to come. He can’t drive yet, but he can walk to church, to the store, and to his speech therapy. And since he hadn’t been swimming, he needed the exercise. So he told her he didn’t need a baby sitter and to come on like she’d planned. And she did.

And we had a lovely time. The kids love having Grandma here. I do too. And I got a few nice pictures of my mom with Lucy. 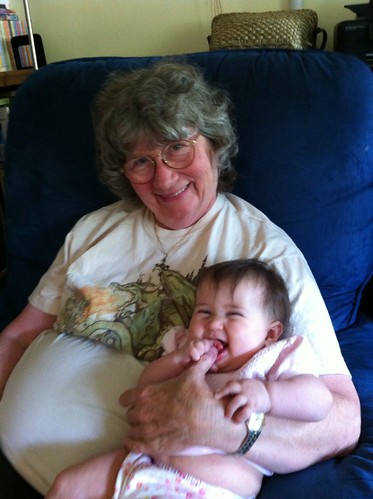 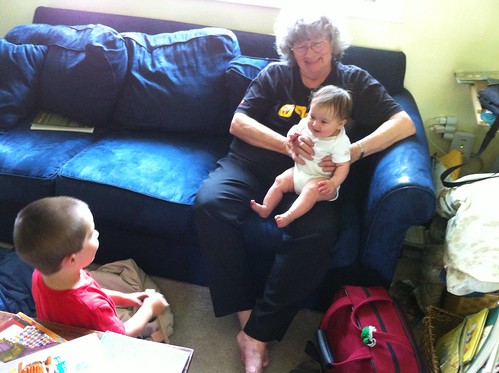 Just look at Ben and Lucy loving on each other! 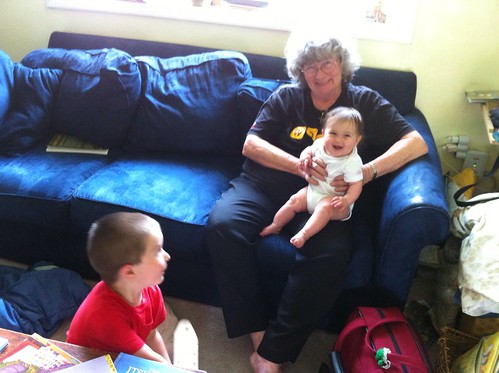 But then she notices Mama. No brother, no matter how wonderful, can compete with that!

2. And Mom got some rare pictures of me. I rather like them, so I thought I’d share. I’m usually the one hiding behind the camera. 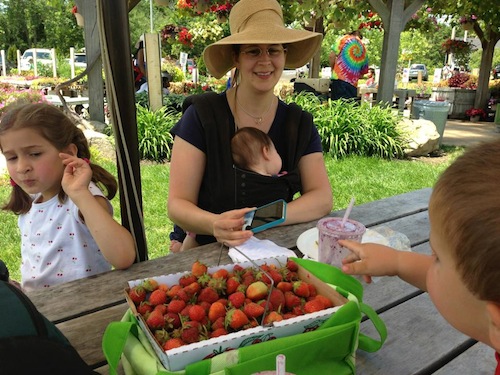 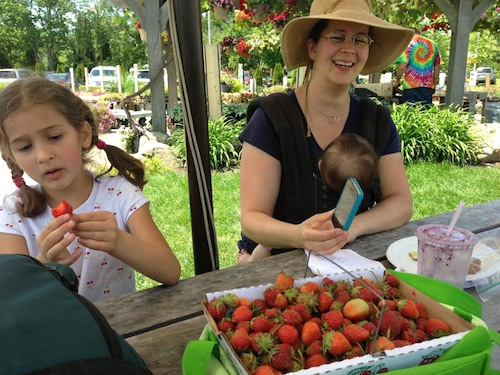 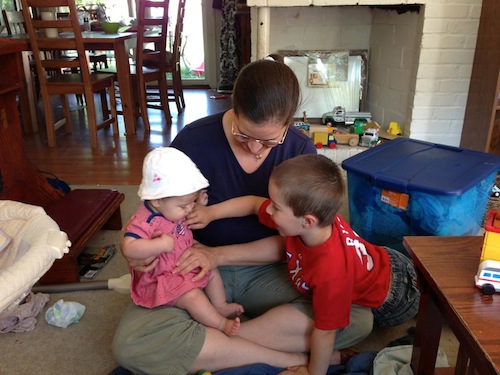 3. Yesterday we finished reading The Children’s Homer by Padraic Colum. Bella is also deeply immersed in D’Aulaire’s Greek Myths. Between the two of them, boy is she in love with the Greeks. The other day I overheard her quizzing Sophie on Greek mythology. From the other room I kept hearing her yell: Poseidon, Troy, Ithaka… This is what I dreamed homeschooling would be like.

4. Bad news: Anthony threw dried shiitake mushrooms all over the office.
Good news: I found out after the big kids had picked them all up.
Really! They picked them up without an adult to ask them to. Amazing!

5. Tuesday morning I heard a rustling behind the closed office door. The three big kids were in the girl’s room and Dom was dressing. What was Anthony up to? Surely no good! I called to him and the doorknob rattled. Sure enough he’d locked it. While I was fetching a butter knife to unlock it, he managed it himself. I opened the door and he immediately handed me a mostly eaten lollipop. Sophie’s lollipop that the fish guy gave her at Saturday’s farmers market. Oh dear. I just had to laugh.

6. Some scenes from our Saturday farmer’s market outing. No pictures of the actual market. Just play at the beach afterward: 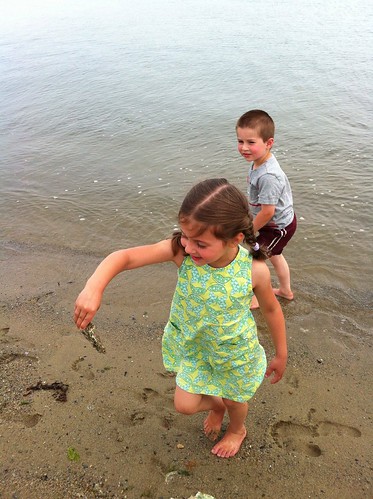 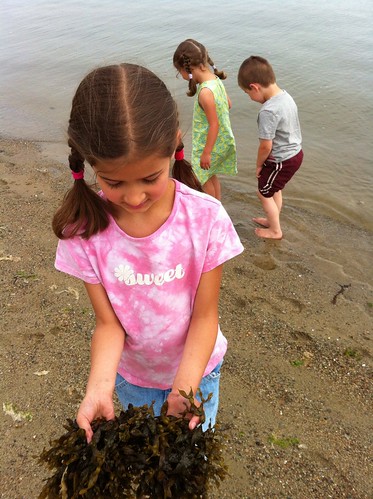 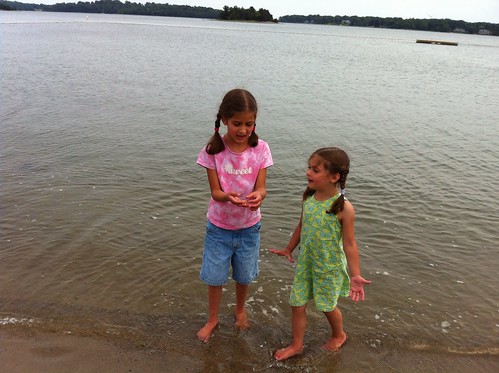 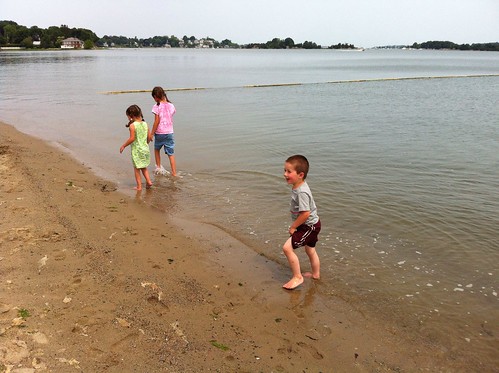 Ben rolled up his pants and ran along the waterline until he—inevitably—went too far and got soaked. 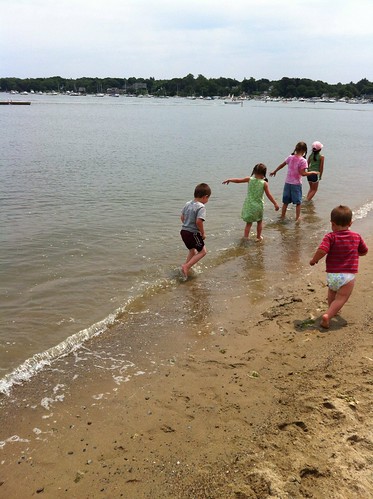 My four plus a friend they made, a little girl who was Bella’s age, but closer to Sophie’s height. 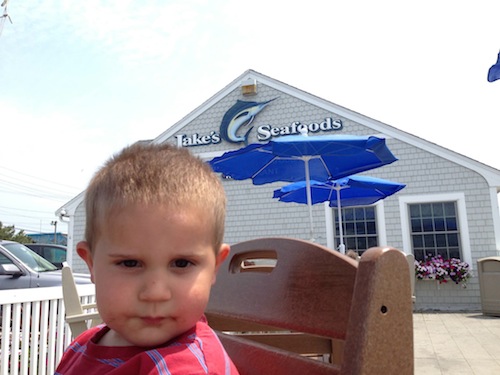 Anthony doing his picture face at our favorite seafood place.

7. Today I popped out to get the mail and all four big kids popped out to to run around the yard. Ben spotted a flock of turkeys in our neighbor’s yard. Three adults and seven or eight babies. I stalked them down the street and then they crossed the street. One of the adult flew up onto a roof and then walked around for a while before flying down again. 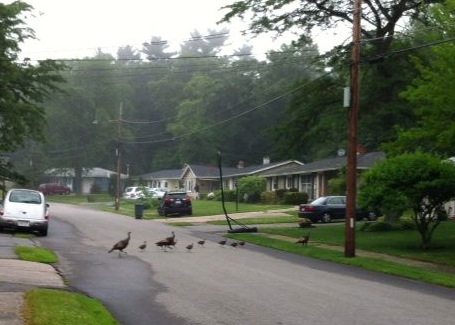