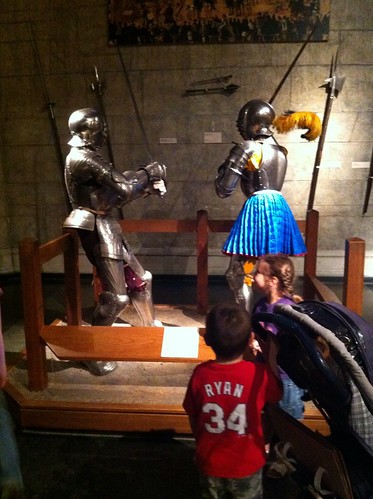 My sister-in-law belongs to a great Catholic homeshooling group which is very active on the North Shore. Unfortunately most of the events are just too far away for us to attend. I pay my yearly dues because they aren’t that much and because they give me access to the group’s members-only website. On Monday a member posted to the group that she planned to take a field trip to the Higgins Armory Museum for their homeschool Wednesday. Dom and I have been talking about visiting the Higgins for forever and realized we’d have to do it soon when we saw the announcement that they are closing at the end of the year and transferring their collection to the Worcester Art Museum. So I decided to jump in on the field trip day. It seemed especially apropos since Bella and I are currently reading Padraic Colum’s The Children’s Homer, and just yesterday read about the armor of Achilles and the death of Hector. Swords and spears and armor have been captivating our imaginations. I knew the boys would love it and Sophie would enjoy it too. 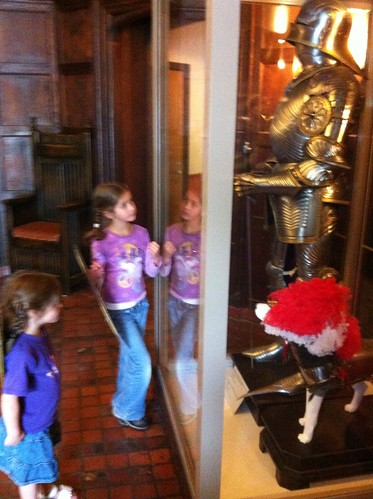 The day got off to a rocky start, but I think it was one of the best field trips we’ve yet taken. First, Ben woke me up at 4:30 or so this morning. Screaming. I went to resettle him and as soon as I walked into his room, got a whiff of what probably disturbed his sleep. Anthony had a dirty diaper. He’s had some digestive issues recently, most likely the result of his general boycott of all fruits and vegetables. I had to turn on a light to change him and then play hunt the diaper cream. All the while Ben was yelling at me to turn out the lights but wouldn’t let me shut the door because he hates to be in his room alone. Dom had to go and sit with him until he fell back to sleep. By the time Anthony’s diaper was changed his eyes had adjusted to the light and he wouldn’t go back to his bed because it was too dark. So I had to settle him on the chair in the living room. And by the time that was done Lucy was awake of course and wanting to eat. And by the time I got her settled my brain was all awhirl. Somehow it had decided that it was the perfect time to compose a new About Me page. After about half an hour of that I decided to just sit up and write the words down, hoping that if I did so I might be able to get back to sleep. By the time I was done my brain was still going crazy. I started Morning Prayer, Dom’s alarm went off, he hit snooze, then Anthony came in to ask for breakfast. Dom got up to help him and Anthony popped into Dom’s place in the bed. Little trickster. So Dom got up and Anthony lay there for some time. Then Anthony got up and left and I finally fell asleep for half an hour. 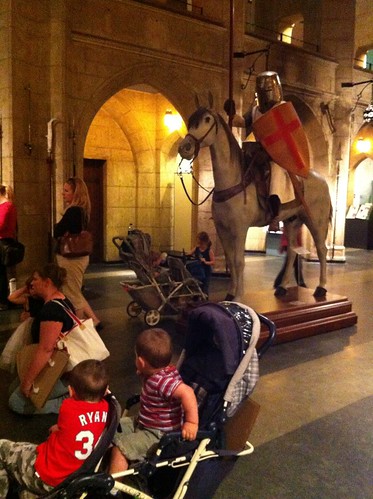 So I got up, made breakfast, made sandwiches and packed a lunch, herded five children into shoes and socks, braided two girls’ hair, fed the baby…. and then couldn’t find my water bottle, realized the car needed gas, the toll tag was in Dom’s car at his office…. We got to the museum almost an hour after I’d planned to arrive and we missed the start of the talk we wanted to go to by 25 minutes. But though the talk would have been really great for Bella to hear, we still had a great day at the museum. 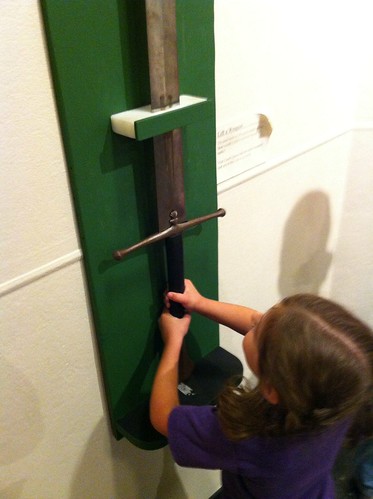 I am so sad to only be discovering this wonderful place just as it is closing. Wow what a treasure.

What began as one man’s passion for metalcraft and tales of chivalry has today become the only dedicated museum of armor in the western hemisphere, housing one of the few significant collections of knightly armor outside of Europe. The founder, John Woodman Higgins, a prominent Worcester industrialist during the early 1900s, spent a lifetime building his collection. In 1929 he began construction of a five-story building to house it, and in 1931 the John Woodman Higgins Armory opened its doors to the public.

The art-deco building, which the museum still occupies today, was one of the first all steel and glass curtain-wall structures built in America; it was placed on the National Register of Historic Places in 1980. Inside the museum’s Great Hall, high ceilings and gothic arches are reminiscent of a medieval castle and offer a powerful setting for the museum’s collection.

The collection, some 4000 pieces in all, includes major examples of arms and armor from medieval and Renaissance Europe, Ancient Greece and Rome, Africa, the Middle East, India, and Japan. On display are two dozen full suits of armor for battle, jousting, and courtly ceremony, in addition to swords, staff weapons, firearms, and artwork from the age of knightly armor. The American Association of Museums in its most recent reaccreditation report described the museum as “a place of national significance … with superb collections.” 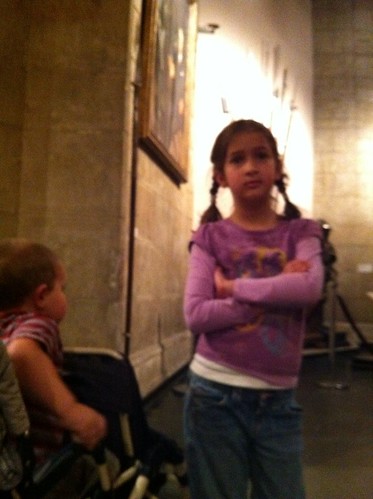 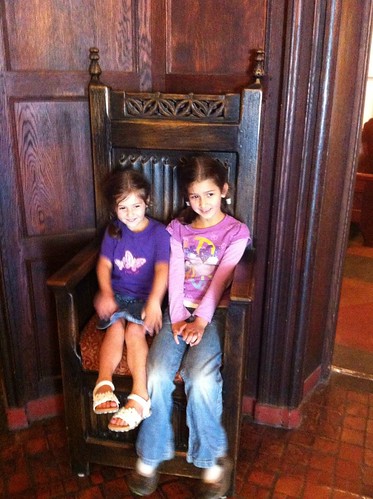 Not only do they have a wonderful collection. They also have great programming and a really fun interactive kids’ room with all sorts of hands on activities. And for $5 apiece the kids got to make their own shields. We did catch most of the story time. (Though Ben was very scared at the dragon—he’s very afraid of dragons right now—and ended up on my lap in tears while I couldn’t leave because they girls were on the other side of the room and enthralled but Sophie was about as far away from me as she could bear to be without bursting into tears herself.

Oh my goodness we all had such a great time. We were there until almost 3 and could have stayed for hours more. No one wanted to leave, not even Anthony was too tired. This is a museum first for us. Usually by 1 he is kicking Ben and getting very grumpy. I think I managed our visit very well. We started off on the third and fourth floors, looking at the collection. Then we had lunch and then we went to the second floor for the interactive stuff and making shields. That meant Anthony and Ben were running around and touch stuff instead of sitting still int he stroller when they hit that grumpy can’t get along stage. I left the girls playing with some of the other homeschoolers thanks to a friend who they know who agreed to watch them while I took Ben off to make a shield. It was great getting to focus just on Ben for a while. Meanwhile Anthony trailed along behind us and tried to hand me supplies and played with the glue and the pencils and paper. I didn’t get him a shield, which might have been a mistake. He felt a bit left out, but then I didn’t really have time to have made one for him. 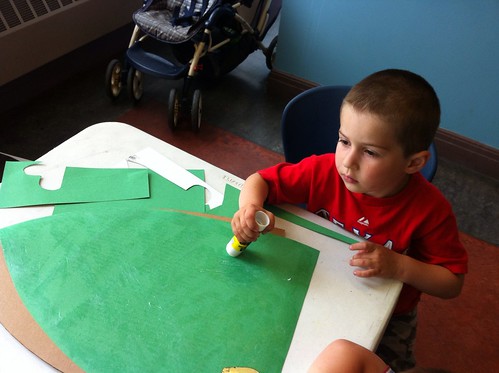 You wouldn’t think to look at him that he was having fun. He just didn’t want me to take his picture. 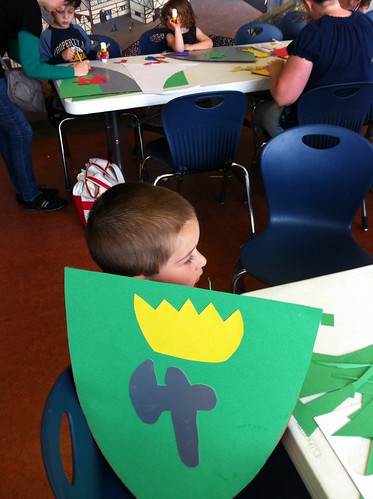 Really didn’t want me to take his picture

The shields were a major success. Ben was very happy with a minimalist design: a gold crown and a silver axe on a green charge. Bella and Sophie both opted for mermaids. Bella created her own little design without the aid of a template, she said it wasn’t a crown, but couldn’t tell me what it was. Sophie had a heart and crown too. I loved that each stencil had an explanation of the significance of the symbol and there was also a chart on the wall explaining the meaning of each color. Bella was very taken with the meaning of her black arrow: black for constancy and an arrow for military preparedness. I told her it meant she was constantly ready to fight to protect those she loved. She really fastened on that, I could see her eyes gleaming. 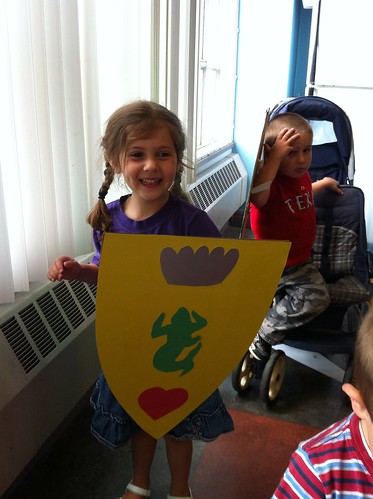 Sophie, on the other hand, is always smiling. 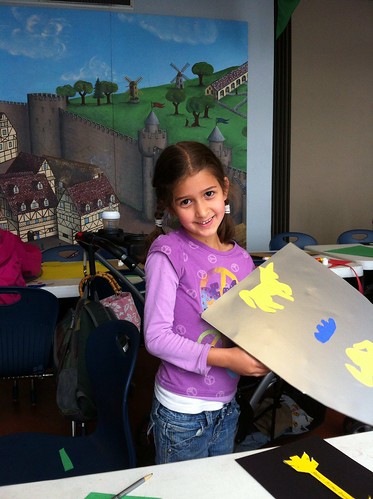 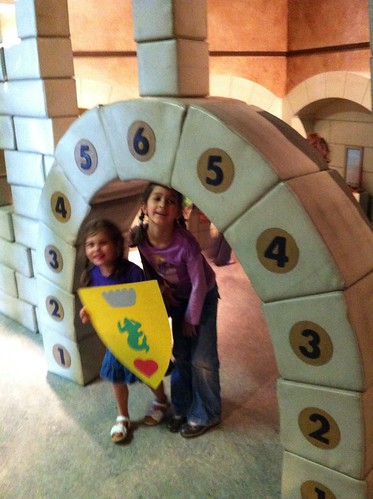 Build your own castle out of foam blocks

Ben really, really wanted a sword like some of the other boys had. I’d already bought them books at the gift shop, so I told him it might have to wait for his birthday. I know what he’s getting: armor and a sword and a knight figurine like the ones he was playing with in the gift shop. 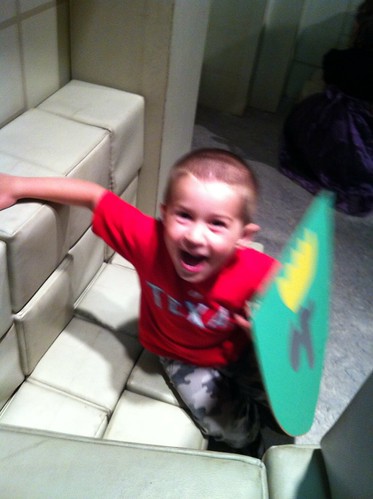 Now, put Ben in a castle with a shield and he lights up. Tonight at dinner he told me how much he liked “the little house.” 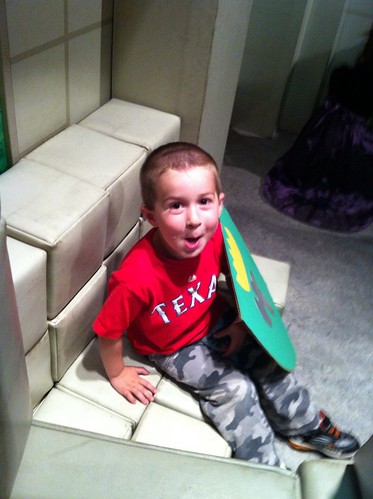 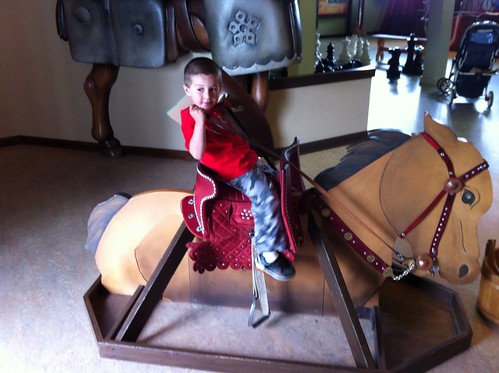 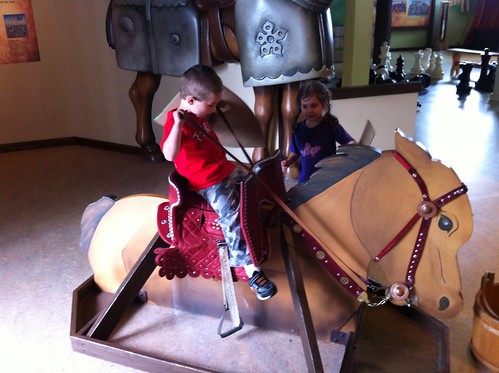 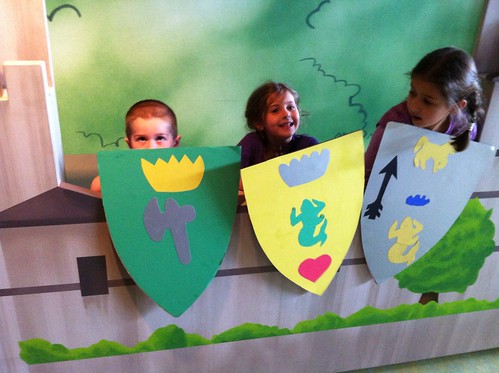 When we got home the three big kids lifted their shields and ran around in the yard in general melee. I had to promise to make them cardboard swords to tide them over till they can get other ones. I also promised Anthony I’d make him a shield. So tomorrow’s activity has already been decided. 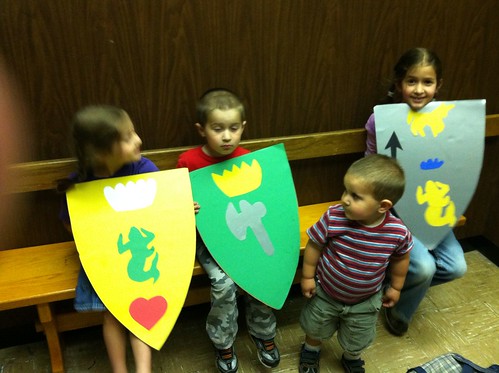 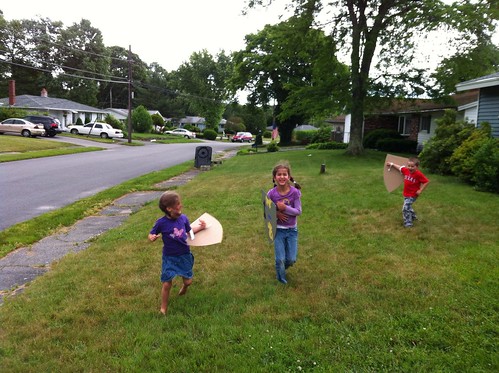 Even without swords they look fierce. 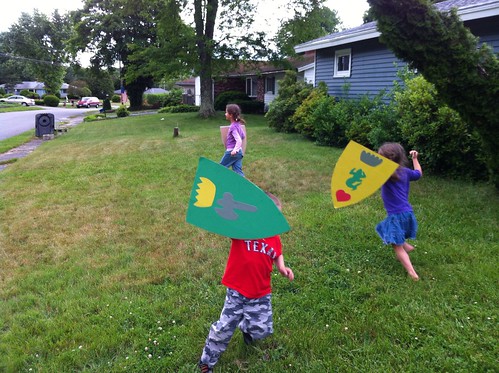 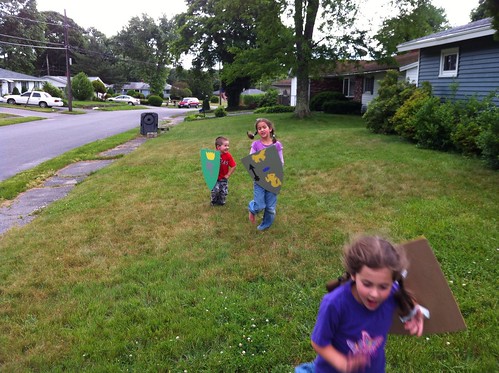 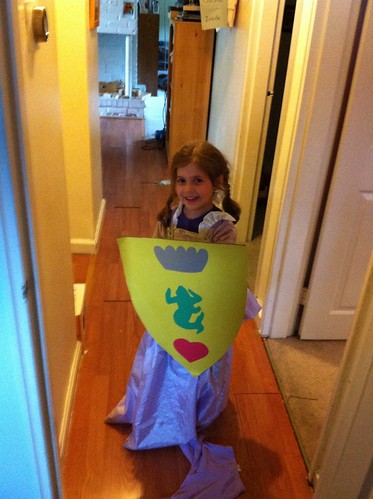 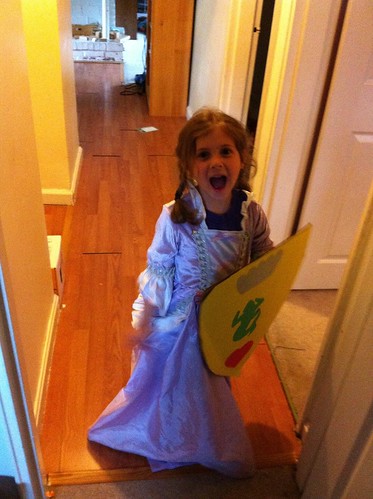 I took all five kids to a museum all by myself and we had an awesome time. Maybe I really can do this after all.