1. Another castle: Ozark Medieval Fortress being built by the same guy building the castle in Burgundy. Unfortunately it seems they’ve run out of funding and aren’t open this year.

2. This: I had a mysterious debilitating undiagnosable illness is for my sister, Theresa, who is chronically ill and may never receive a complete diagnosis.

3. Also for Theresa: Pope Francis Says Lamenting Suffering is a Form of Prayer

Pope Francis went on to speak of the day’s Gospel from Mark 12 in which the Sadducees ask Jesus, if a woman is widowed and marries seven times, which man will be her husband in heaven.

He noted the Sadducees were talking about this woman “as if she were a laboratory, all aseptic” and that “hers was an abstract, moral problem.”

“I do not like it when people speak about tough situations in an academic and not a human manner, sometimes with statistics and that’s it,” he remarked. “In the Church there are many people in this situation.”

The Pope advised people to pray for those who suffer, noting “here is the mystery of the communion of saints.”

“They must come into my heart, they must be a cause of restlessness for me, my brother is suffering, my sister suffers,” he stated.

“Pray to the Lord, ‘but, Lord, look at that person, he cries, he is suffering,’” the Pope said.

Pope Francis explained that because of their prayers, God did not let Tobit and Sarah die, but rather healed Tobit and gave a husband to Sarah.

“Prayer always reaches God, as long as it is prayer from the heart,” he said.

“When it is an abstract exercise, such as that the Sadducees were discussing, it never reaches him because it never goes out of ourselves,” he remarked.

In those cases, the Holy Father asserted, it “is an intellectual game” and “we do not care.”

This week’s daily Mass readings from Tobit and Office of Reading excerpts from Job, two of my favorites.

And a related quote from St Teresa of Avila: “One must not think that a person who is suffering is not praying. He is offering up his sufferings to God, and many a time he is praying much more truly than one who goes away by himself and meditates his head off, and, if he has squeezed out a few tears, thinks that is prayer.”

“We justify dams for the hydropower, flood protection, irrigation water, and recreation that they provide. Yet over time, accumulating silt reduces and then eliminates each benefit. As long as the laws of physics hold, large reservoirs must fill with mud. After Lake Powell fills, the Colorado River will meander across a mud flat and plunge down the face of Glen Canyon Dam in a waterfall that will undercut and eventually collapse the dam. In time, the river will remove the dam debris and lake sediments as though they never existed. Dams imprison rivers, but eventually they annihilate their jailers and escape. Like the truth, a river will out.”

6. Dwija has some nice tips about Homeschooling Kindergarten

7. How to Avoid a People Hangover. Add to the care and feeding of introverts file. I just love the phrase “people hangover.”

8.  A new approach to discipline:

I think our educational system reacts to the action. We need to respond to what is causing the action.

“This is such a paradigm shift, you have to believe in it to make change happen,”

A student blows up at a teacher, drops the F-bomb. The usual approach at Lincoln – and, safe to say, at most high schools in this country – is automatic suspension. Instead, Sporleder sits the kid down and says quietly:

“Wow. Are you OK? This doesn’t sound like you. What’s going on?” He gets even more specific: “You really looked stressed. On a scale of 1-10, where are you with your anger?”

The kid was ready. Ready, man! For an anger blast to his face….”How could you do that?” “What’s wrong with you?”…and for the big boot out of school. But he was NOT ready for kindness. The armor-plated

defenses melt like ice under a blowtorch and the words pour out: “My dad’s an alcoholic. He’s promised me things my whole life and never keeps those promises.” The waterfall of words that go deep into his home life, which is no piece of breeze, end with this sentence: “I shouldn’t have blown up at the teacher.”

And then he goes back to the teacher and apologizes. Without prompting from Sporleder.

“The kid still got a consequence,” explains Sporleder – but he wasn’t sent home, a place where there wasn’t anyone who cares much about what he does or doesn’t do. He went to ISS — in-school suspension, a quiet, comforting room where he can talk about anything with the attending teacher, catch up on his homework, or just sit and think about how maybe he could do things differently next time.

9. I almost never share memes on social media, but this one really spoke to me. Both of those images are lovely pieces of art in their own right. And I think this meme, while funny, points to the crux of why the incarnation is so amazing: God’s amazing condescension. 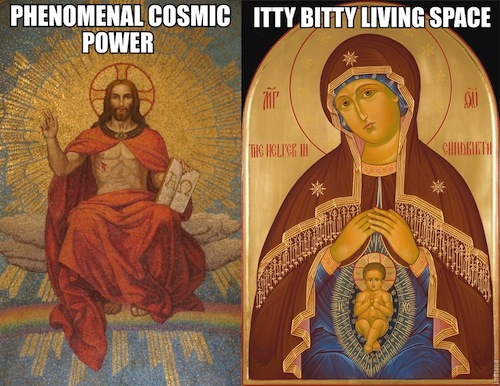