AND ROSE AGAIN: Professing the Creed for the Year of Faith

CREDO: Professing the Creed for the Year of Faith

During a Patristic Bible study at our church, a visiting Monk-Priest was explaining why we do so many prostrations during prayer, particularly during the Great Fast.  First he asked us if we knew why we did prostrations.  “To show humility?” many answered.  “No, prostrations are done to point to the Resurrection, as well as to our own regeneration in Baptism (full immersion in our Eastern Catholic Church) and our repentance and absolution in Confession.  It’s not about the going down; it’s about the getting back up.” 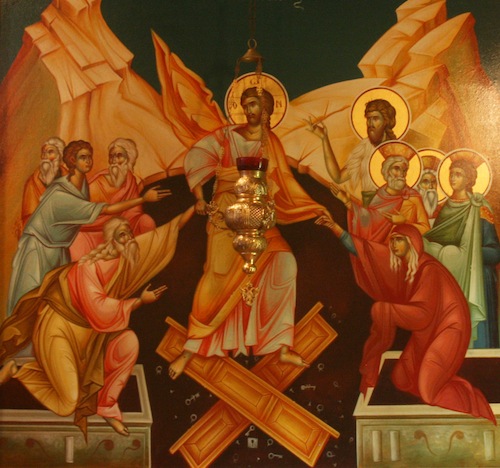 When I first saw an icon of the Resurrection, I was immediately struck by the image.  We see Christ actively pulling Adam and Eve out of their graves, we see the doors of hell broken and trampled upon by Our Lord, we see the chains of hell broken and scattered,  flying through the air.  We see his robes flying behind him, and we see the patriarchs and prophets of old watching with joy as they are actively being released.  This is powerful action.  We are moved by the activity of Christ, the trampling of death by death.  The gates of hell haven’t merely been opened; they have been crushed and trampled, never to be closed again!

This is the essence of our faith.  The Incarnation, the redemption of our human nature, the teaching and the sacrifice of Our Lord on the cross all build and point to this moment; the light bringing, the death trampling, the regeneration of our humanity (notice the brightness of Adams sleeve as he is grabbed by Christ.  The regeneration begins!).  This was not a simple moment in history, as is clearly shown by our first parents being pulled from the grave, by the patriarchs and prophets witnessing with such joy the rescue they have been waiting and longing for through the ages.  This saving action reaches back to the beginning our separation and continues to this day and to every day forward in time.

The very fact that Adam and Eve were in the grave, after willfully choosing the forbidden tree over God, speaks to God’s love for us by giving us freedom.  This willful separation from God led to all of humanity being dragged to the abyss of self-determination, lust for power, and predatory consumption. But Christ, after taking on our nature, is able to regenerate our humanity by a completely opposite action, willfully choosing descent into death and desolation, abandonment and despair.  Thus, by finding Him waiting for us in our lowest of places, we are free now to be pulled from our graves and brought back to the light.

As in a prostration, we are brought low by our own actions, our voluntary and involuntary choices that put ourselves and our corporal concerns above our union with God.  But by Christ’s saving action, we are now able to get back up, by uniting our will and reaching out our hands, feeling the power of our Savior hauling us through the destroyed gates and chains, to the Glory of His Resurrection.

In closing, I would like to share a piece from the book, The Resurrection and the Icon, by Michel Quenot. (page 18).

During the fierce repression of believers, a Bolshevik commissioner in charge of education violently attacked the “outdated” faith of the people, crying out that it bore the mark of capitalism and was not believable.  At the conclusion of the brilliant presentation, the self-satisfied orator invited his hearers to engage in a brief dialogue.  No one was to speak for more than five minutes, and of course, only after having identified himself.  A young bearded priest from a rural background timidly stepped forward and was greeted by the orator with obvious contempt.

“Remember, no more than five minutes!”

Climbing to the podium, the priest turned toward the audience and declared:

They all answered with one voice:

The entire Christian faith is summed up in these words.

Christ is Risen!  Truly, He is Risen!


What are your thoughts? What else can we learn from “and rose again”?

Renee Wiesner is a Romanian Rite Catholic, mom of nine, homeschooler, gardener, and iconography student. She hopes to blog again more regularly at crazyacres some day. Also, she and I share a birthday.

Read all the entries in the Blog Series: Credo: Professing the Creed for the Year of Faith.