Creativity is the Enemy of Tidy
12 comments
Share:FacebookTwitter
Uncategorized

Creativity is the Enemy of Tidy 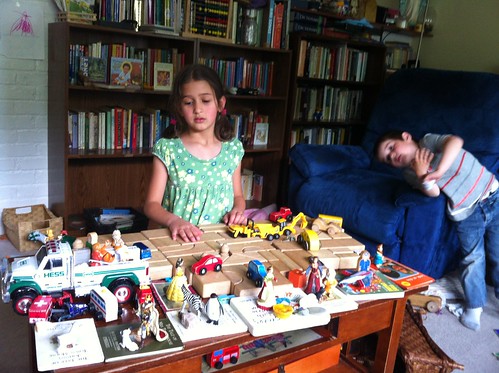 I had one of those flashes of insight recently where you suddenly see things in a new way but it doesn’t necessarily help you to change the way you act.

I realized that what drives me craziest about Bella is precisely the same thing that I adore about her: her creativity.

It drives me bonkers that I simply cannot teach her to clean up after herself and to put one thing away after she finishes with it before she gets out another. I ask her to pick up the blocks and before I know it she’s building something. I ask her to pick up the animals and people and soon she’s playing a game. I ask her to take the blankets back to her room and she’s got one wrapped around herself as a dress and is off in her own world. She’s a princess, a nun, or a saint. I try to work with her on all these things and to be patient with her. Oh but it’s so hard when all I want is for her to help my get the living room just a little tidy before they all go to bed. Fortunately Sophie is starting to take up some of the slack. She loves to help out and there are a few tasks that she’s made her own—when she isn’t being pulled into one of Bella’s games.

But what I realized the other day was that one of the reasons Bella has such a hard time putting things back in the proper places is that she doesn’t tend to see them in the same categories that I do. Oh she’s smart enough to understand how to sort things. But for her the categories are fungible. I see a bunch of headbands and hair ties that need to go in the basket that I’ve set aside for hair things. She sees the raw materials for a fabulous new game. The basket is a ship or a house or a cradle. The hair bands are dresses for princess figurines or fasteners to make her blanket into a dress or… who knows what. She can’t seem to think of books only as things to read. They are building materials, platters for serving food on, paintings to adorn the princesses’ palace….

The world is too full of possibilities and the mundane task of putting things into their proper places is just too boring. To make it more interesting, she tries to make a creative leap and all too soon her imagination takes her far away from what she’s supposed to be doing. Before I know it she’s out the back door and on the swing, she’s making a bed fort out of blankets, or lining up books to be the Great River in Narnia along whose banks Aslan and his brave army are hard at work defeating the White Witch and her minions.

I wish I knew how to inspire her and make the cleaning up into a game but the same tactic won’t work twice. One day she’ll be quite happy being Laura doing chores. The next day the same suggestion will be met with a sigh. One day she’ll be happy as a princess to wipe the table. Another day the same chore will seem to be the Augean stables. Life with Bella is never boring. But I have a hard enough time on my own being structured. When I have to be creative to get her to cooperate…. well sometimes it’s easier to just let her go play and do the work myself. I hate to be a nag, to be constantly interrupting her play to get her to help out. And yet being consistent with my demands…. isn’t going to happen. Life with five kids is too chaotic. Sigh. I suppose I shall have to resign myself to chaos.

Coincidentally, Melissa Wiley is also writing about creativity and mess:

I know it isn’t always easy, especially for type-A parents, to live with the clutter and chaos that so often surrounds a creative mind, but there are ways to compromise. For us, it means keeping the front of the house reasonably tidy, one main room where people can count on an uncluttered space, and letting the rest of the house wear a jumble of raw materials with abandon and zest. The girls’ room is overrun right now with wand-making supplies. The house smells like hot glue. Every time Scott looks at me he finds another piece of glitter on my face—I don’t even know where it’s coming from; it’s in the air.

Along with Freedom to Be Messy goes Lots and Lots of Down Time…that’s part two of my refrain: give ’em time to be bored, time to stare into space, time to tinker, time to obsess. So much of my work as a writer happens when I’m far from my keyboard…I’m writing while I’m gardening, while I’m doing dishes, while I’m curled up under a blanket doing a crossword puzzle. I may look idle, but I’m not. Things are churning in my head. Scott used to do his best writing on the walk home from the subway. Now, far from NYC, sans commute, he stands in the backyard, mind-working while Huck runs circles around him. Our kids know that we’re absent sometimes—lost in our thoughts, working something out—and they understand, they know we try to make up for it by being extra-present, fully engaged, in other parts of the day. But also by giving them that same kind of mind-space in return: big chunks of the day unscheduled, unspoken for. Let me get out of your hair so you can put glitter in it.