Although it was rainy and chilly, we set out for the farmer’s market anyway, hoping to stock up on yummy vegetables. The market did not disappoint. We got chard, baby bok choy, pea tendrils, asparagus, scallions, salad turnips, tomatoes, and zucchini. Also eggs, ricotta, yogurt, feta, and a smattering of sweet treats. 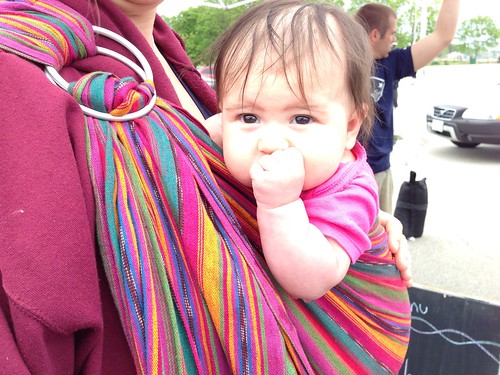 This is actually from two weeks ago. But Lucia hasn’t really changed.

Sweet treats: cake pops for the boys, a chocolate cupcake for Bella, a chocolate chip cookie for Sophie, who savored it in little mouse bites. 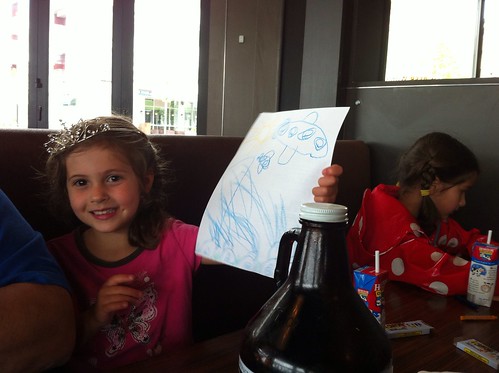 For lunch we splurged and went to Hingham Beer Works. Sophie drew airplanes flying over a row of houses. The waitress spilled my beer and didn’t offer to clean it up. And Ben’s mac -n- cheese didn’t have any salt. But the carrot ginger soup was awesome and so was my beer and the fish and chips were quite nice.

For dinner we cooked up a nice chicken stir fry with a side of stir fried greens. My new favorite dish is baby bok choy and pea tendrils cooked with onions and red bell peppers with a splash of soy sauce and a splash of fish sauce. Yum! Since I had the turnip greens, I added them too. I was afraid they might make it a bit bitter, but spring salad turnip greens are still young and tender I guess. 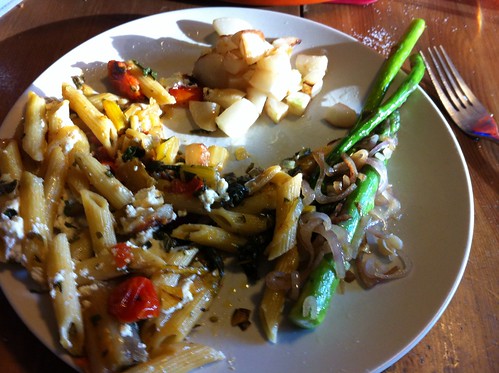 On Sunday night we had more of our bounty: I made asparagus with shallots; new turnips sautéed in butter; and penne with chard, roasted cherry tomatoes and roasted garlic, with oregano from our garden, and farmer’s market ricotta.

This is the recipe I worked from for the penne: Penne with Swiss Chard and Ricotta

I didn’t cook the chard in water, though. That seems like a waste. I just sauteed some onions in olive oil, then added the chard stems and cooked until soft. Then I added some red pepper flakes and minced garlic and cooked until the garlic was fragrant. Next I tossed in the chard and stirred until it was wilted. I stirred in the cooked penne, roasted tomatoes, chopped fresh oregano from our garden and some salt, pepper, and Parmesan. Then I dotted the ricotta on top and put the lid on. Cooked on low for about five minutes. Then added the roasted garlic at the end because I forgot it.

I do love cooking when I have fresh ingredients to challenge and inspire me.

My brother-in-law’s Memorial Day pool party, which doubled as a graduation party for Dom’s nephew Joe, was postponed to Monday due to rain. But today’s weather was glorious, so it worked out well. It’s always fun, lots of big Catholic familys, dozens of kids from infants in arms to teens home from college. 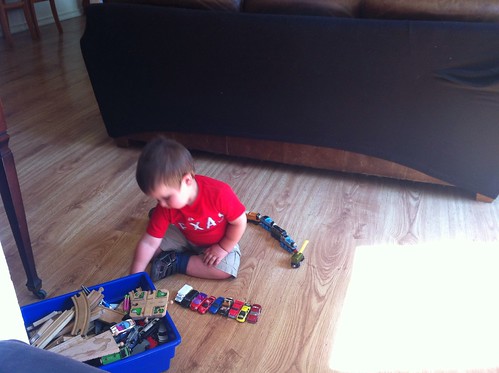 Anthony and Ben chose to spend most of the party inside with the cars and trucks. Though Ben did join his sisters in playing in the pool. We got there early so they were able to get in some pool time before the crowd got too thick.

Anyway, at one point I went back into the house after having been outside chatting and a horde of teenagers had descended and were playing on the piano, which is immediately to the left, you can just see one leg of it at the edge of the picture. Poor Anthony looked like he was trapped in that corner, he didn’t know what to make of the crowd. And he was standing there with only one shoe on. The other shoe was on the other side of the piano. I took pity on him and reunited him with his lost footware. 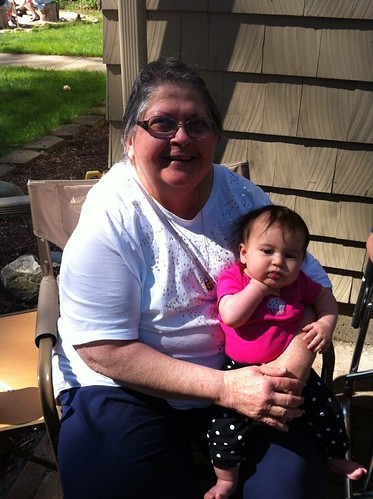 Lucia got cuddle time with Grandma Virginia. I think she was held by half a dozen different people. She’s the kind of baby who will fall asleep in a strangers arms. So easygoing. 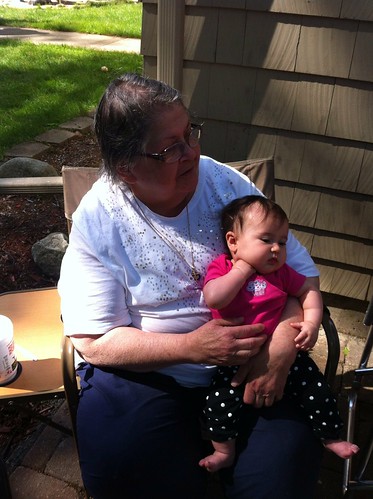 The boys fell asleep in the car on the way home. I’m afraid it will be an interrupted night since neither of them ate well at the party. I think they had watermelon, chips, cake, and cookies and more chips. Kids who don’t like hamburgers and hot dogs are hard to take out. (I did bring a peanut butter tortilla for Ben, but I thought Anthony would be more willing to eat what was there. He wasn’t.)

The girls were delighted to have a bit of boy-free freedom. They lingered in the front yard, chalking in the driveway until bedtime. (Sophie actually got a bit anxious at being out in the front yard without me. She knows it’s usually against the rules and she hates it when boundaries are crossed and rules are violated. At least sometimes she does.) 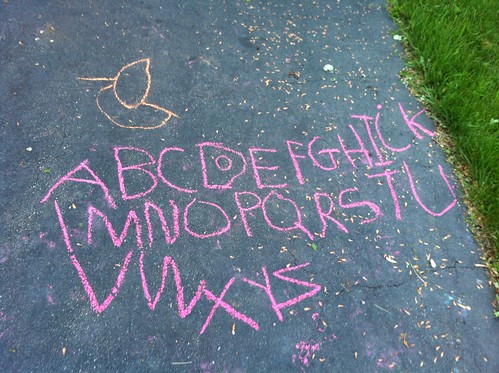 Bella wrote out her alphabet. 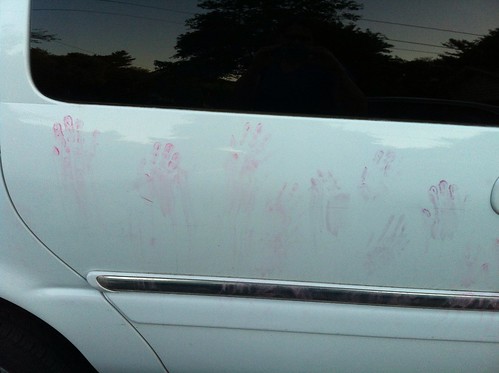 They decorated my car with pastel hand prints. 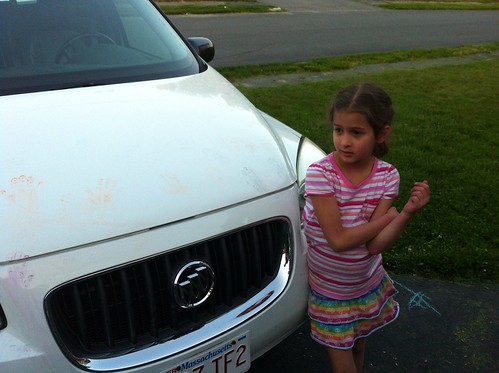 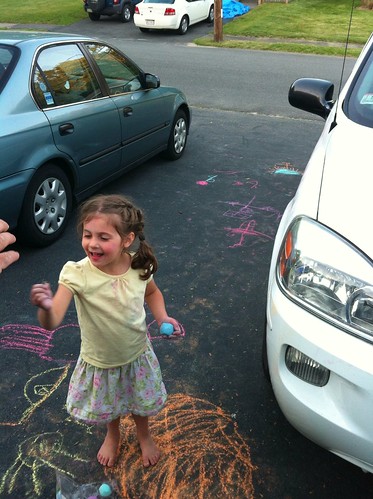 Her partner in vandalism. 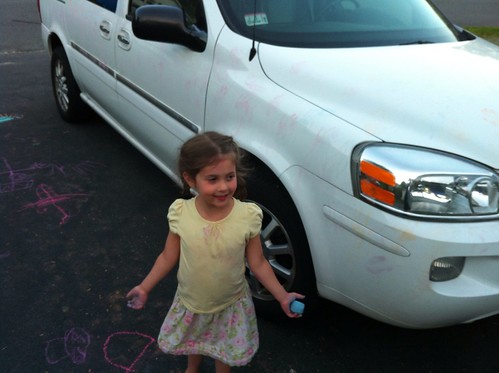 She got almost as much chalk on herself as on the driveway. 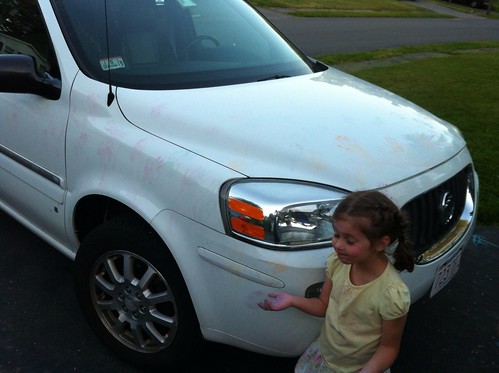 I love this expression. Classic Sophie.

I ate too many chips and sweets too. And my introvert batteries are now quite low. Though there were many people I love to talk to, all the conversations were all too brief and very interrupted, as things tend to be when most everyone else is looking out for four or five or six or seven children too.

Summer is off to a good start. Ready, set, go….