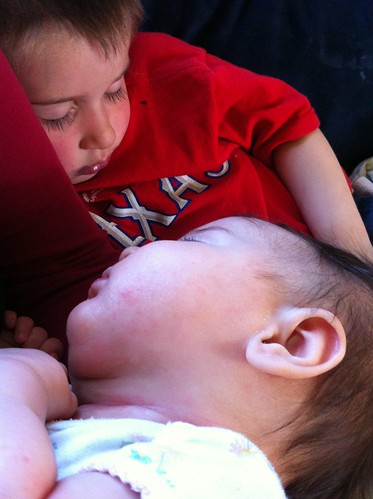 Poor tired Ben fell asleep while I was reading stories. So did Lucia, but that’s expected from her.

1. The latest in Ben and his refusal to use proper names: I’d sent the girls to their room to calm down before bed and I wasn’t letting Ben go in because they were all in crazy mode and feeding off each other. He complained and said he really wanted to go in because, “I really like one of them.” I was cracking up so much. Which one does he not like?

2. Bella made me stop the Office of Readings to tell me that she loves the line, “no speech, no word, no voice is heard.” It’s just so beautiful, she said. Oh yes. I love that line too.

And this morning I was listening to the Divine Office podcast when someone interrupted. Anthony was listening and seemed disturbed when I stopped the Invitatory, cutting it off after the first word, “Come” and he repeated, “Come,” and then added “worship.” Someone has been listening.

3. I’ve been reading The Lion, the Witch and the Wardrobe to Bella and Sophie. After the first two chapters Sophie adopted it, declared it was her favorite book. She demands I read it first every day during story time. Bella was very unsure at first. That scene when Lucy walks into the wardrobe and finds trees and snow…. Bella got very agitated and almost wanted to stop reading. Very disturbed by how uncanny it is. Sophie was a bit unnerved too. But the fact that the youngest Pevensie is called Lucy—and our youngest is Lucy too!—won them over.

After the second chapter Bella speculated: “I wonder when we are going to see the lion.”

When we got to the chapter when Edmund sneaks out it occurred to me how significant it is that he leaves at the end of a meal just as Judas left at the end of the Last Supper. Reading a chapter a day to the girls definitely slows me down and gives me time to pay attention, to make connections, to ponder more deeply.

When we got to Aslan’s death at the Stone Table Bella said something about how she didn’t cry, but could imagine Susan and Lucy crying. I went ahead and read the next chapter. I couldn’t let them wait overnight with that hanging over their head. I just couldn’t. I loved Bella speculating about the witch’s magic being undone with the statues. She was so pleased when we got to that bit, but Sophie was worried about how the witch was going to react when she found out they had raided her house and freed the prisoners. She kept saying she wanted to know if the witch was going to be mad. Bella noted that Lucy and Susan are the main characters, especially at the end. She also wondered what Peter and Edmund were doing while Aslan was waking all the statues. I love to see her pondering the story, really thinking about it. She told me today that it makes her feel all quivery in her stomach. Sometimes a scary sort of quivery and sometimes a joyful sort of quivery. Bella wondered whether they would notice that the children were gone.

Sophie misses a lot of details and even some major plot points. She wondered if the children’s mother was going to miss them. She asked, “What is Narnia?” But she does love the story. Oh how she loves it.

4. Laughing Lucia. I put the kids in the car and ran in to get something. When I came back out I heard Lucy belly laughing at the big kids. She has such a delightful laugh and she laughs often and long.

More laughing Lucy. The children all love to make her laugh. Ben perhaps most of all. He really does dote on her and it is so sweet to see.

5. Sophie and Bella have learned how to say the Act of Contrition. I’m amazed at how quickly they picked it up. All it took was adding it to our bedtime prayers. After just a few weeks they are now rattling it off on their own Trying to decide which prayer to add next.

Sophie recited it perfectly without hesitation right before I took the video. But the camera must have distracted her. She needed Bella’s prompt in a couple of places.

6. Ben tells me he and Sophie are playing a game called Tom and Anna.

Me: Characters in a game you’re playing? And what do Tom and Anna do?

Ben: They are construction workers and football players.

Sophie: They work at a construction site and play football on the field.

Me: So Sophie is Anna and Ben is Tom?

Ben: And there are soldiers too. They are in Merica.

Me: Oh. And where is Merica?

7. Anthony has been waking up at 5 or 5:30 the past few weeks and I’ve been blaming that early morning disturbance both for my sleeping in and for my lack of productivity. Today I was presented with proof positive. Anthony and Ben both slept through the night and so instead of sleeping until 7 or 7:30 I was up at a quarter to seven. I got up before any of the kids, prayed, made breakfast, (They got up when I was in the middle of making the oatmeal.) made scones, tidied the kitchen and dining room, did math with Bella, vacuumed and tidied the girls’ room, weeded the garden bed, fed the baby a couple of times… all before lunch. Phew!

Then I took a short nap with Anthony when I put him down for his nap. Then I read to the big kids, went out and kicked some balls around in the back yard with the kids, took out the trash, weeded the front beds, vacuumed the living room, swept the dining room again, made dinner.

Too late for last Friday. Too early for this Friday. Who cares. I’m going to post this anyway.