Ok I’m not on Pinterest. I do have an account, but I’ve pinned all of two things, both when I had this idea of doing a page of patron saints links or something like that. I never but never go to Pinterest.

But I like Dorian’s low bar getting stuff done concept. And she said that we could participate in the link up even if we aren’t on Pinterest. She said it. So I thought I’d just go ahead and do a post. Ta da! 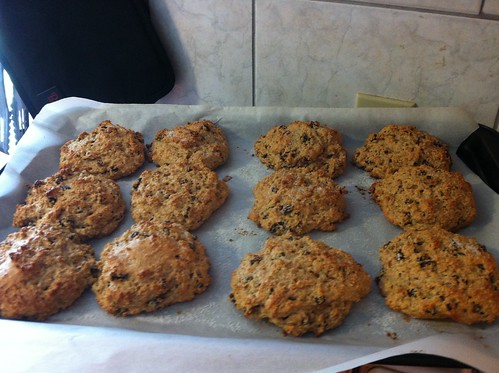 See I made scones. For the first time in, I don’t know, forever. Certainly I haven’t made them since I’ve been married.

So this is how it happened. We were reading a book, Audrey of the Outback

it was, in which the mom makes the kids scones, Sophie wanted to know what scones were. And I tok pity on the poor deprived child and looked up a recipe and made them the very next day. Weren’t they pretty? Ok, so they’re not the pretty rolled triangle ones or circle ones. These are the dropped kind which are much faster and easier to make. And just as yummy.

I have made these scones three times since then and I think they may be my new favorite treat. They are so quick and easy to make and only 1/4 cup of sugar, much less than cookies or banana bread or pumpkin bread. I made them with whole wheat flour and they have yogurt and eggs and lots and lots of currants, so I didn’t feel even a little bit bashful about letting the kids eat them for lunch. Yep, I served them scones for lunch not once but twice.

See all the Pinishers this week at Scrutinies!